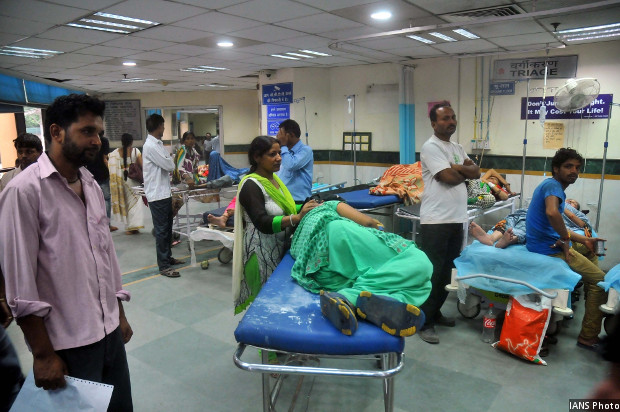 People suffering from dengue and chikungunya being treated at a Delhi hospital. The incidence of these diseases is regarded as under-reported in India, but official data do indicate that while they are now of public concern--thanks to high-profile deaths in relatively wealthier cities, such as Delhi and Mumbai--the majority of cases are reported from poorer areas.

It was this tweet that put the mosquito's long-running silent ravages across India centrestage--all because it happened in India's capital:

(If you want to do politics, then come out into the open. First you were pimping for Congress and now for Modi? Such people have ruined journalism.)

(Say two words about your master who wants to ‘conquer’ the world?)

These responses from Delhi Chief Minister Arvind Kejriwal to journalist Shekhar Gupta illustrated the growing tension in India's capital over chikungunya, a painful but previously non-fatal mosquito-borne disease that has claimed 12 lives in Delhi this month.

While the deaths in Delhi have focussed national attention on a disease--marked by fever, headaches, acute joint pains and, now, organ failure--that has resurged since 2012 after a 32-year hiatus, 77% of all chikungunya cases in 2016 (until July) were reported from Karnataka, according to government health data.

Chikungunya is one of four major mosquito-borne diseases reported across India. The others are malaria, Japanese encephalitis (JE) and dengue fever. The incidence of these diseases is regarded as under-reported in India, but official data do indicate that while they are now of public concern--thanks to high-profile deaths in relatively wealthier cities, such as Delhi and Mumbai--the majority of cases are reported from poorer areas.

Odisha reported 45% (112,963) of nationwide malaria cases this year, till June 2016, according to data released by the minister of health and family welfare to the Lok Sabha (the lower house of parliament) in July 2016. The most deaths from malaria were reported from West Bengal: 27 of the 57 nationwide.

Similarly, national news about dengue has focussed on Mumbai and Delhi: A Bharatiya Janata Party member of legislative assembly from Gujarat died in Mumbai’s Hinduja hospital, as did two women; Maharashtra reported 723 cases, according to this Times of India report.

Kerala reported the highest number of cases (3,767), with five deaths, until July 2016. As many as 13,663 dengue cases, with 21 deaths, were reported nationwide over the same period.

There has been a 32% rise in vector-borne diseases over the last five years, but the budget to combat them rose 7%, IndiaSpend reported in March 2016.

JE is the other mosquito-borne disease surging through India, IndiaSpend reported in August 2016. It has not been reported from leading metropolitan cities and has not gained attention. Assam reported 67% cases of JE--a viral brain infection--and 90% of 70 deaths nationwide, according to July 2016 data released to the Lok Sabha.