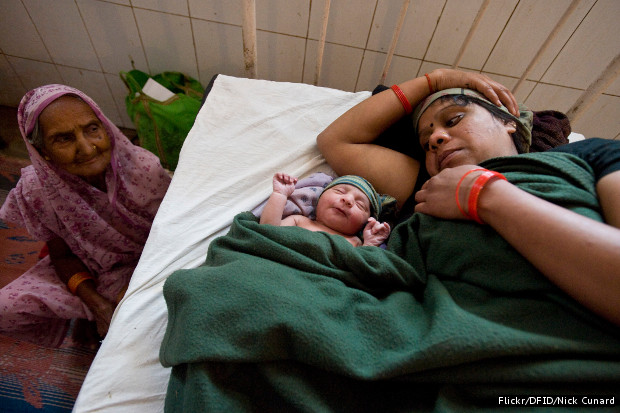 More mothers are being kept safe and alive thanks to a government programme, but its unintended consequence in high-population-growth states could be an increase in female fertility, a new study has found.

Between 2006 and 2008, the Janani Suraksha Yojana (JSY), a decade-old central government scheme that pays women up to Rs 1,400 to give birth in government health facilities or accredited private health centres—to lower maternal and neo-natal mortality—may have resulted in a 7% to 12% rise in the probability of childbirth or pregnancy in 10 states, said the study by Arindam Nandi, fellow at the Center for Disease Dynamics, Economics and Policy, USA, and Ramanan Laxminarayan, vice president, Research and Policy, Public Health Foundation of India, and director and senior fellow, Center for Disease Dynamics, Economics & Policy, USA.

With a fertility rate of 2.6 children per women, India’s population is on course to reach 1.5 billion by 2050, as IndiaSpend has reported. But most southern states—except Karnataka—have seen fertility levels fall below the replacement level of 2.1; unlike many northern and central states.

In the decade ending 2011, when India added 181 million people—or 80% of the population of Brazil—the world’s fifth-most populous nation, this group of eight states recorded a 20.92% population growth rate versus the rest of the country’s 14.99%. These states are called the Empowered Action Group (EAG), a particular focus of the government to stabilise their population through aggressive family-planning measures.

Safe motherhood is important—so is stabilising the population

The country will account for close to a fifth of 303,000 maternal deaths globally this year, as it will one in four of the world’s 2.7 million annual neonatal deaths.

Trading off population stabilisation against safe motherhood is not an option. Although “unintended,” to quote Nandi and Laxminarayan, this fertility effect of JSY may require redesigning the programme.

JSY identified 10 poorer states with low institutional delivery rates prior to the commencement of the scheme as low-performing states (LPS). These include the eight EAG states, Assam and Jammu and Kashmir (J&K).

With such results, the idea that JSY might be surreptitiously spurring population growth is a come down. Yet, that is what Nandi and Laxminarayan postulate.

Their conclusion, as we said, was that the probability of childbirth or pregnancy in poor states increased by 7% to 12% after the JSY.

“What this suggests is that the monetary incentive could be encouraging couples in LPS to have more children or to have their next child faster,” explained Laxminarayan.

“Quality of life, providing for one more person, probably wouldn’t figure in their (poor, rural folk) thought process; getting paid Rs 1,400 all at once for having a baby would,” said Nandi.

Not everyone buys this theory.

“Pregnancy would keep women from working, which would lead to a loss of income. Giving birth at a health facility costs money too, an average of Rs 2,175 in government health facilities as per the third round of the District Level Household Survey,” said Ambrish Dongre, fellow at Centre for Policy Research, New Delhi. He has analysed the impact of JSY.

Dongre argued that Rs 1,400 would barely cover delivery costs, let alone provide for a family of four for a month. Women who aren’t from below-poverty-line (BPL) households and have had additional pregnancies would especially not have had another pregnancy just because of the incentive, said Dongre.

If the rise in fertility is an outcome of couples thinking—‘who knows how long JSY will remain in force, we might as well have our next child sooner’—that, too, is undesirable.

“Less spacing between two consecutive births increases the chances of neonatal mortality or worsens health outcomes for the second-born. This would lower any neonatal health gains from JSY,” said Laxminarayan.

It could even be that the ASHAs are encouraging couples to have more children and to opt for institutional deliveries for their own gains.

How can the design of JSY be tweaked for better outcomes?

Nandi and Laxminarayan believe that their paper shows the design of government programmes needs to be mindful of unintended consequences that persist in the long term. They suggest these measures to counter JSY’s fertility effect and to strengthen the programme design:

Distributing contraceptives and counselling women on spacing and spacing methods are also a responsibility of ASHAs but studies show they don’t take it seriously.

The use of modern contraceptives in Uttar Pradesh, a LPS, increased from 20% to 28% during the four year period starting in 2005, when JSY was introduced. Only 2% of this is attributable to the role of ASHAs/JSY, according to this Population Council study.

Another Population Council study showed JSY hasn’t impacted contraception at all in Bihar, another LPS, over the same period.

It could be time to put family planning on the radar again.

A 2012 central government directive introduces incentives for ASHAs who successfully convince couples to space the births of their children.

“What would additionally help is introducing a minimum waiting period for cash benefits between two consecutive eligible births,” said Nandi.

Limiting benefits in poor states, as in richer states, should help

If JSY’s fertility effect persists in the long-term, it would be useful to limit the benefit in LPS to two live births per woman as in HPS.

However, Nandi suggested this change be made only after improvements in health outcomes, such as achieving near-universal institutional delivery or after reducing neonatal mortality from the current rate of 29 per 1,000 live births to the average rate of developing countries, about 20 per 1,000 live births.

“JSY was never intended to be a forever scheme but to remain in force until women have been weaned away from home deliveries, so to speak,” said Uttekar.

“If JSY has led India’s population clock to tick a bit faster, it’s best to focus more on family planning and to split the incentive into parts until that goal is achieved.”