The rejection of Yakub Memon’s mercy plea by President Pranab Mukherjee has once again brought the issue of mercy petitions to the limelight. While some presidents were kinder, others were not, according to Factly.in, a data-journalism portal.

However, there is no consistency in the decisions taken by different presidents, While Pratibha Patil rejected only 14% of the petitions that came to her, Pranab Mukherjee rejected 92%, the most by any president since independence.

Since 1948, a total of 4,802 mercy petitions were handled by presidents, 3,238 were rejected. In 1,564 petitions, the death penalty was commuted to life sentence, Factly.in reports.

How the mercy petition works

Under Article 72 of the Constitution, the president has the power to grant pardon and decide on mercy petitions. There is no time limit specified. But, the Supreme Court has observed in certain recent cases that delays in disposal of mercy petitions may be minimised and that the condemned prisoners have a right in insisting on a decision within a "reasonable time".

Though it appears that the President has sole discretion, former president Patil, in a press release issued in 2012 said that the President takes the decision only with the aid and advice of the Government of India as per Article 74 of the constitution.

As per information available with the government and data compiled by Bikram Jeet Batra in his book ‘Court of Last Resort’, the number of mercy petitions filed & disposed by the president have fallen substantially over four decades.

The decline in death sentences in general could be due to the impact of the new Code of Criminal Procedure, 1973 which made life imprisonment the punishment for murder, and death sentence the exceptional punishment, according to Batra. In the late 1970s and the early 1980s, the death penalty was a subject of great controversy in the Supreme Court, leading to the landmark Bachan Singh formulation of the death penalty being awarded only in the ‘rarest of rare’ cases, wrote Batra.

This looks like a plausible explanation for the fall in death sentences and mercy petitions to the president after the 1970s.

Drop In Mercy Petitions Adjudged After 1974

No uniformity or logic in commutations or rejections

There seems to be no uniformity in either the rejection of mercy petitions or commutation to life sentences.

Commutations accounted for 24% of the decisions in the first few years after independence, rising to 29% between 1995 and 1964. The highest percentage of commutations (more than 50%) was during the period 1965-1974, when V V Giri & Zakir Hussain were presidents.

A cursory glance at the data for the past six presidents reveals the complete lack of consistency on mercy petitions.

Name of the President 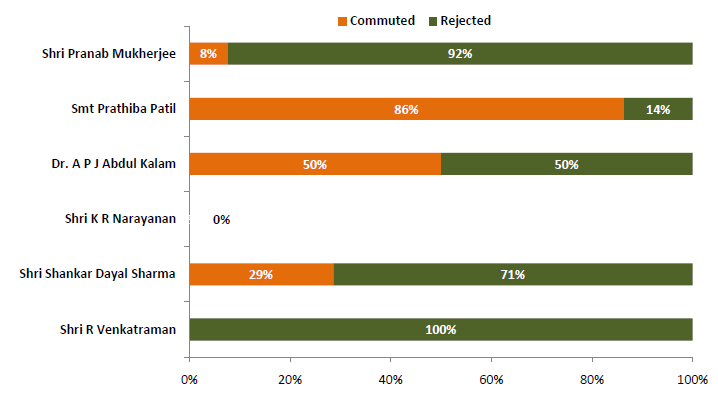