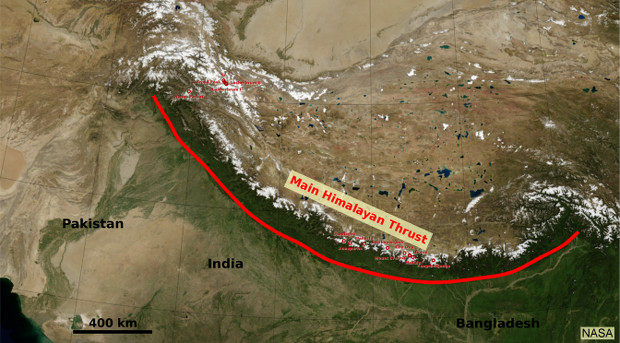 There is a possibility of a more severe earthquake in the Himalayas--although it isn't certain when--than the 7.9-magnitude tremblor that devastated Nepal on April 25, according to the latest research.

"We are most worried about it," Stanford University geophysicist Simon Klemperer told IndiaSpend, referring to the section of what is called the Main Himalayan Thrust, the primary faultline or fracture along which India grinds into Asia at about 2 cm every year. About 400-km long, that section of the fault lies west of Gorkha--epicentre of the Nepal earthquake--and extends to the Kumaon-Garhwal region of India.

A slew of papers---in Geophysical Research Letters, Nature Geoscience, Science---have provided a better understanding of what is now called the Gorkha earthquake, the geological stress that caused it and which was only partially released.

Jean-Philippe Avouac, director of the Tectonics Obervatory at Caltech in the US, and author of many recent studies, said data collected over the last 10 to 15 years reveal that everywhere along the Himalayan arc, the Main Himalayan Thrust faultline is locked from the surface to beneath the Himalayas over a distance of about 100 to 120 km.

This is not good news because faults often move or ‘creep’, without posing any danger. But, in the Himalayas, there is no ‘creep’ as such, which means that strain-energy is building up.

“The locking implies that stress is building up to be released in future earthquakes," said Avouac. "We would have loved to see the fault creeping aseismically (some faults do), and the seismic hazard would have been reduced, but this is clearly not the case.”

The interseismic coupling is shown as shades of red. A coupling value of 1 means the area is fully locked, while a value of 0 means fully creeping. The green and black arrows and ellipses show the continuous and campaign GPS velocities, with their error bars, respectively. The blue arrows are the modelled velocities, which fit with the coupling shown. The large red arrows show the long-term velocities in each region. The dashed black lines show the separation of the regions, within which the long-term velocity for that region is calculated, as shown by the large red arrows. The solid black lines, labelled at 10 km intervals, show the depth contours of the fault plane. The labels INDIA, SHILLONG, and ASSAM refer to three blocks which are assumed to be rigid.

What the Gorkha earthquake did

The Gorkha earthquake rearranged the region horizontally and vertically, pushing Kathmandu up by a metre and a half and pushing down many of the surrounding high peaks by between half a metre to a metre, Tim Wright, a geophysicist at the University of Leeds in the UK, told IndiaSpend, after examining the latest data.

The second earthquake on May 12, said Wright, “changed the height of peaks again, causing more subsidence in the high peaks north-east of Kathmandu”.

The area west of Gorkha has not seen a major earthquake for more than 500 years, and a single earthquake of a magnitude of 8.5 or more could cause the crust to slip by as much as 10 metres, or more than twice as severe as April, when more than 9,000 people died.

These geological displacements are continuing, caused by the activity of the Indian plate--a raft of the earth's crust that bears the subcontinent--as it grinds into what is called the Eurasian plate, the Asian landmass.

“The April 25th earthquake, and its subsequent aftershocks, including a particularly severe one on May 12, represent part of the cycle of strain accumulation and release along this plate boundary, related to the continued northward motion of India with respect to Eurasia,” said Gavin Peter Hayes, a research geophysicist with the US Geological Survey (USGS).

The second earthquake, which pushed down some high peaks northeast of Kathmandu, occurred at the eastern edge of the Gorkha quake and along the same fault, so "stress was likely much increased by the first event", said Roland Burgmann, a professor of earth and planetary science at the University of California at Berkeley.

Combined with a historical perspective of geological forces at work under the subcontinent, there is now a better idea of the strain accumulated along the boundaries of the Indian and Eurasian plates.

The Himalayas are a source of large earthquakes along the Himalayan thrust system that bears its name; the tectonic regime is in turn responsible for shaping Earth's greatest mountains.

In other words, earthquakes are one of the processes forming mountains.

The Indian and Eurasian plates have been in conflict for 50 million years at this collision zone, with the Indian plate diving, northward, under the Eurasian plate. This is why the Himalayas, including Mount Everest--which was away from the main April earthquake area and moved by no more than a centimetre--are still growing.

Along the interface between these two plates--the main faultline--large earthquakes happen.

Scientists describe the earthquake cycle as a "stick-slip": The two plates are stuck for a long time--often centuries pass between the largest earthquakes--and then rapidly slip in earthquakes that last seconds or minutes.

Description from Caltech website: This animation illustrates the process of strain build up and release associated with megathrust earthquakes along the Himalayan front. During quiet times in between earthquakes (interseismic periods), the Indian crust is slowly pulled under the Himalayas (at about 2 cm/year=0.8 inches/year). There are places where the plates stick together (locked) and places where they don't (creeping). At locked zones, the lower plate pulls the upper plate down with it, causing the land to subside. Stress at the locked zone builds. When the stress becomes too great, the upper plate breaks free and springs back, causing the Himalayan wedge to suddenly pop up resulting in an earthquake, and aftereffects such as landslides and liquefaction of the soils in lowland areas. This "seismic cycle" recurs, although recurring earthquakes can be different and the circle duration variable. Source: Jean-Philippe Avouac, Caltech Tectonics Observatory; Tim Pyle, Caltech IPAC

Eric Kirby, an associate professor of earthquake geology and active tectonics at Oregon State University, used the analogy of a concrete block being dragged over a rough, dirt road. The heavier the block, the harder it is to move.

"If you attach a cable to the end of the block, and pull on it with a truck, the block will slide," said Kirby. "However, if the tow rope has some elasticity--that is, it can stretch--then what happens? The rope stretches for a while and the block still does not move. At some point, the strain in the tow rope is large enough that it overcomes the frictional forces under the block, and the block lurches forward."

The Gorkha earthquake was one such lurch, and scientists fear a bigger lurch is coming, potentially devastating to Himalayan countries but a common blip in geological time. 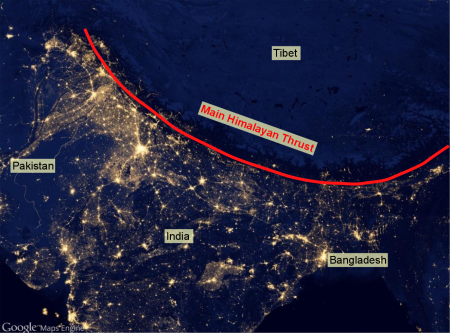 The high density of population living in the shadows of the Himalayas as shown by the nighttime lights. Source: Google Maps Engine

Why the Himalayas dive and rise

Like a thick iceberg that floats above the surface of the ocean, the Himalayas and the Tibetan plateau "float" higher than the surrounding crust, which slides atop the viscous layer beneath it, the mantle.

When an earthquake occurs, as on April 25, Standord's Klemperer explained, “the Himalayas surge forward across the Indian Plate", dropping the mountains (including Mount Everest) down.

However, as landslides and avalanches erode the top of Mount Everest, weight is taken off it, and the earth rebounds. Klemperer used an analogy: “If you stood on an iceberg and chipped 10 m of ice off the top and threw it into sea, you wouldn’t be 10 m closer to sea-level, because the iceberg would float back up.”

So, “the drop-down is not much, and Mt. Everest is in approximate equilibrium”, he said.

“In an earthquake, some of these peaks might go up and some down, but the process is such that in the long term it pushes all of them up,” said Vineet Gahalaut, Director, National Centre for Seismology, New Delhi .

As the Himalayas and southern Tibet (part of the Eurasian plate) ride over the Indian plate, every year, India converges with Asia, growing closer by about 2 cm, said Kirby of Oregon State University.

In 100 years, that translates to 2 metres, and in 1,000 years, to 20 metres. As he further explained, there is some good evidence from French geologists working on these faults that shows that the last earthquake that broke this part of the fault system happened in medieval times (1200-1400 AD). An earthquake in 1934 broke a section farther east along the fault system.

So, prior to the April 25 earthquake, Kirby said, it had been a long time since the last big rupture, long enough that 10 or more metres of convergence between India and Eurasia built up energy along the faultline.

As devastating as it was, the April 25 earthquake appears not to have released all of that energy. The fault slipped, on average, three to four metres, and it does not appear to have ruptured all the way to the end of the fault (at the foot of the Siwalik ranges), as USGS data indicates.

“Unfortunately, we are not able to say whether the rest of this accumulated energy will be released soon, or in many years," said Kirby. "Or even in decades, from now.”