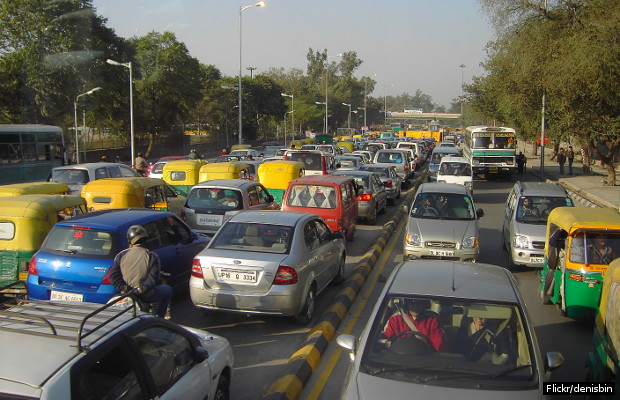 Delhi had one of its worst air-pollution days of the season on day four of the odd-even programme, indicating that the government will have to do much more to clean up the air of the world's most polluted city.

The additional measures--promised by the Aam Aadmi Party government but not yet implemented--include curbs on two-wheelers, ensuring fuel for vehicles is five times cleaner than it is now, re-routing trucks, controlling construction dust and shutting or cleaning up power plants.

Although traffic was light, all but one of IndiaSpend's 17 sensors across the National Capital Region recorded "severe", or the worst-possible level of air pollution, with some sensors registering record highs.

Monday was seen as a litmus test for the odd-even plan, with people returning to work for the first time in the new year with registration restrictions in place.

Today will be the first real test of the #OddEvenPlan so good luck Delhi. Lots of interest in what you do today.

Opinion towards the odd-even plan on social media was mixed, with some reporting positive experiences while driving because of fewer cars on the road.

Driving to office has never been such a breeze! #OddEven pic.twitter.com/vy2kATOLhb

Others complained that public transport was much more crowded than before, especially the 190-km Delhi Metro network.

Some commentators even declared the Odd-Even plan a success.

Cassandras proved wrong. On a full working day #OddEvenPlan plan is highly successful idea. Saboteurs will not give up easily?

From all that I have seen and heard, clearly this #OddEvenPlan is working. More because the citizen has awakened!

Some tried to sound a note of caution.

Why is pollution still high? Getting vehicles off road not enough

Sensor readings from #breathe, IndiaSpend's air-quality monitoring network, provide an indication of the challenges ahead.

For instance, our sensor at Connaught Place, New Delhi, at 6 PM on Monday January 4, 2016, reported an hourly Air Quality Index (AQI) of 529. This qualifies as 'severe', meaning that it could result in respiratory illnesses on prolonged exposure.

So what's behind the pollution in Delhi? Different studies put the blame on different factors, as this report in The Economic Times pointed out.

Vehicles did not figure in the top three, according to a three-year (2007-2010) study from the National Environmental Engineering Research Institute (NEERI), which said the major source of air pollution was road dust (52%), followed by industry (22%) and burning garbage (18%).

Road dust was similarly the leading cause of PM2.5 levels (38%), according to a 2013 Indian Institute of Technology (Kanpur) study submitted to the Supreme Court and quoted in this PTI report. Vehicles contributed 20% to PM2.5 pollution, while industrial sources were third with 11%.

Given the varied sources of pollution in Delhi, the AAP government will have to kickstart its other proposals. Here they are:

None of these will be easy.

Consider, shutting the Badarpur and Rajghat thermal power stations. The Badarpur plant is more than 40 years old and one of India's least efficient, according to this column in Business Standard. The government sent notices in December for the plants to be shut down but apparently they haven't yet, and they won't be shut down soon enough to have an effect during the odd-even period.

The AAP government has also made it mandatory for vehicles to meet Euro VI or the equivalent BS VI (Bharat Stage VI) emission standards by 2017, which means they must run on fuel that is five times cleaner than it is now. But union environment minister Prakash Javdekar said that might not be possible over the next two years.

Oil refineries need an upgrade to supply fuel to BS VI vehicles, which might only happen by 2020. Currently, the fuel available in major cities complies with BS IV standards, which has 50 parts per million or ppm of sulphur, as Mint reported. BS VI fuel has only 10 ppm of sulphur.

Other measures proposed include vacuum-cleaning of roads by April 1, 2016, as well as a plantation drive along roads to control dust.

The odd-even plan clearly won't be enough unless these other, less-publicised plans of the government kick in.

The 2nd real test for #OddEvenPlan to succeed will b when d school holidayseason ends.It's then when all Delhites r truly back using roads..