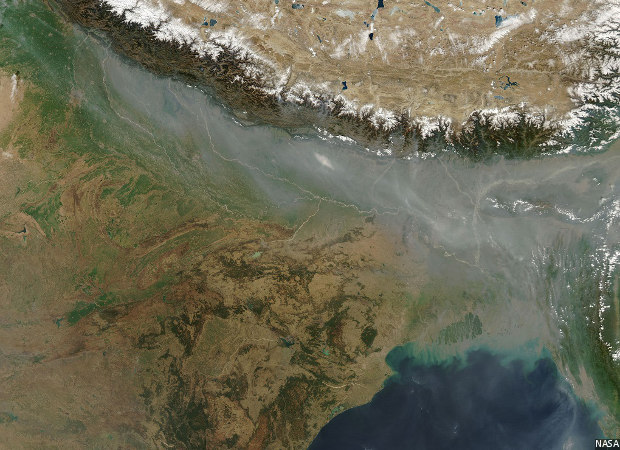 Pollutants from China and India are not only increasing in quantity but are also being pumped to greater heights in the atmosphere, thanks to the South Asian summer monsoon system, scientists have discovered.

In turn, this pollution is affecting the very pattern of the South Asian monsoon. The polluting aerosols, from the burning of fossil fuels and, to a lesser extent, biomass, also absorb heat from the sun’s radiation, further increasing global warming.

A new paper published in the journal Climate Dynamics in November 2016 concludes that aerosols have strong impacts on regional monsoon rainfall and circulation. The scientists found that the complex and steep topography of the Himalayan foothills helps in the build-up of thick layers of dust aerosols transported by monsoon winds from the Arabian deserts across the Arabian Sea. This build-up of aerosols causes the monsoon to arrive early.

These findings are important not only for climate change, but also for predicting the Asian monsoon in the future.

A team of scientists headed by William Lau from the Earth Science Interdisciplinary Center, University of Maryland, studied the unusual 2008 Indian monsoon. This year saw “exceptional heavy loading of dust aerosols over the Arabian Sea and northern-central India, near normal all-India rainfall, but excessive heavy rains and disastrous floods in the Northern Indian Himalaya Foothills, and persistent drought conditions in central and southern India”, according to the paper.

Using a NASA model, the scientists showed that the movement of polluting aerosols “plays a key role in altering the large-scale monsoon circulation system”. This led to larger differences in temperatures in the northern and southern portions of the stratosphere, a northward shift of heavy monsoon rainfall and advanced monsoon onset by one to five days.

Meanwhile, other scientists have discovered polluting aerosols now reach up to 18 km in the stratosphere—the atmospheric layer directly above the troposphere that contains most of Earth’s ozone. Findings from CALIPSO, a joint French-US satellite launched in 2006, indicate that a strange phenomenon in the atmosphere, functioning like a heat pump, drives air laden with aerosols 15-18 km high over the Himalayas, into a zone that forms a boundary between the lower and upper atmosphere layers--or the troposphere (0-16 kms) and stratosphere (16-50 km). This zone is also called the Asian Tropopause Aerosol Layer (ATAL).

The idea that hot air and pollution is pumped up over the Himalayas was first put forward in 2006 by a team also led by Lau. Lau proposed that in the pre-monsoon season, from March to May, soot from northern India and dust from the deserts of western China, Afghanistan and Pakistan gather at the foothills of the Himalayas in the Indo–Gangetic Basin. Since these aerosols absorb heat, they warm the surrounding air, making it rise vertically over the Himalayas to more than 10-15 km high, acting like an “elevated heat pump”.

The rising warm air, in turn, sucks in cooler air from the Indian Ocean, causing an earlier onset of the monsoon.

In a parallel effort, in 2009, a team led by Jean-Paul Vernier, from the NASA Langley Research Center, Virginia, also found a thick layer of aerosols between 13 and 18 km high, spanning the eastern Mediterranean Sea, northern India and western China.

In 2015, Vernier’s team found that the amount of aerosols in this layer had increased by three times since 1996, the earliest time when they appeared in satellite observations. His team--made up of Chinese, Swiss and Swedish scientists--published their findings in the Journal of Geophysical Research.

The NASA team, in collaboration with Indian scientists at the National Aeronautical Research Laboratory (NARL), Tirupati, has verified satellite data using data gathered from 30 balloons launched in India and Saudi Arabia over the last three years.

The results confirm a sharp increase of aerosols 15-18 km in the atmosphere across the Asian region in the past few years, said physicist Abhay Singh from Benaras Hindu University, who was involved in the study. “This confirms that the ATAL is likely resulting from heavy pollution over North India and Western China, for example, Sulfur Dioxide, from power plants, and can make its way to the lower stratosphere and form aerosols.”

“Large storms during the monsoon vent and lift up air from the ground to the upper atmosphere and provide a vehicle also for pollution to reach higher altitude,” said Vernier, describing preliminary findings.

“To me, monsoon storms are the main vehicle for the transport of polluted air into the upper atmosphere, and not only over the Tibetan plateau but also over North India and Western China,” he added.

Meanwhile, Lau’s more recent studies, presented at an international workshop on land-surface interactions in the Tibetan Plateau, held in China in August 2016, show the wider implications of the findings.

“Aerosols from surface pollutants not only have local effects on health and environment; and surface climate change in monsoon region, (but) may (also) have even stronger impacts on global climate change through radiation feedback processes, which are most strong and efficient in the upper troposphere and lower stratosphere,” Lau explained.

These new findings show that pollution will not only continue to change the pattern of the monsoon within and between seasons and exacerbate global warming.

Once that high, pollutants can spread globally and destroy the ozone layer that protects us from ultraviolet radiation. This, in turn, is likely to lead to skin cancers, cataracts and a suppressed immune system in humans, as well as reduced yields of crops.

And scientists are still trying to unravel the impacts of aerosols at higher levels, which they believe will impact cloud formation and weather patterns.

(TV Padma is a Delhi-based science journalist with a special interest in development-related science policies and research. This story is courtesy thethirdpole.net, a web site that tracks Asia's water crisis.)