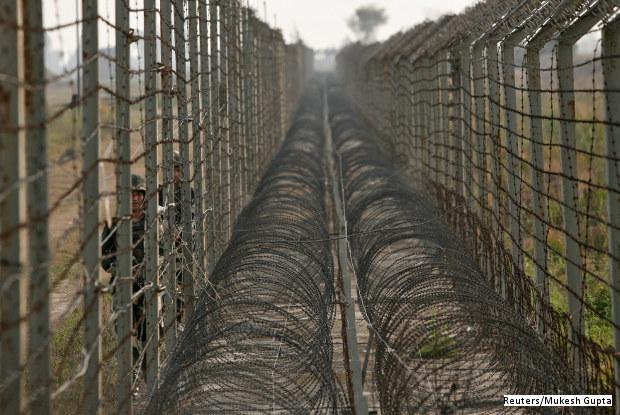 A section of the border fencing along the Line of Control in Jammu and Kashmir.

"Ceasefire violations" by Pakistan along its border with India have increased nine times from 2011 to 2014, according to data tabled in the Rajya Sabha. The ceasefire agreement it refers to was signed 12 years ago.

Pakistani Ceasefire Violations Along India-Pakistan Border (According To India)

Indian security forces have strongly retaliated, killing Pakistani security forces, terrorists and citizens. Pakistan, in turn, accuses India of similar ceasefire violations and has even filed a complaint with the United Nations Military Observers Group in India and Pakistan (UNMOGIP).

Cross-border firing by Pakistani security forces from 2011 to 2013 was concentrated along the Line of Control (LoC) that separates the part of J&K administered by India from Pakistan-Occupied Kashmir (PoK).

The trend saw a reversal in 2014; 74% of the firing was concentrated along the international border of the Indian states of Punjab, Gujarat and Rajasthan.

There were 583 ceasefire violations by Pakistan in 2014, according to data tabled in the Lok Sabha. That is an average of one incident every 15 hours, resulting in the total deaths of four army soldiers, one BSF jawan and 13 civilians in 2014.

Border Firing: The Casualties In India

Army Soldiers Killed Along The LoC

As many as 101 civilians and 33 security personnel (Army + BSF) were injured, and 128 private structures/properties suffered damage.

India accuses Pakistan of being a state sponsor of terror and that ceasefire violations by its security forces are an attempt to provide cover to terrorist incursions.

The rise in ceasefire violations indicate worsening relations, which have been particularly tense after the Modi government called off foreign-secretary-level talks with Pakistan in August 2014, in reaction to the Pakistani envoy’s meeting with Kashmiri separatists.

“Ever since the Modi government has come to power, Pakistanis have upped the ante to test India's resolve," according to veteran journalist and national security expert Nitin Gokhale. "And after the foreign secretaries talks were called off, Pakistan wants to keep the pressure on.”

To counter Pakistan’s ceasefire violations, the Indian government ordered its troops last October to retaliate by “firing at will”.

This strategy, part of a tougher foreign-policy stand taken by the Modi government, is aimed at deterring further ceasefire violations. However, some argue this is ineffective, leading instead to further escalation in tensions.

Escalation may raise fears of the possibility of war between India and Pakistan but as IndiaSpend reported earlier, mutual deterrence induced by possession of nuclear weapons and effective warhead delivery mechanisms ensures that the status quo between both countries remains in place.

“Covert operations and disproportionate response are two options which the Indian government should consider while countering Pakistan,” Gokhale said.

“Treading the middle path remains the only option for India in dealing with Pakistan as lack of engagement tends to result in border violations,” said Ramya P.S., research fellow at International Strategic and Securities Studies Programme, Bangalore.

To break the deadlock between the two countries, leaders from both sides agreed to restart bilateral talks during their meeting in Ufa, Russia.

As Gokhale warns, “don't expect much headway in the talks.” ¦