Over A Decade, 14-Fold Increase In Proportion Of Indians With Health Insurance 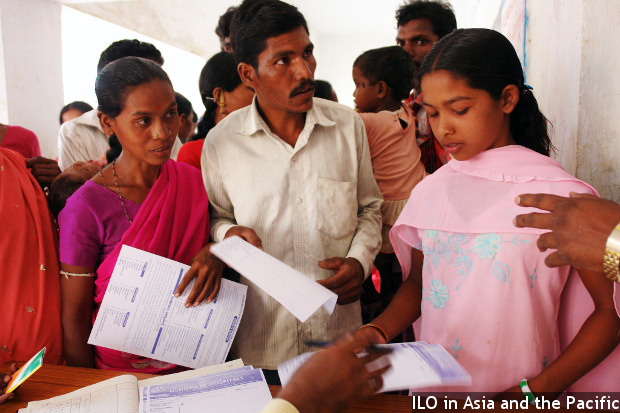 Beneficiaries enroll themselves for the Rashtriya Swasthya Bima Yojana in Andhra Pradesh. No more than 1% of India’s population had access to any form of insurance in 2004, compared to 15% in 2014.

The proportion of Indians with any form of health insurance coverage increased 14-fold between 2004 and 2014, according to a report by Brookings India, a think tank, which analysed National Sample Survey Office (NSSO) data over this period.

About 12% of the urban and 13% of the rural population got health insurance through the Rashtriya Swasthya Bima Yojana (National Health Insurance Scheme) or similar plans, IndiaSpend reported in July 2015.

With 62% of its population insured, Andhra Pradesh reported the highest coverage, followed by Kerala (39.5%) and Chhattisgarh (39.3%).

In poorer Bihar and Uttar Pradesh, 6.2% and 4.2% of populations were insured, respectively.

The World Bank had estimated that more than a quarter of 1.2 billion Indians were covered by some health insurance by 2010. The difference could be due to varying sources of data or lack of information. Many people are not aware of their coverage and how to benefit from insurance, the report noted.

India’s poorer states have health indicators that are worse than many poor nations, and India’s healthcare spending is the lowest among BRICS (Brazil, Russia, India, China, South Africa) nations, as are its health indicators, IndiaSpend reported in September 2016.

Private out-of-pocket (OOP) expenditure on health--as a percentage of India’s health expenditure (OOP+government spending)--declined by 3 percentage points, from 70% in 2004 to 67% in 2014.

Out-of-pocket expenditure is the share of expenses that patients pay to a healthcare provider without third-party insurance or government-subsidised treatment.

An in-patient is formally admitted for at least one night to a hospital.

While OOP expenses for the rural population rose 24%, the figure for urban population was 50%, which correlates with an expansion in use of public hospitals by rural women, as IndiaSpend reported in December 2016.

The poorest in rural areas witnessed an increase of 77% in OOP expenses during the period.

While this increase in OOP spending can be viewed as a “catching-up” by the poorest, it is particularly disconcerting given that all public health insurance schemes in the country target this segment of the population, the report noted.

20% rise in households which spend 1.4 times their usual expenditure on health

In 2014, 24% of Indian households were faced by catastrophic health expenses, which were higher than 1.1 times their usual consumption.

Catastrophic health expenditure is the expense of a household above a certain percentage of the usual consumption expenditure over a period.

The most worrying finding was a 20% increase in households with catastrophic expenses of over 1.4 times (or 40% higher than) their usual consumption expenditure. Within this segment, urban households witnessed a rise of 44%; rural households by 14%.

7% of Indian households below poverty line due to health expenditures

The percentage of Indian households that fell below the poverty line due to out-of-pocket health expenditures has remained largely unchanged at approximately 7% over the last 10 years.

Inadequate public healthcare and healthcare expenses push an additional 39 million people back into poverty in India every year, this 2011 Lancet paper said.