Over 15 Years, India Slides On Key Marker Of Gender Parity

Twenty one years ago when Poonam Gaur was a young bride, her in-laws in Bas Padamka in Haryana disallowed her from studying further or working. Today, she is part of a group of women who help disadvantaged, illiterate women understand the message behind Beti Bachao, Beti Padhao, the government’s awareness campaign aimed at gender sensitisation. While Indian women now have much better access to education, they have a long way to go in terms of achieving real freedoms--participating in decision-making in political, economic and public life, having control over their own bodies, and having the right to choose when and who they marry.

Mount Abu, Rajasthan: Poonam Gaur was a 21-year-old bride when she sought permission from her in-laws to complete her graduation and work. She had applied for a clerical job in the government and had been called for an interview in Delhi, her hometown.

Her new family in Bas Padamka, in Pataudi tehsil, Haryana, would hear nothing of it. “Women in Bas Padamka were expected to depend on men for everything,” Gaur, now 43, told IndiaSpend. “We weren’t allowed to set foot outside the house. I was somewhat educated and wanted to move ahead but unaware of how to fend for myself and too cowed down to fight (even) for my daughter’s rights.”

Gaur’s story was common enough two decades ago. But large-scale government campaigns to achieve gender parity in education have resulted in changes that brought India closer to the United Nations Millennium Development Goal for 2015 on gender equality. Today, girls in India are almost as likely as​ boys to attend secondary and senior secondary school and college.

But in 2015, these UN targets gave way to its Sustainable Development Goals which sought greater equities for women. The new goals formalised two parameters that were earlier only being tracked--women’s participation in the workforce and the number of women members of parliament in a country.

The sustainable development goal on gender equality also spells out other pro-women targets, such as universalising access to sexual and reproductive health and reproductive rights--which based on the maternal mortality rate, currently still vary significantly across India typically with women in the south being better off. It also aims at eliminating all forms of violence against women and girls in the public and private spheres: Violence against women rose 83% in India in the last decade, as per this December 2017 IndiaSpend report.

So while Indian women now have much better access to education, they have a long way to go in terms of achieving real freedoms--participating in decision-making in political, economic and public life, having control over their own bodies, and having the right to choose when and who they marry.

Gaur’s life finally turned 13 years ago when she came in contact with the social workers at Deepalaya, an NGO working for less privileged people. The group taught her to assert herself, something that formulaic education had not.

“Deepalaya taught me and 15 other women forming a self help group how to save, the basics of banking and empowered me to start a small business,” she said. 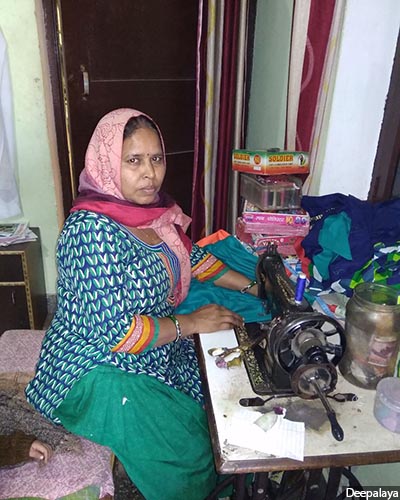 Gaur’s life finally turned 13 years ago when she came in contact with the social workers at Deepalaya, an NGO working for the underprivileged. “Deepalaya taught me and 15 other women forming a self help group how to save, the basics of banking and empowered me to start a small business,” she said.

Today, Gaur is part of a group of women who help disadvantaged, illiterate women in Pataudi understand the message behind Beti Bachao, Beti Padhao (save daughter, educate daughter), the government’s awareness campaign aimed at gender sensitisation.

Equal opportunities for leadership in economic life and equal rights to economic resources--these two targets under the sustainable goal on gender parity are relevant in India, where patriarchy, cultural and social attitudes continue to keep women indoors.

Women made up 27.2% of India’s workforce in 2011. In south Asia, this is the lowest rate of female employment after Pakistan. Among G-20 countries, only Saudi Arabia is worse, IndiaSpend reported on April 9, 2016. Globally, women constituted 41% ​of the paid workforce outside of agriculture in 2015.

If the number of women who quit jobs in India between 2004-05 and 2011-12 (the last year for which census data are available) was a city, it would, at 19.6 million, be the third-most populated in the world, after Shanghai and Beijing, IndiaSpend reported in its ongoing nationwide investigation on women and work.

The reasons why women are keeping off the workforce in India are largely social and cultural, the series had found. Family and responsibility for household work were found to be the biggest constraints.

The responsibility for household chores rests largely on women but this work is neither recognised nor valued. Until women get support by way of public services, infrastructure, social protection policies or just the promise of responsibility sharing, both of which are targets of the Sustainable Development Goal on gender equality, they are unlikely to join the workforce in larger numbers.

There is a problem with higher education as well. Almost half of India’s girls did not make it to the senior secondary level in 2015-16, and three in four young women received no higher education.

Women in India hold only 11.8% of seats in the Lok Sabha (lower house of Parliament) as against the 50% target of the UN’s sustainable development goal on gender equality and the current 23.5% world average.

Women fare better in neighbouring Nepal with 29.6%​ of parliament seats, in Pakistan with 20.6%​ and in Bangladesh with ​20.3%​. This is despite the fact that these countries have Gender Inequality Indices comparable with India’s 0.53​. (The scale measures 0 to 1, where 0 represents gender parity and 1 represents gender inequality in every sphere of life.)

A clue to how India can improve on female representation in parliament lies in the three countries with the most female parliamentarians—Rwanda (61.3%​), Bolivia (53.1%​) and South Africa (​41.8%​).

Affirmative action has been a key driver of female representation in parliament in all these three countries, and also, in 39% countries globally. Rwanda and South Africa both have laws stipulating that a certain percentage of seats--30% and 50%, respectively--be held by women while Bolivia has legislation requiring equal numbers of male and female candidates in elections.

India introduced the Women's Reservation Bill to reserve 33% of all seats in Lok Sabha, and in all state legislative assemblies, in 1996. In 2010, the Bill was passed in the Rajya Sabha (upper house of the parliament) but not brought to vote in the lower house due to strong opposition from lawmakers, especially those from backward classes who argue that such a bill would favour women from upper castes, who are better educated and more resourceful--a weak argument considering that even women from upper castes have not made it to the parliament in sufficient numbers.

IndiaSpend reported in January 2018 on five laws that Indian women need as urgently as the ban on instant triple talaq. The Women’s Reservation Bill is an older and equally pressing piece of legislation for the empowerment of women across India.

Women’s health, a measure of gender parity, is still not a priority

Improving public health facilities to universalise access to sexual and reproductive health is critical for achieving any women’s empowerment target. Inadequate public-health infrastructure and sometimes, the apathy of the service providers (see this August 2015 investigation by IndiaSpend and Video Volunteers), push pregnant women to seek private treatment, which the poor can ill afford.

This medical care deprivation, in turn, affects the maternal mortality rate, a leading indicator of the gender inequality index. Good quality free or low-cost healthcare would also positively impact the child sex ratio by giving the baby girls a better chance at life.

Indian baby girls have a significantly lower chance than baby boys of living till age four, and this prospect has diminished in these last few decades. Whereas 56​ boys died for every 100 girls aged 0 to 4 who succumbed to childhood diseases in the 2000s, the corresponding figure was 75​ male deaths for every 100 female deaths of the same age group in the 1970s.

So far, the Indian government action on the Sustainable Development Goal on gender equality and women’s empowerment has focused on the Beti Bachao, Beti Padhao campaign.

It was first launched in districts where the patriarchal mindset is the strongest and is reflected in a low child sex ratio.

All the northern states logged a child sex ratio less than the national average, 914, the lowest since 1951, in the 2011 census. At the district level, roughly 80% of the 100 districts with the lowest child sex ratio lie in north and northwest India.

“While Beti Bachao, Beti Padhao is a national level awareness campaign, in the first phase, it was implemented in 161 districts with the lowest child sex ratio where women also need to be empowered,” Jupaka Madhavi, a gender expert and consultant with the government, told IndiaSpend.

Early results show that Beti Bachao, Beti Padhao has helped improve the sex ratio at birth in 104 of the 161 districts, prompting the government to take the scheme to the rest of the country.

But the campaign would do well to widen its focus. Without affirmative action to draw more women into politics and a concentrated effort to get them into the workforce, India may struggle to meet the UN targets.