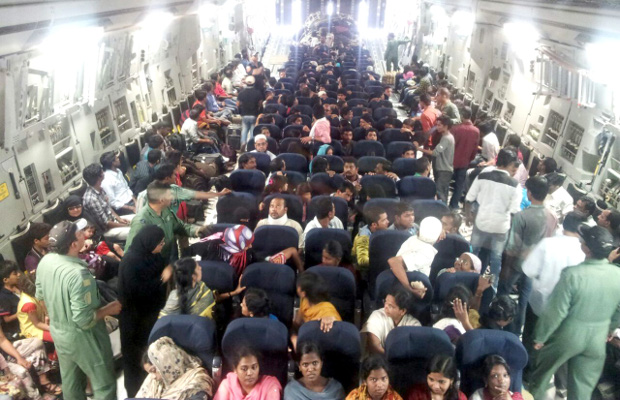 The youngest evacuee is a 6-day old baby named Parvati, who was flown to Kochi by plane while still in an incubator, battling jaundice and severe respiratory problems.

The operation, which began on 31stMarch, 2015, was a collaborative effort between the Ministry of External Affairs, Indian Navy, Air Force and the national airline, Air India.

The evacuations began with the rescue of 349 Indian nationals from the Yemeni port of Aden by INS Sumitra, an offshore patrol vessel of the Indian Navy.

Air rescues were carried out by 18 special Air India flights landing directly in the airport at the Yemeni capital of Sanaa between April 3 and April 9; 2,900 Indians were evacuated, including nearly 140 Indian nurses, last to be evacuated from Sanaa, Yemen’s capital.

These evacuees were taken from various parts of Yemen to Djibouti, in the Horn of Africa, from where they were sent back to India by special Air India flights or Indian Air Force heavy-lift C-17 Globemaster III transport aircraft.

Operation Raahat was led by General VK Singh (retd.), minister of state for external affairs and former army chief, who was deputed to Sanaa and Djibouti by Prime Minister Narendra Modi.

Youngest evacuee fromYemen. 3 day baby in incubator along with an accompanying Doctor on AI flight to Kochi. pic.twitter.com/2dlrrVJXCY

The evacuations became necessary following increasing violence in Yemen between forces loyal to beleaguered President Abdrabbuh Mansour Hadi and those allied to Zaidi Shia rebels known as Houthis, according to BBC.

More than 100,000 people fled their homes due to the fighting and hospitals have been overwhelmed by mass casualties, according to UNICEF.

A history of Indian evacuations from West Asia

Operation Raahat is not the first time India has evacuated its citizens from a crisis situation in the Middle East.

In 1990, India evacuated 111,711 citizens from Iraq and Kuwait through 488 Air India and Indian Airlines flights over a 59-day period, creating a world record for the largest aerial evacuation since the Berlin airlift in 1948-49.

The evacuation was carried out ahead of US military intervention in the Persian Gulf.

The expertise gained by India led to 26 countries requesting assistance in rescuing their citizens from Yemen. Those countries included the US, UK, Germany, France and neighbours Bangladesh and Sri Lanka.

The US State Department, on April 6, 2015, issued a travel advisory asking its citizens to contact Indian embassy officials in Sanaa for evacuation assistance by air and sea.

“This is significant considering the fact that the US has strong naval presence as well as deployment of its air force in West Asia,” said a report in the Economic Times.

Nearly one in six persons (960 out of total 5600) rescued by India during Operation Raahat is a foreign national; those rescued are from 41 different countries, including three Pakistani citizens, leading to rare cooperation between hostile neighbours.

Pakistan also rescued 11 Indian nationals from Yemen's south-eastern city of Mokallah. They were subsequently sent to India in a special plane, prompting the following tweet by PM Narendra Modi:

I welcome our 11 citizens who've returned from Yemen with assistance from Pakistan. Thank you PM Nawaz Sharif for your humanitarian gesture.