With 40% Indians defecating in the open in 2015, India was ranked 210 among the 232 countries/regions, according to the 2017 report of the joint monitoring programme for water supply, sanitation and hygiene produced by the World Health Organization (WHO) and United Nations Children’s Fund (UNICEF). The global average was 12%.

In S Asia - comprising Maldives, Bhutan, Bangladesh, Sri Lanka, Pakistan, Nepal, India and Afghanistan - India was the worst among the eight nations in 2015.

No more than 44% Indian households had access to ‘basic sanitation’--defined as ‘improved facilities’ not shared by other households-- in 2015, and was ranked 191 among 232 countries/regions, the report said. The global average was 68%.

In South Asia, India was ranked seventh among eight countries in 2015 in providing access to ‘basic sanitation’.

As many as 12% Indians shared ‘improved’ sanitation facilities with two or more households in 2015, said the report. The global average was 8%. In S Asia, India was ranked sixth.

With 4% Indians still using ‘unimproved facilities’ in 2015, the country was ranked 130 in the world, according to the report. The global average was 12%. In S Asia, India was ranked third after Sri Lanka (0%) and Maldives (2%).

The report, published on July 12, 2017, evaluated 232 countries/regions globally based on the percentage of population that used shared or independent sanitation facilities. 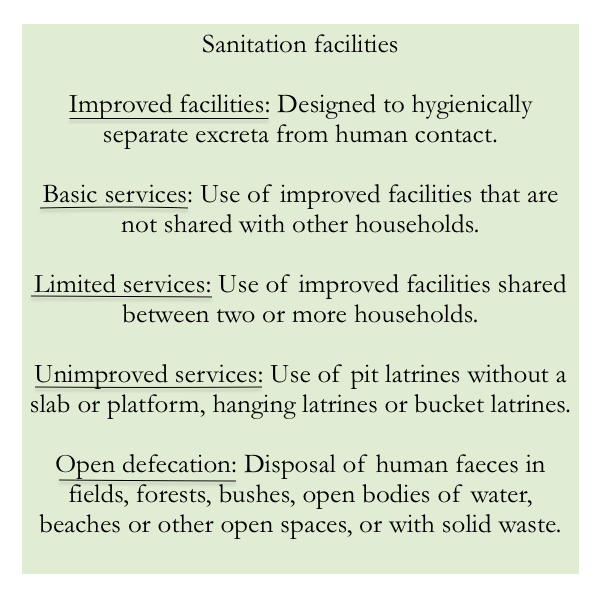