Mumbai: Of all the states and union territories in India, only the district courts in Delhi and Chandigarh fulfill the infrastructure guidelines set by the National Court Management Systems (NCMS) Committee in 2012, according to a new report by the Vidhi Centre for Legal Policy, a think-tank.

Most of the district courts elsewhere are not accessible for persons with disabilities, and 60% of them do not have a fully functional washroom, the reports said.

The 2012 NCMS guidelines had set out a detailed plan for court infrastructure with an aim to tackle the high number of pending cases. “One of the most important factors contributing to the mounting arrears is the lack of an adequate number of judges and the requisite infrastructure,” the introduction to the guidelines said.

At 258,965 pending cases, district and other subordinate courts make up for 64.37% of the total pending cases in the country, minister of law and justice told Lok Sabha on July 19, 2019.

The lower judiciary is the first point of contact for most litigants, and the study examined access from litigants’ perspective by assessing 665 district courts across India and interviewing 6,650 litigants.

Most District Courts Not Accessible For Persons With Disabilities 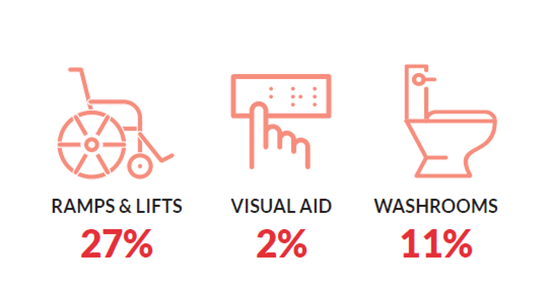 Only the district court in Chandigarh passed the test for all these three features. None of the other states could manage a 50% score. Of a total of 100 points, the union territories of Lakshadweep and Delhi scored 67 and 55, respectively.

As many as 585 of the 665 courts (88%) had a washroom but only 40% had fully functional ones. A fully functional washroom was defined as one that has running water, a provision for regular cleaning and is gender-segregated. None of the washrooms in Goa’s courts had running water or were regularly cleaned, giving it the lowest rank for hygiene.

When asked how the quality of washrooms could be improved, litigants emphasised the need for running water and flush facility.

Some 89% of the district courts in India do not have a baggage scanning facility; 71% do have a fire extinguisher and 52% do not have emergency exit signs. 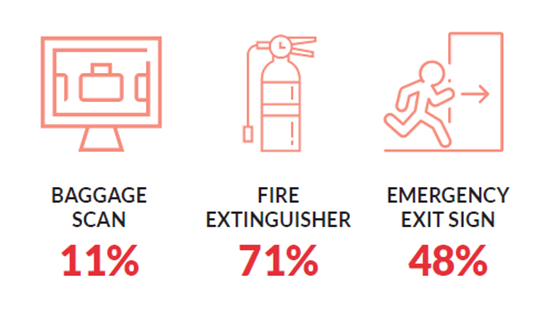 The major improvements that the litigants said the waiting rooms needed were: more seating (69%), better ventilation (37%) and higher levels of cleanliness (26%).

Getting there and navigation

Most of the courts assessed were accessible through public transport (80%) and had parking space (81%). Andhra Pradesh, Goa and Kerala ranked the highest and Gujarat, Sikkim and Tripura ranked the lowest in terms of accessibility to district courts.

Only 20% of the courts had guide maps and 45% had help desks. Most of the litigants (59%) asked lawyers for directions within the court premises.