Only 1 Of 27 Indian Sports Bodies Has Athlete As President 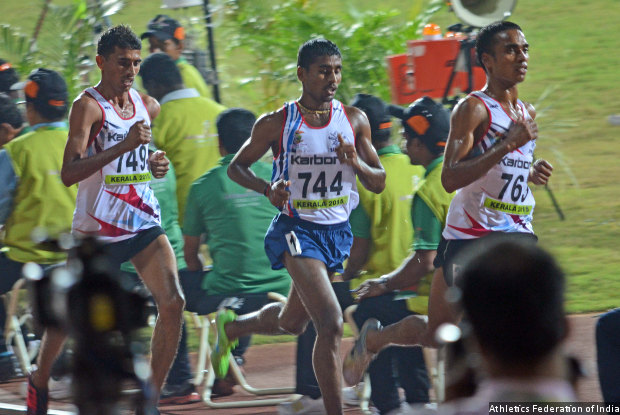 Athletes take part in the 35th National Games held in Kerala in 2015. The Athletics Federation of India is the only sports association among 27 studied to have a former national athlete as president.

Indian marathon runner O P Jaisha said she fainted at the Rio Olympics on a hot, humid day because no Indian sports official provided her with water or glucose water, a reminder that sports federations in India are often ignorant of sporting requirements.

Much has been written about Indian sports associations managed by politicians instead of athletes. Now, there is clear data on the details:

These are the key findings of a new report, Governance of Sports in India: 2016, by InGovern Research Services, an advisory, which analysed publicly available data from 27 sports associations and federations (including the Indian Olympic Association). The IOA’s members include 38 national sports federations (NSFs).

Of these 38 NSFs, sports and disciplines represented by 26 NSFs--which the report probes--featured in the recently concluded Rio 2016 Olympic Games. The major findings are segregated into five major buckets:

1. Incorporation and constitution of associations and federations

2. Composition of associations and federations

Most SAs and NSFs have an income of less than Rs 100 crore, the report noted, while the Board of Control for Cricket in India (BCCI) earned Rs 1,266 crores in the financial year 2015-16.

Source: Governance of Sports in India, 2016

5. Management of Conflicts of Interest

The report outlines six major recommendations that could improve governance of sports in India:

i. Design a strategy/road-map for future: The IOA and all SAs should adopt a strategic roadmap that is disclosed to the public domain. Implementation of this roadmap should be monitored and disclosed regularly.

ii. Revamp of elections and succession planning: The SAs should amend their constitutions to set: Maximum term limits and retirement limits for members and office bearers (such as president, secretary, treasurer). Once they reach the limit, they should not be considered for future appointments.

iii. Be transparent: SAs should put their financial statements, profiles of executive council and administrative staff, budgets, expenses and remuneration details in the public domain.

v. Increase player- and female-representation on the council: This is important to enhance diversity on councils.

vi. IOA should be more transparent: The IOA must disclose its budgets and audited financial statements of its participation in any national and international events. For these events, it should disclose participating sportspersons, non-playing staff, including officials and doctors and a break-up of expenses.