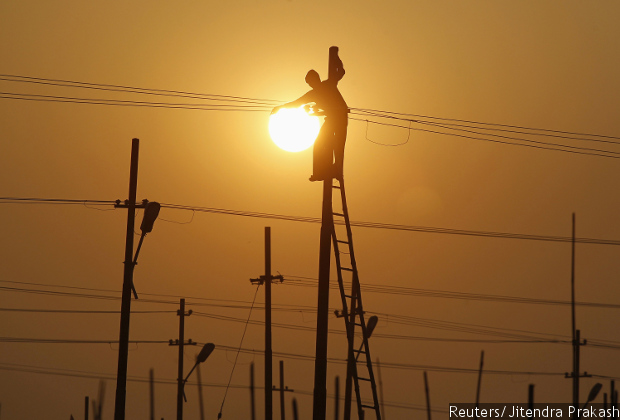 A worker is silhouetted against the setting sun while installing an overhead electric cable pole in Allahabad, Uttar Pradesh. About 28% of the voters interviewed for a survey said power cuts were the biggest issue in the state, while 20% said jobs, the economy and development were the biggest issues.

Almost a third of voters polled said power cuts were the biggest problem in Uttar Pradesh (UP), according to a new survey conducted by by FourthLion Technologies, a data analytics and public opinion polling firm, for IndiaSpend.

Elections in UP, with 138 million voters, greater than the population of the north American country of Mexico, start February 11, 2017.

The next part of this series, based on the survey, addresses political preferences of voters.

The Most Important Problem Facing UP
Create your own infographics

By the end of 2016, in rural UP, 17.7 million rural households were unelectrified, down from 18.6 million households in March 2014, government data show.

“Power cuts are a more tangible issue,” and so voters might identify it as being a big problem compared to health or education, the quality of which is a more abstract issue, said Neelanjan Sircar, a senior fellow at the Centre for Policy Research, a New Delhi-based policy think tank.

The other big issue: jobs

Of the voters surveyed, 20% said that availability of jobs was the most important issue in UP.

Even those with a graduate degree face unemployment, pointing both at the lack of jobs and the poor quality of education in the state. For instance, in India, while 97% wanted jobs, either in software or core engineering, only 3% were good enough to be engineers in software jobs, and only 7% could handle core engineering tasks, as IndiaSpend reported in September 2014, based on a report by Aspiring Minds, a New-Delhi based employment consultancy.

As many as 237 per 1,000 working age people (between the ages of 18 and 29 years) with graduate qualifications were unemployed in UP, according to labour ministry data from 2015-16.

What did voters say about environmental issues?

As many as 46% of urban voters surveyed thought the air they breathe was polluted compared to 26% of voters in rural areas. Kanpur, Firozabad, Allahabad, and Lucknow in UP are included in the world’s 25 most toxic towns, according to data between 2008 and 2015 from the World Health Organization.

A high percentage of voters said they would use public transport and solar energy, the survey found.

Low income voters were more likely to use solar energy and public transport than more affluent voters, survey data show, even though fewer low income voters (26%) said the air they breathe was polluted compared to richer voters (36%). As many as 90% of voters who owned no vehicle said they would use electricity generated from the sun if it reduced pollution in their community, compared to 73% of those voters who owned a car.

Similarly, 96% of those who did not own any vehicle said they would use public transport if better facilities were available, compared to 87% of those who owned a car. 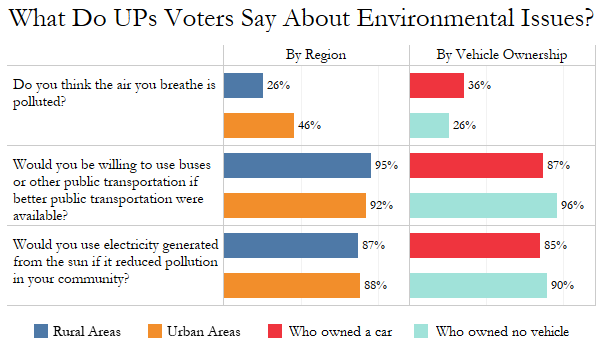 Sanjukta Nair contributed to this story.

Next: As Many As 40% of Uttar Pradesh Voters Undecided With 5 Days To Go

The story has been updated to reflect the correct number of unelectrified households in Uttar Pradesh, from 177,000 to 17.7 million. We regret the error.