A group of villagers in central Bihar’s Begusarai district, including an elderly man, are seen holding their ears and doing sit-ups surrounded by policemen and government staff in this video posted by a local news channel in October 2018. They were being ‘punished’ for defecating in the open, the channel reported. The video also shows the villagers being made to repeat that they will defecate only in latrines. A government official can be seen slapping one of the men for smiling during the repetition.

A woman in Ahmednagar district, near Pune in west Maharashtra, is seen being dragged by two women, one wearing an Anganwadi workers’ uniform, from fields where she appears to have gone to defecate, in this video published by a local studio in August 2017. The women drag her up to the road and push her into a jeep where some men are seen waiting, even as she screams in protest and begs for forgiveness.

A 12-year-old boy in Kaushambi in south-east Uttar Pradesh died after he was allegedly beaten for defecating in the open, according to this video published by news channel ETV Bharat.

Similar news videos from Haryana, Madhya Pradesh and Uttar Pradesh show instances of people found defecating in the open being humiliated, fined, arrested and even beaten up, in name of achieving the Swachh Bharat Mission (SBM) goal of making India open defecation free (ODF) by October 2, 2019, five years after the SBM was inaugurated by Prime Minister Narendra Modi. One news report from January 2017 found posters in Madhya Pradesh threatening death for open defecation.

About 56% of people surveyed in rural Madhya Pradesh, Rajasthan, Bihar and Uttar Pradesh by research advocacy group Research Institute For Compassionate Economics (RICE) reported being aware of at least one of three coercive practices—being stopped from open defecation, threats of withholding government benefits and threats of fines—deployed by government staff or members of community vigilance groups, if they failed to build latrines or continued with open defecation. On January 4, 2019, RICE and think tank Accountability Initiative (AI) published a working paper based on the findings of this survey and an earlier AI study. IndiaSpend reported the findings of the working paper on January 7, 2019, which also found that 44% of people in the four states defecated in the open in 2018, compared to 70% in 2014.

We also reported that 23% of latrine owners still defecated in the open--similar levels as 2014--mostly due to social beliefs about caste purity and pollution, according to the paper, and that among latrine owners who continue to defecate in the open, Dalit households were twice as likely and Adivasi households thrice as likely to face coercion, compared to other groups.

The ministry of drinking water and sanitation (MDWS), which oversees SBM, on January 9 responded to IndiaSpend’s report and also issued a press release saying SBM supports positive behaviour change and takes reports of any coercion in implementation seriously. The MDWS also said that the “[RICE and AI] report fails to distinguish between coercion and affirmative community action, like local Nigrani Samitis [village vigilance committees comprising villagers who volunteer to monitor open defecation], or local gram panchayat or community level sanctions on open defecation.”

IndiaSpend asked Nikhil Srivastav, director of research and sanitation at RICE, a graduate student of the Lyndon B Johnson School of Public Affairs, University of Texas, and one of the co-authors of the paper, if RICE agrees with the MDWS’ claims about coercion, why Indians continue to defecate in the open and why most Indians prefer large single pit latrines. Excerpts from the interview:

After the launch of RICE and AI’s working paper, some people asked why not talk about the improvements in reducing open defecation achieved by Swachh Bharat Mission post-2014, rather than about people who still practice open defecation. Your comment?

Our study finds that there is a 26% reduction in open defecation in rural Uttar Pradesh, Bihar, Rajasthan and Madhya Pradesh, but 44% of rural residents in these states continue to defecate in the open. These are the facts.

We are also concerned about what happens after a region is declared open defecation free (ODF). Good examples of this are Madhya Pradesh and Rajasthan [by October 2, 2018, 25 states and union territories had declared themselves ODF, IndiaSpend reported, but SBM claims and data were questionable]. These states have been declared ODF, and now they lack resources for tackling open defecation where it is still going on. By talking about open defecation continuing in these ‘ODF’ regions, we want people to focus on the problem. Unless everyone accepts that the task is incomplete, we cannot hope the government will continue working on convincing rural Indians to use latrines.

Do you think that the challenges to achieving sanitation goals associated with social beliefs around caste and purity have reduced?

India, even before the SBM was launched, was seeing a decrease in open defecation at a rate of 1% per annum. Now, under the SBM, the rate is a little over 6% per annum. Some people switched to using latrines because they wanted to; others switched because they were coerced to. Our data shows that large [single] pit latrines remain more likely to be used, and small pit [including twin pit] latrines continue to be looked down upon. Rural Indians still worry about emptying pits, which they associate with manual scavenging, and thus continue to be averse to using smaller latrines like twin-pits, though these are inexpensive. People want large pits that don’t have to be emptied for generations. They want a 10x10x10 feet pit [1,000 cubic feet capacity].

Ideal volume of latrine pits in rural narratives vs volume of WHO- and Indian government-recommended pits, 2016 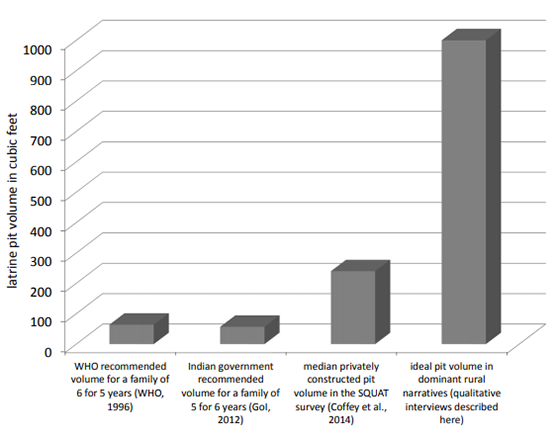 The ministry of drinking water and sanitation, responding to our report on the working paper’s findings, said researchers failed to distinguish between coercion and affirmative community action. So they don’t consider actions like we have seen in many videos--of people being humiliated, punished and beaten up for defecating in the open--coercive?

There are publicly available videos on the internet that show some of the worst instances of coercion--poor villagers being beaten up by government officials, a woman being dragged out of fields by government workers, etc. Also, every now and then reports covering such coercive activities in rural areas surface in the national media. Local media covers these instances more frequently. Photos abound of government buildings bearing threatening messages that households without toilets will be fined and lose government benefits. One such poster, published by Dainik Bhaskar [a national Hindi newspaper], said “Shasan ke aadesh anusaar: [toilet na banane par] 500 rupay ka jurmana aur ration bhi nahi diya jayega aur sarkari suvidha se vanchit kiya jayega” [By government orders: Rs 500 fine, ration and government services will be withdrawn for not building toilets].

One out of every four households we surveyed told us that they had heard of threats to withhold government benefits like rations in their village. In India, people have a right to benefits like food.

There are two broader problems with such sanctions and coercive activities: one that many rural households depend on government rations and pensions, and taking these away means starvation for some families. The other is that such sanctions often reinforce the existing caste hierarchy in villages. A block level official, while explaining the process of forming Nigrani Samitis, told us that samiti members usually include the sarpanch, the MLA, a ward member and other respected people who the villagers listen to or even fear, such as lambardars [powerful zamindars]. The official said those are the people they ask for help in persuading villagers. 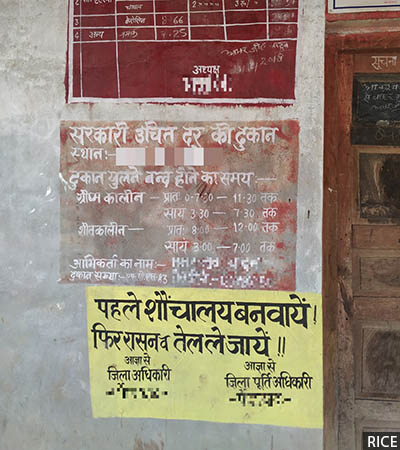 ‘First build a latrine, then get ration and kerosene’ says a message issued by a district administration, painted on the wall of a government ration shop in Uttar Pradesh.

Of the 23% people who own a latrine but continue to defecate in the open, do you know how many of them had to build their own latrines and how many of these were twin-pits? Are they continuing to defecate outside because they are not happy with their twin-pit latrines?

People with twin-pit latrines are more likely to defecate in the open than people with large, single pit latrines that are normally emptied mechanically. Many people believe that a twin-pit latrine will fill up in a year or less, and are disgusted by the prospect of emptying it manually, even after the faeces has decomposed. I remember talking to a woman in MP. She was talking about a television advertisement [promoting twin-pit latrines issued by the SBM-Rural] featuring [Bollywood actor] Akshay Kumar, where he says that the faecal sludge becomes son khad [fertiliser]. She looked at me and said, “Unhe karna hai to karne do, humse nahi hoga” (let them empty the pit if they want, I can’t do it].

The kind of social ostracisation that Dalits [scheduled castes], especially Valmikis [a Dalit community who form the majority of manual scavengers who empty latrine pits] face is inhuman. “Hookah-pani band hoga” is one phrase we heard over and over again. It means that people will face similar ostracisation and social repercussions if they empty the pits themselves.

So people underestimate the time it will take to fill a twin-pit latrine?

Accountability Initiative’s own study showed that 61% of people underestimate the time it will take for their latrine pits to fill. The World Health Organisation says that a pit of 50 cubic feet will take around five years for a family of five members to fill. The government is pushing twin-pit latrines under the SBM, that add up to about that much volume, but what people really want is an even larger pit.

Remember when the MDWS secretary emptied latrine pits? Those are the kind of actions that should happen. I hope one day the prime minister will set an example by emptying a latrine pit, and show that there is no shame in doing so. Everyone can and should do it.