Ahmedabad: “We don’t know when this misery will end.” It was two weeks since brothers and college dropouts Rajendra (33) and Devendra Chunara (34) had found work. Their slouched shoulders, tired eyes and worried faces betrayed their frustration.

Every day at 8 am, they stand with about 2,000 daily wage workers -- either in groups on the side of the road or, when they tire, sitting on the divider -- hoping to be hired for construction sites, loading, plumbing, electrical, anything.

At the Akhbar Nagar circle -- one of the largest of about 50 labour hubs in India’s 5th most populous city in its 13th-richest state by per capita income -- they wait for labour contractors to offer them a job or swarm any vehicles that slow down. About half are locals, the rest from poorer states such as Uttar Pradesh, Bihar and Rajasthan, the workers told IndiaSpend. 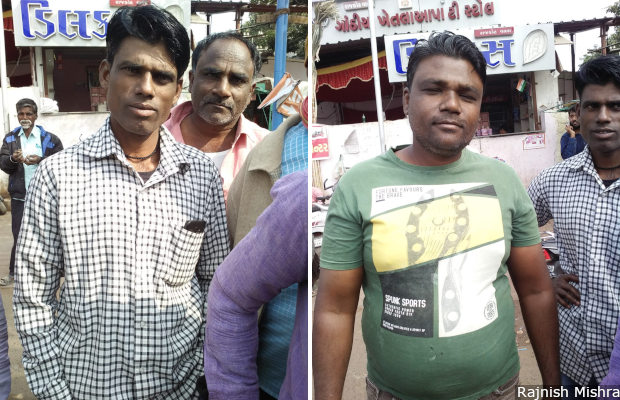 Before Prime Minister Narendra Modi’s demonetisation programme invalidated 86% of India’s currency overnight in November 2016, the Chunara brothers each earned double of what they do now: from Rs 10,000-Rs 15,000 each, their monthly income is now Rs 3,000-Rs 5,000 per month each. Before demonetisation, the brothers worked 25 days a month. Now, they work for five to 10 days. Other workers around the brothers confirmed these data.

As Nobel laureate Paul Krugman warned India of mass unemployment, and a leaked government report revealed that the male workforce shrank by 18 million over six years to 2018, the brothers said they were living through their “worst time” in 10 years, and had never seen so much unemployment.

The “main reason” for the lack of jobs for labourers was demonetisation, which “severely impacted” Gujarat’s largely cash-driven construction sector, the second-largest contributor to its economy at 10%, behind only agriculture (22%), said Ashish Patel, chairperson of the Gujarat Institute of Housing and Estate Developers, a not-for-profit body of realtors.

This is the fourth of an 11-part series (you can read the first part here, second part here, and the third part here), reported from nationwide labour hubs--places where unskilled and semi-skilled workers gather to seek daily-wage or contract jobs--to track employment in India’s informal sector. This sector, which absorbs the country’s mass of illiterate, semi-educated and qualified-but-jobless people, employs 92% of India’s workforce, according to a 2016 International Labour Organization study that used government data.

By delving into the lives and hopes of informal workers, this series provides a reported perspective to ongoing national controversies over job losses after demonetisation and a transition to the Goods and Services Tax (GST) regime. The number of jobs declined by a third over four years to 2018, according to a survey by the All India Manufacturers’ Organisation, which polled 34,700 of its 300,000 member-units. In 2018 alone, 11 million jobs were lost, mostly in the unorganised rural sector, according to data from the Centre for Monitoring Indian Economy (CMIE), a consultancy.

No official comment was forthcoming, but the state government does not accept that demonetisation either affected Gujarat’s economy or shrank the job market, a labour department official said on condition of anonymity, given the sensitivity of the subject. As a consequence, there is no specific support for jobless workers.

In the prime of working lives, without work

Hard times first visited the Chunara family a decade ago, when a family financial crisis--caused by the failure of their father’s little farm--forced Rajendra to drop out of second-year electrical engineering and Devendra from second-year B. Com and join Gujarat’s informal labour force.

Their wives do not have jobs, their children attend primary school, and they live in rented houses in Vaddaj, a short walk from the bustling market square, situated between two busy roads.

Almost 70% of workers in Gujarat’s informal sector are below 40 years of age, said Ramesh Shrivastav, secretary of Mazdoor Adhikar Manch, an NGO working for the rights of labourers in construction and other unorganised sectors.

Struggling to pay for basic amenities such as rent and school tuition, the Chunara brothers said “more than 70%” of their fellow daily-wage labourers were forced to take loans from moneylenders who charge “hefty” interest, ranging from 10% to 20% per month.

We found similar experiences voiced by daily-wage workers waiting at labour hubs across the city in Ghatlodia, Sabarmati, Chandlodiya, Shahpur, Narol, Nehru Nagar, Sarkhej, Vasna and Memnagar. Most blamed demonetisation on the current state of unemployment in Gujarat’s unorganised sector. While there is not as much work as before, there are more who wait for jobs, they said.

The government does not even try to find out how many look for temporary jobs.

“The workforce in the unorganised sector is so huge, it is not possible to get the numbers tabulated through any survey,” said deputy labour commissioner Shrutiben Modi. “The government is trying to get more and more of them registered under various boards and welfare schemes.” She said an estimated 83% of the state’s workforce is in the unorganised sector, nine percentage points lesser than the national average.

The number of daily-wage workers waiting daily across all the major labour hubs in this industrial city is around 100,000, said Minaben Jadav of the Centre for Labour Research and Action, an NGO working for labour rights in Gujarat.

Skilled and semi-skilled labourers earn around Rs 800 per day, while the unskilled--the largest section of the crowd at Akhbar Nagar circle--said they were lucky if they got Rs 400 a day; it was usually half that amount.

After waiting the entire day at Akhbar Nagar circle, Rajendra and Devendra found no work. Defeated, they packed up their tiffin boxes and headed home -- in the prime of their working lives, with no work and no prospect of improvement.

‘Life has become even more difficult’

Gujarat’s construction sector was seeing a “slump due to economic slowdown” before demonetisation, and it “virtually stopped [working]” post the note-ban, which has led to unemployment and labour loss, said Balbir Singh Khalsa, the Ahmedabad branch manager of Knight Frank LLP, a global property consultancy.

The arrival of the Real Estate Regulation and Development (RERA) Act in 2016 and the GST in June 2017, widely criticised for its hasty, often chaotic implementation, further “hit the market”, Khalsa said.

This slowdown has made the lives of construction workers at the bottom of the labour pyramid especially hard.

At Akhbar Nagar circle, illiterate construction labourer Rajesh Parmar, 25, dressed in a bright yellow shirt, looked ill and exhausted. He had just recovered from a bout of fever. About seven years back, he had moved to Ahmedabad from Dahod, 200 km to the east, in search of a stable job. Until demonetisation, he generally charged Rs 400 per day, earning around Rs 12,000 per month, and could find at least 25 days of construction work. Now, he accepts Rs 200 per day.

On a monthly income of Rs 4,000 to Rs 6,000 for eight to 12 days of work in a month, he pays Rs 2,000 as rent for a hut in a slum-like neighbourhood that has no running water or toilet; he and other labourers travel more than 2 km to find water each day. His wife, too, is illiterate and a daily-wage labourer, earning about Rs 4,000 a month. Both cycle 2 km to Akhbar Nagar circle. Sometimes they walk, while their three little children ride along on the cycle to work.

“Life was very tough for us, and in these times when we don't have much work, it has become even more difficult,” said Parmar.

Shrivastav of the Mazdoor Adhikar Manch estimated that Gujarat currently had 1.2 million labourers, even though the latest available official data (2017) with the Building and Other Construction Workers (BOCW) welfare board puts the number at 532,895. A quarter of construction workers are women, he said. 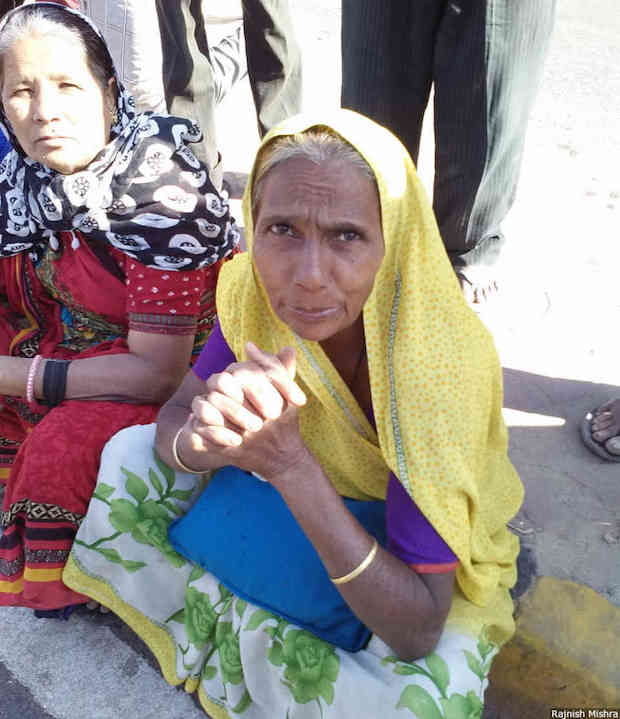 Leelaben Makwana, 60 and illiterate, is a fixture at Akhbar Nagar circle in Ahmedabad. She sits on the road divider with the weariest labourers. “The situation has worsened after notebandi [demonetisation],” she said. Makwana now finds work on about six to 10 days a month, down from 20 before demonetisation, and her wages have dropped by half to Rs 200 per day.

Makwana’s husband died 10 years ago, and since then, she has been a fixture at Akhbar Nagar circle. Dressed in an old printed saree, she sat on the road divider with the weariest labourers. Her stress over the lack of jobs and declining income was compounded by the fact that her son (37) and daughter (35) were not married.

“The situation has worsened after notebandi [demonetisation],” said Makwana, who now finds work on about six to 10 days a month, down from 20 before demonetisation; her wages have dropped by half to Rs 200 per day.

Like Leelaben Makwana, 45-year-old Hansaben Sumera, said notebandi had led to a “dire unemployment crisis” in Gujarat. Dressed in a yellow-and-white printed saree and looking forlorn, she, too, had lost her husband 10 years ago and had been coming to the Akhbar Nagar labour hub ever since to find a construction job.

Sumera earned almost Rs 10,000 per month before demonetisation for between 20-25 days of work; her earnings have dropped to less than Rs 5,000 a month now, and she finds work on eight to 12 days. Her younger daughter, a domestic workers, earns Rs 3,000 a month.

“I really don’t know when things will improve,” said Makwana.

The real-estate industry hopes for a turnaround in 2019.

‘Things will improve this year’

Khalsa of Knight Frank is “hopeful” the slump in Gujarat’s real-estate industry will improve by Diwali of 2019. About 200,000 people migrate to Ahmedabad from rural Gujarat and elsewhere every year, said Khalsa. More buildings will be built, and “this, in turn, will increase demand for labourers”.

Further, said Patel of the Gujarat Institute of Housing and Estate Developers, other issues that caused a real-estate slump are being resolved, including GST regulations, RERA laws, regulations related to the Gujarat Comprehensive Development Control Regulations (related to building permissions, fixing a building’s height, fees, etc.) and the Online Development Permission System (a digital application for project queries).

“Things are improving again, and I expect that they will be completely back on track after the next general elections,” said Patel. “During elections, a lot of spending takes place, and it normally boosts the economy.”

Meanwhile, the BOCW board said it was attempting to boost existing welfare schemes for registered workers, including a death compensation of Rs 300,000 and permanent disability compensation of Rs 150,000. “We have sent a proposal to the state government to increase these two figures to Rs 400,000 and Rs 300,000 (respectively),” said BM Prajapati, member-secretary of the BOCW welfare board.

This is the fourth of 11 reports. The previous stories from: Indore, Jaipur and Perumbavoor.

(Mishra is an Ahmedabad-based freelance writer and a member of 101Reporters.com, a pan-India network of grassroots reporters.)