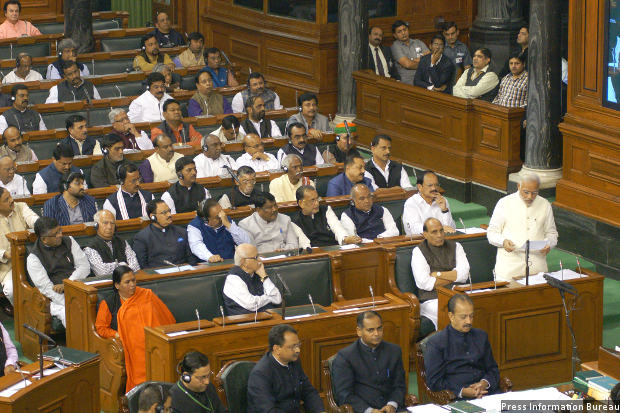 The number of Bharatiya Janata Party (BJP) members of parliament (MPs) in the current Lok Sabha above the age of 70 declined to 8.8%--from 14.2% in the 15th Lok Sabha--and MPs aged 25 to 40 increased from 5.8% to 7.8%, according to an IndiaSpend analysis of data released by PRS Legislative Research, an advocacy.

The current Lok Sabha is the second oldest house of independent India; the first was the previous Lok Sabha (15th).

MPs aged 56–70 years have the highest share of seats (44%) in the current Lok Sabha, while the demographic accounts for only 8% of the total population.

India’s most populous state, Uttar Pradesh, has the highest share of seats (70) in the Lok Sabha; 63% of MPs that represent this state of 200 million are below the age of 56. Half the Lok Sabha MPs from Bihar, Odisha, Maharashtra and Tamil Nadu are below 56 years--younger than those from the remaining 13 states that have more than 15 seats in the Lok Sabha.

UP and Bihar could have younger MPs as their populations are among India’s youngest, with median ages of 20, against India’s median age of 24.

Kerala (20 MPs) does not have a single MP aged between 25 and 40; 65% are above the age of 55. Kerala has a comparatively older population, with a median age of 31, which is, however, low compared to ageing countries--such as Japan, which has a median age of 46.9.

MPs between the ages of 41 and 55, on average, attended 81% of the sessions in the 16th Lok Sabha, and marked the highest attendance. The oldest MPs scored the least, with 76.3%.

The least active parliamentarians are between 71 and 88 years old (the oldest); 34% of such MPs have asked less than 10 questions in the House.

Anandiben Patel, former Chief Minister of Gujarat, cited the BJP tradition of voluntary retirement at the age of 75 as a reason for her retirement.

Babulal Gaur stepped down from Madhya Pradesh cabinet, sticking to the unwritten age limit rule of the BJP.

Many members of legislative assembly (MLAs) were seen rallying behind Uttar Pradesh chief minister Akhilesh Yadav during the clash with his father and Samajwadi Party leader Mulayam Singh Yadav.

“Netaji is ageing and the public understands it will not be possible for him to run the state for a long term,” MLA Mohd Rizwan told the Indian Express.

“Akhilesh is the undisputed leader with a clean image who has set a milestone in development,” MLA Indal Kumar told the Indian Express. “The public is a fan of him, youth are his followers.”

(Alexander is a policy analyst with BOOM, an independent digital journalism initiative.)