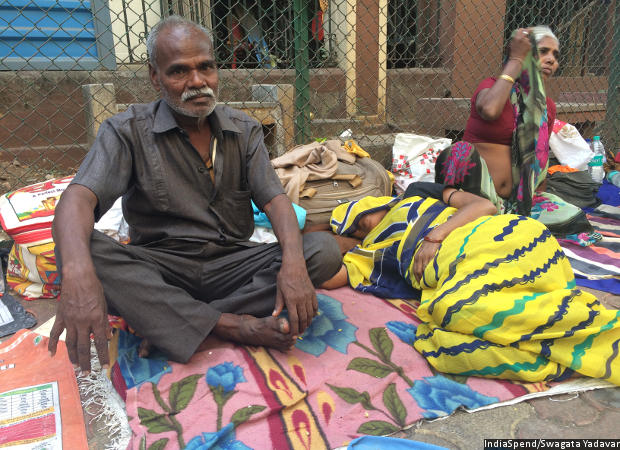 Mahavir Malhar, 52, from Jharkhand came to Mumbai for his wife’s cancer treatment. Their sons cannot send the couple money because of long lines at banks back home. The couple have no money for meals or even tea, surviving on the hospital’s charitable kitchen. Unlike government-run hospitals, private hospitals have not been allowed to use defunct Rs 500 and Rs 1,000 notes, potentially affecting 58% of Indians in rural areas who opt for private healthcare (68% in urban areas).

A spate of deaths due to hospitals refusing to accept invalid currency notes has come to attention after Prime Minister Narendra Modi’s announcement invalidating 86% of India’s currency on November 8, 2016.

Unlike government-run hospitals, private hospitals have not been allowed to use defunct Rs 500 and Rs 1,000 notes, potentially affecting 58% of Indians in rural areas who opt for private healthcare (68% in urban areas), according to National Sample Survey Office (NSSO) data.

In Noida, an infant died after Union Minister Mahesh Sharma's Kailash Hospital reportedly asked for an advance of Rs 10,000 and then refused to take old currency notes.

Despite multiple requests, Finance Minister Arun Jaitley said on November 17, 2016, that private hospitals would not accept old notes because that would encourage misuse of old currency.

Patients who had travelled away from their home states were particularly caught unaware by the move and faced a serious shortage of cash.

On a Mumbai footpath, a cancer patient and husband from Jharkhand struggle

IndiaSpend met 52-year-old Mahavir Malhar and his wife from Jharia, Jharkhand, staying on the footpath outside Mumbai’s Tata Memorial Hospital, a leading referral hospital for cancer patients nationwide. A labourer who earned Rs 200 every day before coming to Mumbai to address his wife’s ear cancer, Malhar had no usable cash.

“We do not have cash to buy meals or even tea,” said Malhar. Although treatment at Tata Memorial Hospital is free, and the hospital accepts old notes, staying in Mumbai is expensive for the couple. Since the note ban, their sons, also labourers, have not been able to send them money because of long lines at local banks.

“They are also daily wage earners and standing in a line for the whole day means loss of income,” said Malhar. The couple now depend on the free meals provided by the hospital and charitable trusts.

@swagata_thinks "If there were no free meals here, we would have abandoned treatment and gone home" he says. Undecided abt #notebandi 3/3 pic.twitter.com/olQij6Qqqr

Other markers of India’s dependence on private healthcare:

Therefore, the government’s decision to not allow private hospitals to accept old notes will restrict access to healthcare for a significant section of Indians, Scroll reported on November 21, 2016.

Lack of cash is making patients prioritise their cash needs, and health issues tend to be pushed back on family priority lists, reported private practitioners from urban centres.

“There has a been a drop of 25%-30% in patients coming to our private out-patient (OPD) department,” said Manish Motwani, bariatric surgeon at Aastha Healthcare, Mumbai. He attributed the drop to a fall in non-emergency cases.

“There was a 40% drop in my patients in the OPD the next day of demonetisation; now the drop is of 10%-15%, but some of my other colleagues are seeing a drop of 50% in the number of hospitalisations,” said Pradeep Gadge, a Mumbai diabetologist. Many doctors said they were allowing patients known to them to pay later.

There has also been an increase in the number of patients in government hospitals, where treatment is largely free or at nominal charges. “We have seen an increase in the number of patients in our primary healthcare centre since the currency ban,” said Amol Bhusare, medical officer at Pallam, a small town in Maharashtra’s Marathwada region, east of Mumbai. Bhusare said two of his patients who had gone to a private diagnostic centre for a CT Scan at nearby Nanded city were turned back for bringing old notes.

“As Rs 500 and Rs 1,000 were banned in haste, those undergoing treatment at hospitals and nursing homes are facing a lot of problems,” said Yadav. “I, therefore, request you to intervene and allow private hospitals, nursing homes and medicine shops to accept these notes till at least November 30."

A few hospitals have pleaded that they be allowed to accept older currency. Mumbai’s Bhatia Hospital wrote to the Prime Minister the day after his initial note-ban announcement. “We are one of the oldest charitable hospitals in Mumbai and requested (that) at least charitable hospitals be allowed to accept older notes,” said Rajeev Boudhankar, CEO of Bhatia Hospital. He said no patient has been turned away. They are accepting payments through other means, including cheques, although three cheques have bounced.

(Saha is an MA Gender and Development student at Institute of Development Studies, University of Sussex. Yadavar is principal correspondent with IndiaSpend.)