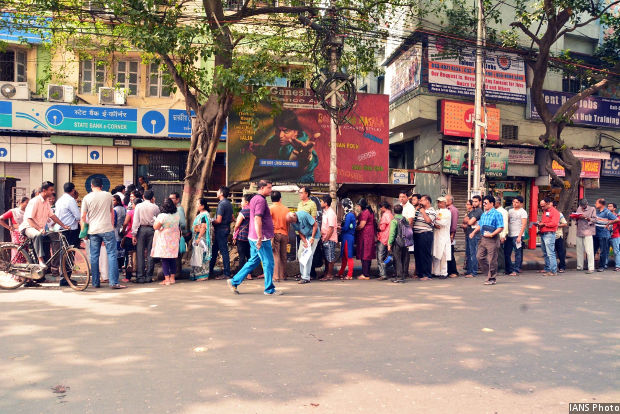 Deposits were nearly five times as large as withdrawals over 10 days to November 18, 2016, after Prime Minister Narendra Modi announced the demonetisation of Rs 500 and Rs 1,000 notes on November 8, 2016.

Banks have also reported to RBI that account holders have withdrawn Rs 1,03,316 crore ($15 billion) during this period.

The Prime Minister, in one stroke, made 86% of currencies worth over Rs 14 lakh crore ($217 billion) invalid, IndiaSpend reported on November 8, 2016.

The government said the move would flush out black--or unaccounted--money from the system, stop terrorism funding and counterfeit currency. But the move also affected millions of Indians who may not have black money but transact in cash. Long lines continue at automated teller machines (ATMs) and banks, particularly in rural areas, to exchange old notes and withdraw money.

The currency with people rose during the last three years–2013 to 2016–against deposits kept by people in banks, RBI data show. From being almost equal in 2007, currency with Indians was 50% more than bank deposits in these three years, IndiaSpend reported on November 12, 2016.

You can also watch videos here:

1)How does demonetisation affect the Indian economy?

Will the move lead to a reduction of black money? Which businesses will be affected most? We spoke to Govind Ethiraj, founder of IndiaSpend, journalist, and founder-editor of Bloomberg TV India, about the implications of the move for the Indian economy.

How quickly can the RBI print currency? Is this exercise actually 'demonetisation'? How accessible is a bank to the average Indian? IndiaSpend spoke to Praveen Chakravarty, senior visiting fellow at IDFC Institute.