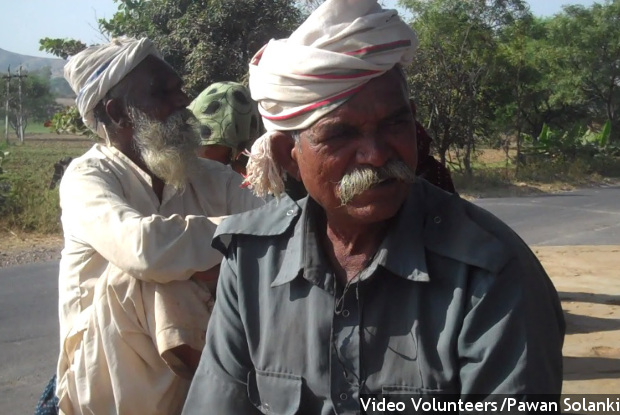 “If I can’t read, how do I know what buttons to press,” said Zumla, a bhil tribal from the village of Footiya, in Jhabua district, Madhya Pradesh, when asked whether he uses an ATM. The government’s push for cashless payments is missing historically disadvantaged populations like the scheduled tribes.

Dhar, Jhabua and Khargone districts (Madhya Pradesh): Santosh Bavash, 30, said he knew about the Internet. “I’ve heard it tells you about the future,” he told IndiaSpend when we spoke to the short and thin labourer, from the village of Gyanpura, in the western district of Dhar, in Madhya Pradesh (MP), one of India’s poorest states.

After the withdrawal of Rs 14 lakh crore--86% by value of Indian currency in circulation--the government has pushed for digital payments to counter the lack of notes in the economy. Of the 28 tribals IndiaSpend met in a state with more tribals than any other, all but two had a bank account (92.8%), 17 had a personal cell phone and knew how to use it (60.7), six owned an ATM card and knew how to use it (21.4%), and two knew about the Internet (7.1%), an indication of the the gulf between Prime Minister Narendra Modi’s vision of a “digital” or “cashless” economy and the reality in India’s most disadvantaged areas.

India has 104 million tribals, 8.6% of the total population. MP has 14.69% of India’s tribal population (15.3 million). Tribals have lower access to banking services, lower income, education levels, and health outcomes than the rest of the population, according to data from Census 2011, and the socio-economic caste census. 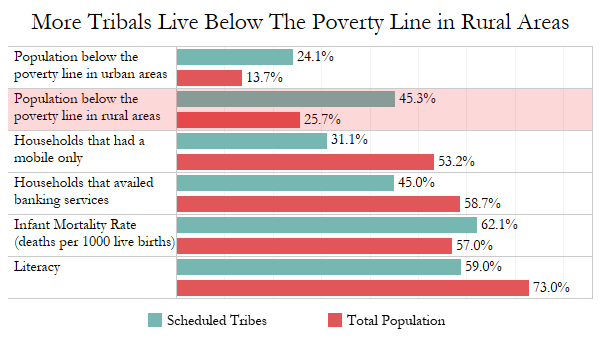 A small group of men and women sat on a raised platform, as a child played on a makeshift swing hanging from a tree. To one side lay farmland, to the other, houses. This was the village of Footiya, in the MP district of Jhabua, along the border with Gujarat. Footiya is inhabited predominantly by adivasis, or tribals, and does not have a post office, a cooperative or commercial bank, an ATM, or a public phone booth, according to information from Census 2011.

Zumla (he uses only one name), a tall, well-built man with a white moustache, also sat under the tree. He said he had had a bank account for years now, but rarely used it because he had little money to deposit into the account, and because going to a bank took very long. It takes him an hour to walk to the nearest bank branch, about 6 km from the village, he said.

“I am anguthachaap,” Zumla, a Bhil tribal with a white turban, added in Hindi, using the term for a thumb impression, a sign of illiteracy. “I use a chequebook (he meant passbook) to put in money and take out money, but I don’t know how to use an ATM,” said Zumla, dressed in a grey shirt paired with a white dhoti tied above the knees. “If I can’t read, how do I know what buttons to press?”

The district of Jhabua--over 91% of all households here are classified as scheduled tribe, the term in the Indian constitution for tribals--has one of the lowest rural literacy levels in the state. Less than half of the population in the district (40.1%), and less than one third of the women (29.8%), in rural areas is literate, according to 2011 Census data.

Overall, tribals have a lower literacy rate than the rest of the population. About half of the tribal population (50.6%) in MP is literate, compared to 70.63% for the population overall, according to data from Census 2011. 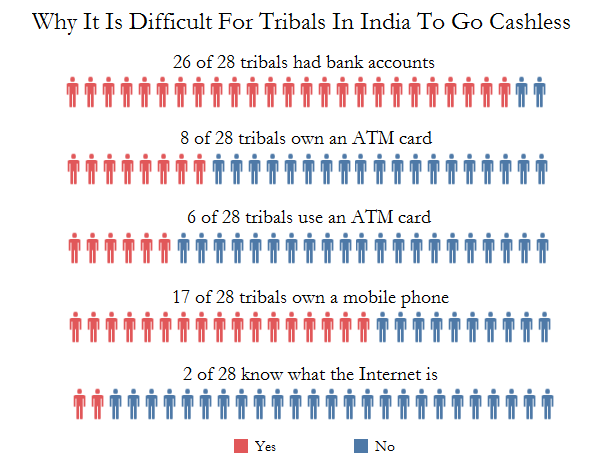 Tribals lag other Indians in use of banking services

Less than 45% of scheduled tribe households used banking services in 2011, compared to over 58% of the whole population, according to Census data.

A lack of jobs and abject poverty meant that some tribals had no money to put into a bank account. “I sometimes get work for four to five days a month, sometimes for 10 days,” said 35-year-old Meera Mujardi, a labourer from Birla village, in Khargone district. She earns about Rs 500 a month, she said, adding that she had a bank account but never used it. About 42% of Khargone’s population is classified as belonging to the scheduled tribes.

A lack of knowledge about ATMs, cellphones or bank accounts emerged as one of the main reasons for the reluctance to use bank accounts and ATMs more often.

Anita (she uses only one name), from Chhatripura village, in Dhar district--64.4% of its population belongs to the scheduled tribes--said she had opened a bank account under the Pradhan Mantri Jan Dhan Yojana, and was given an ATM card. “But no one taught me how to use anything (bank account and ATM card),” she said. She has never gone back to the bank or deposited any money into the bank since she opened the account about a year ago. 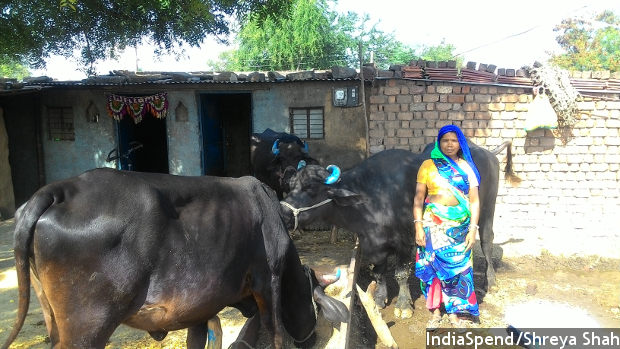 Anita, from Chhatripura village, in the predominantly tribal Dhar district, has a Jan Dhan account, and was given an ATM card. But, she never went back to the bank or deposited any money in her account since she opened the account about a year ago because “no one taught me how to use anything (bank account and ATM card)”.

Those who used ATM cards were either educated, or had been helped by either a friend or a bank official.

Lalsingh Gamad, 30, from the village of Amodiya, in Dhar district, said he had used his ATM card many times. “The bank manager gave the code, and then I took the help of a friend (who had used an ATM machine in the past)”, he said.

In general, researchers have found a strong correlation between the spread of banking and reduction in poverty, as this 2003 paper found in India. “Our estimates suggest that the Indian rural branch expansion program (sic) significantly lowered rural poverty, and increased non-agricultural output,” said the paper by Robin Burgess and Rohini Pande.

Those who get government subsidies use bank accounts, but only 1/3rd use cellphones

Indeed, those better acquainted with government programmes used their bank accounts to access money from direct transfers of government subsidies or doles.

Savitri Bai, a labourer in the village of Chhatripura in Dhar district, said she used her bank account once in two or three months. “I have four children. When the government credited money for bicycles, I went to the bank to withdraw the money,” she said.

Similarly, Gappu Daula, a tribal from the village of Rui, in Khargone district, said he has a bank account in which he receives pension from the government, and agricultural subsidies. “I don’t remember the name of the bank where I have an account, but I know where the bank is in the nearby town,” he said.

When asked whether he used a cellphone, he said: “I don’t know how to, and I don’t even hold one in my hand.” 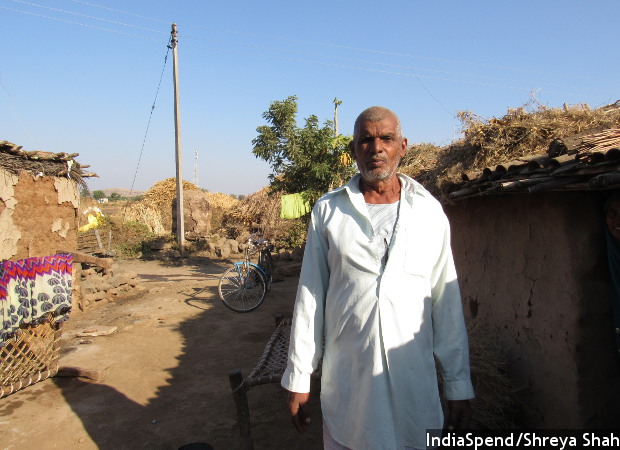 Gappu Daula, a tribal from the village of Rui, in Khargone district, Madhya Pradesh, has a bank account in which he receives pension from the government. “I don’t remember the name of the bank where I have an account, but I know where the bank is in the nearby town,” he said.

Though most households IndiaSpend visited had at least one cellphone, mostly with a male or younger family member, cellphone ownership was still not universal. A little over 31% of tribal households owned a cellphone in 2011, compared to 53.2% of the entire population, according to Census data.

IndiaSpend found that men were more likely to own and use cellphones and ATM cards.

Vanka Bai, who lives in the village of Chhatripura in Dhar district, said her husband owns a cell phone and she doesn’t know how to use it. “If someone calls from my house, he gives me the phone to talk to them,” she explained, as she sat outside her house, mixing cow dung and water.

Only 17% of the Indian population owns smartphones, according to a 2015 survey by the Pew Research Center, while less than 15% of the population uses the Internet.

“I don’t know so much. I don’t have a phone with Internet. How do I know about it (Internet)?” said Mithun Mohan, 21, a labourer from Dhar district, MP.

“I have used the Internet for Facebook, for sending documents,” said Shivram Chouhan, 45, a farmer from the village of Birla, in Khargone district. He said he had completed a college degree in electrical engineering and had previously worked as a private contractor.

Lower price for harvest, difficult to get change for Rs 2,000

Tribals in these areas were mostly farmers or non-agricultural labourers. Farmers said they had been offered lower prices for their harvest than they had expected, and blamed the withdrawal of currency for the lower prices.

“I have been making a loss of Rs 8 per kg on cotton (the main cash crop in the area),” said Gappu, the tribal from the village of Rui, in Khargone district, when IndiaSpend spoke to him on December 6, 2016. “I still sell 5-10 kg every other day at Rs 42 per kg because we need it for household expenses and for paying off debts,” he explained.

Other farmers said they were putting off selling until the prices increased in the market. Syana Natya, a maize farmer from Rui, said the family had put off selling any corn until prices increased. “They are offering Rs 8-9 a kg, but we expect Rs 12-13 a kg,” he said. He added that some traders had offered a cheque but he didn’t have a bank account and didn’t know how he would use one, as he was uneducated.

Others said the local shops had continued to take old notes in the days soon after the withdrawal of notes, but would cut an extra Rs 50-100 over the cost of the items bought. “Shops looted us, and we couldn’t do anything,” said Rajesh Damod, 35, a labourer from Namkheda village, in Dhar district. He added that new notes of Rs 2,000 had reached the village but it was difficult to get change.

Some said the decision would eventually be beneficial to the poor. “The black money that has come out, Modi might distribute it. He might approve the building of a house or something (for the poor),” said Mithun, the labourer from Dhar district.

(Shah is a reporter/editor with IndiaSpend. Video produced in partnership with Video Volunteers, a global initiative that empowers disadvantaged communities with story and data-gathering skills, and trains them to use video as a tool to mobilise for change.)