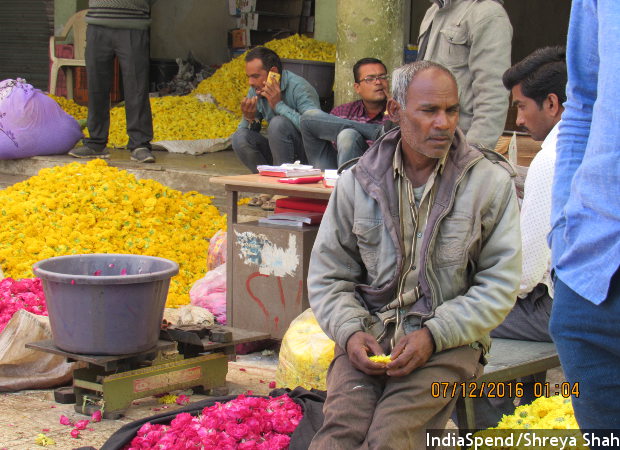 Keshu Singh Patel, a flower and vegetable farmer from Mirjapur, Madhya Pradesh, selling his produce to a retailer at the flower market in Indore, on December 7, 2016. Patel earned 70% less this harvest season because of demonetisation.

Mirjapur and Indore (Madhya Pradesh): As the sun rose in the morning sky, piles of white chrysanthemums awaited Keshu Singh Patel at his 2.5-acre farm in Mirjapur, a village in western Madhya Pradesh. Everyday in the winter, the short, spry, balding 55-year-old takes about 70 kg of flowers, tied to his bike, to sell in the flower market 15 km away.

“I don’t know if I will recover the cost of growing chrysanthemums this season,” Patel said.

Over the harvesting season from October to January, Patel’s income has fallen by 70%. “Four days before and even after notebandi (demonetisation), I was selling sevanti (chrysanthemums) flowers between Rs 30 and Rs 40 a kg; now they sell between Rs 4 and Rs 6 a kg,” he told IndiaSpend.

Patel is one of 118.6 million Indian farmers, as the Census recorded in 2011--equivalent to the population of the Philippines. As many as 9.8 million farmers live and work in Madhya Pradesh, one of India’s poorest states. Patel is a “small farmer”, as he has about 2.5 acres of land, less than the average land held by an Indian farmer (2.84 acres), according to the agricultural census of 2010-11.

At midnight on November 8, 2016, Rs 14 lakh crore–or 86% by value of Indian currency in circulation–became defunct after Prime Minister Narendra Modi announced that Rs 500 and Rs 1,000 notes would no longer be considered legal tender. The largest impact appears to be on the informal economy, which employs 82% of India's 500-million-strong workforce and generates half of India’s gross domestic product (GDP). Businesses ranging from tourism, retail and infrastructure are also adversely affected, according to the this December 7, 2016, story in LiveMint.

The government has pushed for digital payments to counter the lack of notes in the economy, but challenges of cell phone connectivity and low Internet usage, especially in rural areas--where less than 15% use the Internet--abound, as IndiaSpend reported on December 10, 2016. Many farmers said they did not know how to use the Internet for banking or had too little in their bank accounts to use for everyday transactions.

If the crop is good, and flowers sell well during the wedding season--November 15 to December 15--Patel could have made about 2,600 a day. On, December 7, 2016, when IndiaSpend followed Patel, he earned Rs 543. The plant is sowed before the monsoon and flowers between October and January.

Patel is forced to sell at a lower rate because flowers wither fast, and their rate reduces with time. “I had to throw 35 kg of flowers because there were no buyers yesterday,” he said.

Patel reached the bustling flower market in Indore--considered Madhya Pradesh’s commercial capital--by 7 am. He entered the flower-strewn arena--there are 51 license shops in this government market--on his motorcycle laden with flowers tied in makeshift bags of bright yellow, green and red cloth. 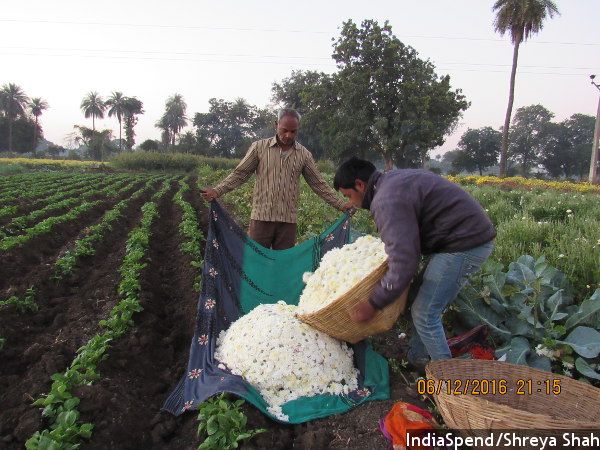 Keshu Singh Patel and his son, Kantilal, fill flowers into make-shift cloth bags at his farm in Mirjapur, Madhya Pradesh. The flowers sold at lower prices because of demonetisation.

In the market, because of a lack of notes, other farmers have lost between 50% and 80% of their income in the last 25 days.

“Methi is selling for Rs 2 to Rs 5 a kg, down from Rs 10 a kg,” he said, sitting in the midst of heaps of green leaves. He had no choice but to sell, as the leaves would soon rot.

“My guldavri (local name for chrysanthemums) sold for Rs 7 a kg. This is the season of weddings. It should have sold for at least Rs 35 to Rs 40 a kg,” said 36-year-old Mukesh Mukatil, who had brought about 90 kg of flowers to the market.

Bundles of locally-grown red gladiola flowers were selling for half the price, down from Rs 225 for 10 sticks to Rs 120, farmers said.

Note: Prices based on farmer estimates in Indore mandi, December 5 and December 11, 2016.

Patel cuts chrysanthemum stalks; they are too expensive to maintain

Around 12:30 pm, Patel returned to the farm, as three labourers were cutting down the stalks of the chrysanthemums planted on about 0.2 acres of his farm. His family spent the day plucking flowers off the other plants so Patel would have enough to sell the next day.

Of his 2.5 acres, about a fourth of an acre lies fallow, as their isn’t enough water for the crops.

After selling one crop of flowers, Patel would have waited for the plants to regrow and sold another batch. “But because prices are low, it is more expensive to maintain the plants,” Patel explained. In a regular year, the plants would have been cut in the end of January or February.

“To add to it, there is a higher quantity of flowers coming into the market which has reduced prices further,” said Sharad Kusumakar, 61, who owns a shop in the flower market.

When IndiaSpend spoke to Patel’s son, Kantilal, on December 13, 2016, he said the market had picked up a little, with chrysanthemums selling between Rs 10 and Rs 20 a kg. “But we’ve already cut down the stalks,” he said, adding that the recovery of prices wouldn’t benefit them.

Patel can no longer get state handouts. His saviour: Credit

Patel and his family moved above the rural poverty line of Rs 816 per person per month some years ago, and so can’t access the lower-priced wheat, rice, sugar and oil, families below the poverty line receive from the government's public distribution system.

Why it is difficult for Patel to go digital and cashless

Since demonetisation, the government has been pushing digital payments but most transactions still take place in cash.

Most farmers and traders IndiaSpend spoke to had bank accounts, but used cash. They said they either had too little money to put in a bank account or did not use debit or credit cards regularly. All transactions Patel made during the day were in cash: He filled petrol worth Rs 50 in his motorcycle in the morning, and bought a dozen bananas for Rs 40 in the afternoon.

“Before depositing Rs 500 and Rs 1,000 notes after notebandi, I had used my bank account about two years ago,” Patel said, as his two-year-old granddaughter played in the field. His son, Kantilal, has an ATM card, but used it only once in 5-6 months to withdraw cash, as he had little money in his bank account. The nearest ATM and their bank branch is a 15-minute ride from their village.

The family has one basic cell phone they use to call relatives. Though Kantilal has used the Internet in the past, neither father nor son currently has access to the Internet as a smartphone was too expensive to afford.

For four months last year, the family used a Samsung smartphone, which they bought for Rs 8,000. “But someone stole the phone,” Kantilal said. He had used Internet on the phone only to access Facebook, he said, adding that they wouldn’t buy a new phone because it was too expensive--equivalent to almost all of their profit this season.

Not everyone has a bank account. Jagganath Mahadeo Bhuyyer, 66, a trader in the market, said he had no plans to open a bank account. “I earn enough to eat twice a day, what’s the point of all this jhamela (rigmarole),” he said, when asked why he doesn’t have a bank account. “If I had a bigger business, I would have opened an account.”

For Patel, low flower prices mean he has to dip into his savings to pay Rs 130 a day to two labourers who help his family pluck flowers.

“We always face problems of water and electricity shortage,” said Patel “This year notebandi has spoiled the year for us.”