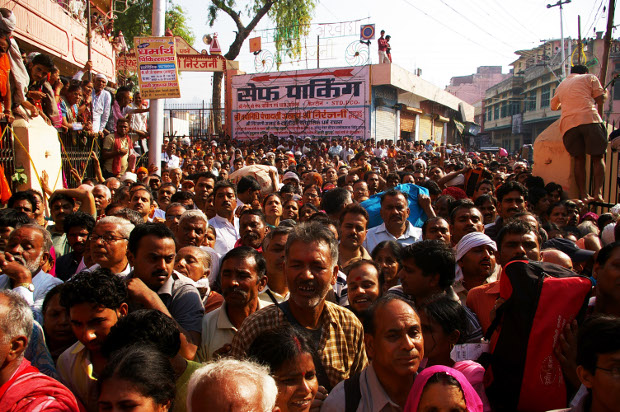 With a total population of more than 1.2 billion people and growing, India’s population is set to stabilise after 2026, meaning, it will eventually stop increasing.

For now, India is the second-most-populated country in the world and by these estimates, we will surpass China by 2050, when India’s population will be 1.5 billion and China’s 1.4 billion. Both countries are together home to 38% of the global population of 7 billion.

On World Population Day today, let us compare the eight most populous Indian states against select emerging-world countries—an easy matter, given the large populations of these states—and how their fertility rates will affect future growth. 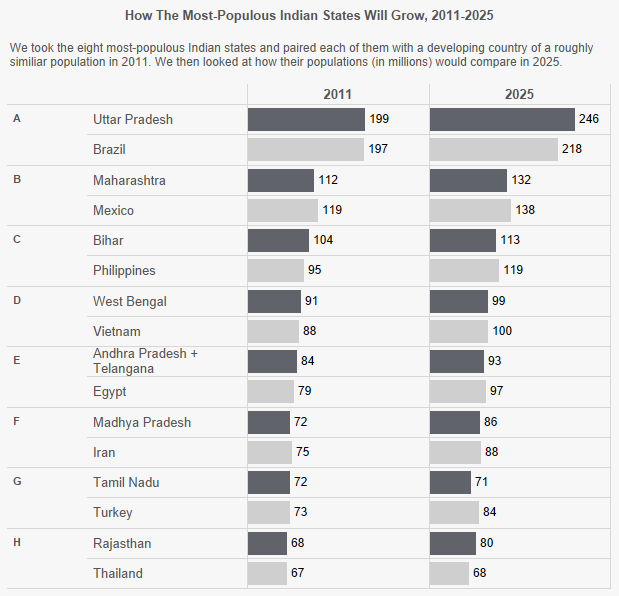 Maharashtra had fewer people in 2011 than the international counterpart we have chosen, Mexico, but with present fertility rates, that will change by 2025.

What the growth rates ordain

Here is how the population growth rates compare between the Indian states and their international counterparts: 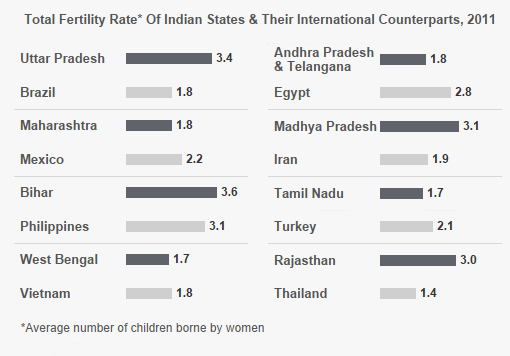 Total Fertility Rate (TFR) is a measure of population growth. The TFR of a population is the average number of children that a woman bears over her lifetime. India's TFR today is 2.6 children per woman, less than half that of the 1950s, when it was 5.9, but it is still too high to stop population growth.

The TFR required to stabilise the population is 2.1 children per woman, which is called the replacement rate. The northern states hold the key. If India as a country has to reach 2.1, the northern states must reduce their TFR to two or lower. That does not seem immediately possible.

Over the next decade, India will speed up before slowing

Most of the emerging world will not grow as fast as India over the next decade.

India's most populous states, the large northern states in particular, have high fertility rates, and that will keep India's population growing.

So, Uttar Pradesh will have more people than Brazil and Maharashtra more than Mexico.

However, states like West Bengal and Tamil Nadu with lower fertility rates, will have lower populations than their counterpart countries over the next 10 years. West Bengal had more people than Vietnam in 2011, but by 2025 it will have fewer.

"The size of India's future population will largely depend upon the course of fertility decline in the highly populous north," said this study from the Population Reference Bureau. "While clearly in the third phase of the transition, will India move to the fourth phase of replacement fertility or will it join that group of developing countries where that seems doubtful? For the fourth phase to begin, fertility in the very large and poor Indian states will have to decline to that of an industrialised country, around two or fewer children."