No Tigers In Bangladesh Sundarbans By 2070, As Region Faces 100% Habitat Loss Over Next 50 Years

Mumbai: Bengal tigers could vanish from the Bangladesh Sundarbans in the next 50 years--by 2070--as a combination of climate change and rising sea levels threatens their last remaining habitats, says a new study by a team of researchers from Bangladesh and Australia, published in the journal Science of the Total Environment.

The Sundarbans in south-coastal Bangladesh is the world’s largest surviving mangrove ecosystem, spanning over 6,000 sq km, and “the last stronghold” of the Bengal tiger, a species that is particularly adapted to living in this environment. Situated on the lower Ganges-Brahmaputra delta, up to 70% of the Sundarbans area is less than one metre above sea level, meaning rising water levels pose a significant threat to the low-lying tiger habitats. Meanwhile, climate change effects such as changing weather patterns, heatwaves and extreme weather events are likely to have an even greater impact, the study says.

Using computer simulation models based on two climatic scenarios developed by the Intergovernmental Panel on Climate Change (IPCC), coupled with projected sea level rise in the area, the researchers have assessed the future suitability of the Sundarbans region for tigers.

“While this is preliminary analysis, we can conclude that the largest population of Bengal tigers is in an area where a combination of actors including climate change and human encroachment could both contribute to the decimation of habitats,” William Laurence, distinguished research professor at James Cook University and co-author of the study, told IndiaSpend.

The global tiger population is currently estimated at just under 4,000, with an illegal trade in tiger parts, hunting and habitat loss having culled the population by 96% from 100,000 in 1990, the study says. Three of the eight sub-species of tiger have already become extinct, with the remaining five species currently either ‘endangered’ or ‘critically endangered’.

As global temperatures rise and melting polar ice raises sea levels, the influx of salinated sea water can make it harder for certain plants to grow, subsequently decreasing the availability of certain food types. The Sundarbans’ spotted-deer population, a key food source for the Bengal tiger, is likely to be affected as the tree leaves on which it feeds begin to disappear. As resources become scarce, tigers are more likely to stray into human settlements in search of food, increasing the chance of tiger-human conflict. 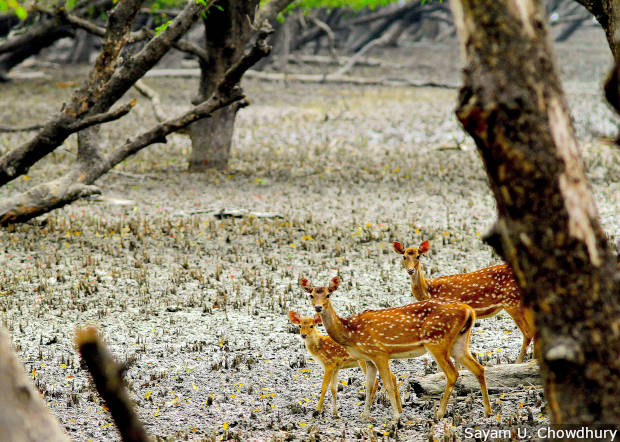 Spotted deer, a key food source for the Bengal tiger, are facing food shortages as the vegetation they feed on struggles to grow in salinated land--an example of how climate change and rising sea levels is impacting the Sundarbans ecosystem.

The loss of the world’s largest mangrove ecosystem also raises concerns for human populations and other animal species. Mangroves are an effective water regulation system, preventing shoreline erosion that also act as a shelter belt against cyclones and tsunamis. Villages surrounded by mangroves experienced less loss of life and capital during the 2004 tsunami, than those that were not, according to this 2005 Annamalai University study.

“From an environmental perspective, mangroves are recognised as environmentally critical ecosystems,” said Laurence, “they store a lot of carbon and are very important for trapping sediment along coast lines.” Their role as nurseries for fish is often not appreciated, he said, adding, “They are critical environments for crustaceans and fish, as well as acting as buffers for extreme weather events.”

Each climate projection, based on two different levels of global greenhouse gas emissions used by the IPCC, estimates “a dramatic decline” in suitable habitats for the Bengal tiger. Up to 49.7% of habitat loss is projected under the first scenario by 2050, and up to 96.2% under the second scenario.

Although sea-level rise will further threaten the Bengal tiger’s habitats, the effect will “not be as pronounced as climate change”, the study says. Under both IPCC scenarios, sea level rise will contribute 5.42% and 11.3% habitat loss in the area, respectively.

Source: Intergovernmental Panel on Climate Change, 2014
Note: Scenario 1 refers to Representative Concentration Pathway (RCP) 6.0 and scenario 2 refers to RCP 8.5, both of which are future scenarios projected on the basis of greenhouse gas emissions and their atmospheric concentrations, air pollutant emissions and land use.

However, with the effects of climate change and sea level-rise combined, “there will be no remaining Bengal tiger habitat in the Sundarbans by the year 2070”, as the habitat loss will be complete, the study says.

“Sea level rise of course relates to climate change, but in this particular study they were analysed separately,” said Laurence. “Our models analysed how weather trends and extreme events should affect habitat suitability for the Bengal tiger and these climate change effects came out as having a stronger impact than sea level rise.”

The effects of rising sea levels and climate change in the Sundarbans delta area have been widely reported in recent years. An increase in Bengali-speaking students in Kannada-medium schools in east Bengaluru, for example, may be the result of forced migration, IndiaSpend reported in December 2018. Rising tides in low-lying areas of West Bengal are threatening traditional coastline communities, encroaching on buildings and negatively impacting agriculture.

For the Bengal tiger at least, researchers believe the population could continue to live in the region if tiger conservation is prioritised. The study calls on the Bangladesh government to designate more areas for tiger conservation, create corridors to help tigers move around the region more safely and continue monitoring illegal human activity in the area to avoid further losses.

However, while this study estimates total decimation of suitable tiger habitats in the next 50 years, not all experts believe the outlook is so bleak.

“I don’t subscribe to such a doomsday view,” said Sugata Hazra, professor of oceanography, school of oceanographic studies, Jadavpur University, Kolkata. “When we conducted our 2016 study, we accounted for a ‘sediment attrition rate’, since mangroves are also building land in the area as they attract sediment.”

“This has to be compensated for as well as sea level rise,” Hazra said, “Our study estimated maximum 17% area loss.”

What does this mean for India’s Bengal Tigers?

Up to 40% of the Sundarbans region, a 4,000 sq km area slightly larger than Goa, is situated in West Bengal in eastern India. An estimated 103 tigers currently inhabit the area, which houses the Sundarbans Tiger Reserve.

The effects of climate change and sea level-rise are expected to affect the Indian Sundarbans in a similar way as the Bangladesh Sundarbans, suggesting the fate of Indian tigers is deeply intertwined with that of their neighbours.

However, some believe classifying part of the region and parts of the tiger population as Indian, and some as Bangladeshi, may be hindering conservation efforts.

“We need to think beyond boundaries in order to form joint ecosystem best management practices,” said Hazra. “Tigers can cross easily between India and Bangladesh so the tiger population is not a separate one; they live in a transnational ecosystem.”

A basin-level approach with closer cooperation on forest sharing, tiger habitat sharing and management of the freshwater supply is what is needed, Hazra said, adding, “We need to form this joint force now, perhaps led by an international organisation. If we start now, we’ll see the benefit in 20 years--but if we don’t, then we won’t see anything.”