No Investment, No Growth. Simple. 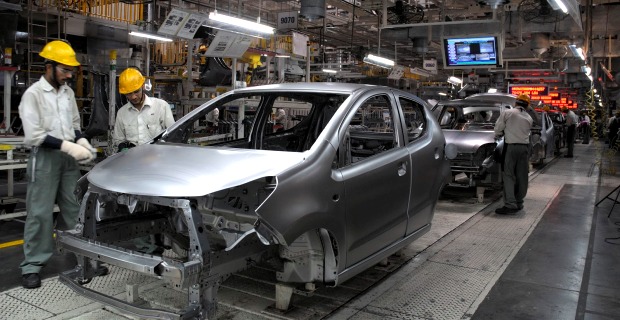 India’s Prime Minister Manmohan Singh this week released a Report To The People on the achievements of the United Progressive Alliance (UPA) in the nine years that it’s been in Government.

In the report, he acknowledged the domestic slowdown but also attributed it to external factors. “India was among the fastest growing economies of the world with an average growth rate of 8% in the last nine years,” he said. Mr Singh also admitted that many large investment projects were held up because of various regulatory clearances.

Let’s look at two points, first what spurred this growth in the first place and second, whether the preconditions exist for a return to a higher growth path. Whichever way you look at it, it’s clear that India’s growth has fallen way below average. Growth, as measured by gross domestic product (GDP) for the last quarter fell to a decade-low, coming in at 4.5%, in stark comparison with the average growth of 8% over the past decade.

Why Investment Is Critical

A close look at the expenditure components of India’s national income reveals that one major drag on GDP growth in the recent past has been domestic investments or GCF. In other words, minimal growth in investment has significantly contributed to slowing down India’s growth in recent times.

Why is the investment component so important for India’s growth? First, the contribution of investments (defined as the sum of gross fixed capital formation, change in stocks and valuables) to overall GDP for the third quarter of 2012-13 is currently at a falling 33%.

Now, as per the advance estimates of the Central Statistical Organisation (CSO), GCF or investments are expected to have grown only at 3.9% in 2012-13, preceded by a no show in 2011-12 as well (growing by a negligible 0.5%). This is in stark contrast with the two prior years when investments grew in double digits (see chart). 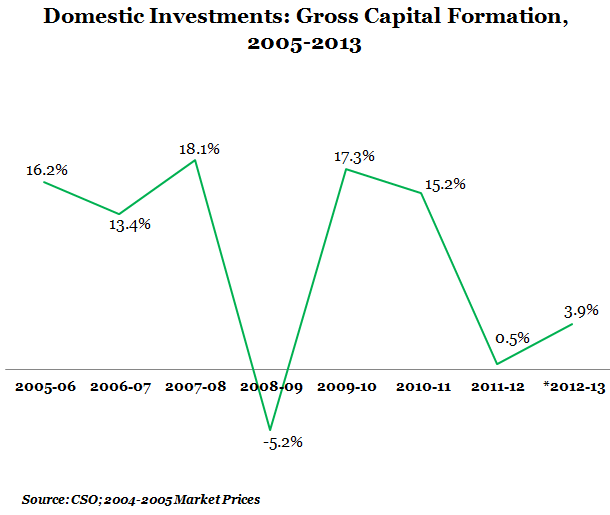 Not only does this hit overall GDP growth, it is also a reflection of how investments in the economy have declined. The combination of slowing global economic activity, its impact on domestic economic activity and high inflation are some of the reasons for the slow down in investments.

Further, during years when growth is expected to slow down or has already slowed down, incomes in the private sector become stagnant or grow slowly. This leads to either lower absolute real incomes or lower growth in real incomes where real income is measured as income adjusted for the effects of inflation.

So, rise in prices or inflation remaining the same, if incomes have not grown over the year, real income is effectively less than what it was during the previous year. With prices rising and incomes remaining unchanged or growing slowly, consumers need to spend more and more to run their households. This leads to less funds in the hands of the consumer to save and invest and gets reflected in overall investment slowdown over time.

Thus, it is not surprising, that GCF has grown at only 1.4% over the April-December 2012-13 period in comparison with the corresponding period of the previous year. This is an even more disappointing number in light of the fact that in during 2011-12 it grew by 1.9% per cent, which was a low enough rate as it is. This growth also compares rather unfavourably to other components of the GDP like private final consumption expenditure and government final consumption expenditure at 2.9% and 5.7% respectively. (see table for more details). 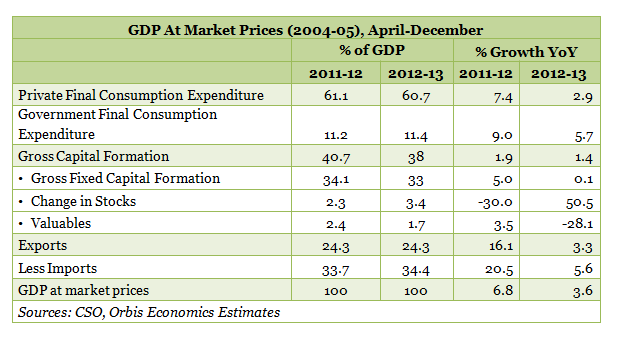 Added to this situation is the fact that Indian inflation has been quite high in the recent times, at over 7% in 2012-13 and almost 9% in 2011-12 as measured by the Wholesale Price Index (WPI). In a recessionary time, this has led to the Indian consumer being squeezed on both sides –incomes have not grown and prices have risen quite fast. As a result, a savings and investment slowdown was only to be expected.

Is an investment pick up possible?

While worrisome, the current condition in investments does not call for a write-off on the India story. Why? Because, it is a typical phenomenon seen during recession and recession is a fact of economic cycle. There are no booms without busts and vice versa! While policy impetus can soften the impact of a recessionary scenario, it cannot entirely do away with a recession.

We have to wait for the cycle to turn, and that turn is already becoming visible to a small extent. Inflation, for one, has come off to acceptable levels, which can be a spur for savings and investments. India’s interest rates are being softened, which is also a plus... and policy reforms have revived foreign interest in India. So, a turnaround is quite possible even if it takes some time....