No Improvement In Drinking Water For Elementary Schools Over 6 Years 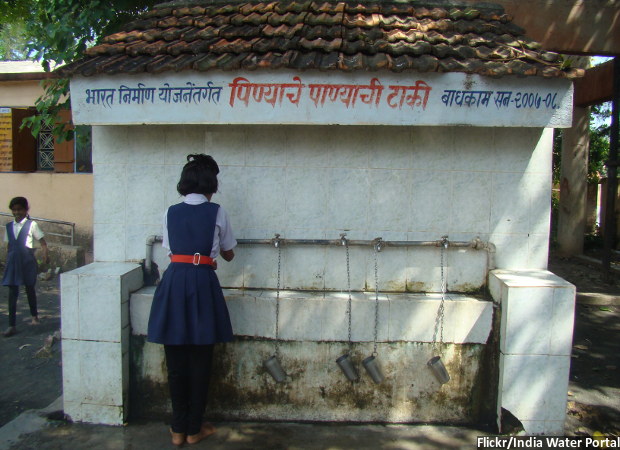 Drinking water facilities include handpumps taps, any other form like an earthen pitcher or other storage vessels etc.

In 2016, the ASER survey was conducted in 589 out of 619 rural Indian districts, and surveyors visited 17,473 elementary schools. ASER has been collecting data on water and sanitation infrastructure in rural government elementary schools since 2009.

Almost 200 million students are enrolled in elementary government schools in India. It is important to ensure that these students are provided with safe and potable water to avoid the risk of bacterial infections that lead to conditions like diarrhoea. Studies have shown that early childhood diarrhoea is linked to absenteeism in schools, malnutrition, and even stunted growth and development.

Drinking water facilities face similar problems as sanitation facilities in schools. In 2016, as many as 96.5% of rural elementary government schools in India had toilets, but more than one in four toilets (27.79%) were dysfunctional or locked, as IndiaSpend reported on July 19, 2017.

In September 2014, the central government launched the Swachh Bharat Swachh Vidyalaya (Clean India Clean School) program, “a new government roadmap for WASH (Water, Sanitation and Hygiene) in Schools”, according to a handbook on ‘Clean India: Clean Schools,” prepared by UNICEF for the Ministry of Human Resource Development. It stresses the importance of the “provision of child-friendly and sustainable safe drinking water”, amongst other things.

But the government does not track the usability of drinking water infrastructure, and nor is this addressed in various government documents on water and sanitation.

The Sarva Shiksha Abhiyan (Education for all) framework for elementary education specifies that provision for drinking water in every school is a must. The “department of drinking water supply in the Ministry of Rural Development, Government of India has a provision under the National Rural Drinking Water Mission to provide drinking water facility in rural schools,” the framework said, but does not explicitly mention the usability of such facilities.

Like usable drinking water facilities, the District Information System for Education (DISE), the main source of data on school drinking water, does not collect data on the quality of drinking water. Although there is a provision to test drinking water under government guidelines, there is little information on the frequency of testing, and the findings of such tests, which are supposed to be recorded with the district administration, are difficult to access.

In 2011, half of the schools in seven districts across India had contaminated water, according to a rapid human development assessment called PAHELI (People’s Assessment of Health Education and Livelihoods) by ASER, which conducted faecal coliform tests on rural school drinking water.

Little progress in provision of drinking water in schools

In many states, even the availability of infrastructure for drinking water seems to be a problem that is getting worse.

Data show a similar picture at the state level.

The decline in drinking water facilities, even with resources and policy directed towards the construction of new water provisions, suggests that maintenance and regular evaluation of old infrastructure is important.

(Bhattacharyya leads the water and sanitation activities of ASER Centre. Gangwar is an undergraduate student of political science and economics at Ashoka University, Haryana, and recently interned with the ASER Centre.)