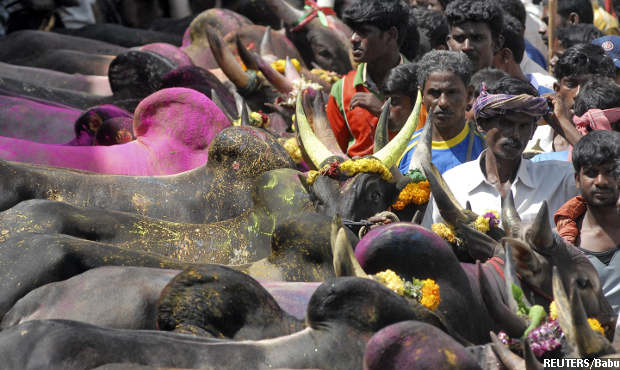 No decoration of livestock, no nose-cutting or ear splitting for identification without veterinarians are among the new rules aimed at preventing cruelty to livestock, but there might be challenges in implementing the law, according to an IndiaSpend analysis.

On May 23, 2017, a new notification aimed at regulating and managing animal markets, the “Prevention of Cruelty to Animals (Regulation of Livestock Markets) Rules, 2017”, mandated the creation of agricultural market committees to regulate and monitor the sale of animals and the space used for the sale, and prohibited “cruel and harmful” practices such as using chemicals on body parts, shearing and painting of horns, sealing teats to prevent a calf from suckling.

These rules apply to bulls, bullocks, cows, buffalos, steers, heifers, calves and camels, and would affect the nearly 300 million cattle in India, and their owners, based on the 2012 livestock census.

Of those in rural India, 43.58% of households reported farming animals between January and June, 2013, according to a survey by the National Sample Survey Office. Even the landless, marginal and small farmer depend on livestock with 1,586, 1,518, and 2,575 bovines (including cattle and buffalo), respectively, per 1000 households, the survey found.

“The common cruel practices in cattle markets prohibited by this Rule have strong scientific, legal and animals welfare reasons,” said Nikunj Sharma, the public policy lead at the People for the Ethical Treatment of Animals (PETA), an advocacy.

For example, hot branding, used as a method for animal identification, causes permanent hair loss and burns on the skin enough to leave a scar, he told IndiaSpend through email. Horn-shearing and painting (which contain chemicals like lead) could lead to cancer in cattle, while putting ornaments and decorative materials causes a lot of distress and discomfort to animals, he added.

It is important to stop the use of harmful chemicals on cattle which could affect their health, said Prabhakar Kelkar, national president of the Bharatiya Kisan Sangh, a farmer union, affiliated with the Rashtriya Swayamsevak Sangh. He also supported rules which would ensure better treatment of animals at animal markets, where often sellers don’t care enough about the animals to even feed them properly, he said.

The new rules say that it is the duty of the person in charge of an animal in an animal market to ensure that the animal is not, or is not likely to be, caused injury or unnecessary pain or suffering because of exposure to the weather or inadequate ventilation, and that the animal should not be hit or prodded with any instrument, hurt by nose ropes or nose pegs, tethered on a short rope for an unreasonable period, or suffer from thirst or starvation.

But “some of these provisions are laughable”, said Kelkar. For instance, he explained, decorating cattle shouldn’t be seen as cruelty, and is a tradition related to certain festivals such as Diwali, and shows the love and affection of the cattle owner.

“When cattle are decorated so well, you feel like taking a picture of them!” he said.

For other rules such as those banning the use of paint, which some farmers use to identify cattle, Kelkar said: “How will someone identify cattle that is lost or, if a village has 1,000 cows how will people identify which one is theirs?”

“If you say these shouldn’t be done, give us an alternative and tell us what can be done.”

For the rule that mandates that only veterinarians perform procedures such as ear-cutting to make an identification mark on the animal, Kelkar said that there is limited access to veterinarians in rural areas. There are more veterinarians in India than needed, with 67,784 registered veterinary practitioners against the 67,200 required, according to government data, but the number of doctors currently operating is unavailable.

Still, “cattle owners would have to spend money and time to reach an animal doctor”, Kelkar said. “These rules are impractical. What does it matter what is on paper. Do we have the machinery to implement something like this?”


Prohibited Practices: New Rules and The Prevention of Cruelty to Animals Act, 1960

Prohibited Practices That Are Cruel And Harmful

Makes it a punishable offence if a person

Animal identification methods such as hot and cold branding

Beats, kicks, over-rides, over-drives, over-loads, tortures or otherwise treats any animal so as to subject it to unnecessary pain or suffering or causes, or being the owner permits, any animal to be so treated

Shearing and painting of horns

(Employs in any work or labour or for any purpose any animal which, by reason of its age or any disease) infirmity; wound, sore or other cause, is unfit to be so employed or, being the owner, permits any such unfit animal to be employed

Bishoping in horses and ear cutting in buffaloes

Casting animals on hard ground without adequate bedding during farriery

Conveys or carries, whether in or upon any vehicle or not, any animal in such a manner or position as to subject it to unnecessary pain or suffering

Use of any chemicals or colours on body parts of animals

Keeps or confines any animal in any cage or other receptacle which does not measure sufficiently in height, length and breadth to permit the animal a reasonable opportunity for movement

Any person forcefully drenching any fluids or liquids or using steroids or diuretics or antibiotics, other than by a veterinarian for the purpose of treatment

Being the owner, neglects to exercise or cause to be exercised reasonably any dog habitually chained up or kept in close confinement

Forcing animals to perform any unnatural acts, such as dancing

Being the owner of (any animal) fails to provide such animal with sufficient food, drink or shelter

Putting any ornaments or decorative materials on animals

But the Act specifies that:

Nothing in this section shall apply to - (a) the dehorning of cattle, or the castration or branding or noseroping of any animal in the prescribed manner, or (b) the destruction of stray dogs in lethal chambers 20[by such other methods as may be prescribed] or (c) the extermination or destruction of any animal under the authority of any law for the time being in force; or items that come under section IV on "EXPERIMENTATION OF ANIMALS"

Castration of animals by quacks or traditional healers

Castration of equines by quacks

There is a lot of government inertia with regard to updating or making new laws and the last updation of the law was in 2001, said Nuggehalli Jayasimha, lawyer and India managing director of Humane Society International. “When we were writing the draft, we thought we want it to be incremental but not make such a law that will become obsolete very soon.”

“The only way to change things in India is by making the law, and hope that the infrastructure and state machinery will catch up,” said Jayasimha. “Whether we are right or wrong only time will tell.”

In addition to the already existing State Animal Welfare Board, mandated by the 1960 Prevention of Cruelty to Animals Act, the new rules ask for the creation of two new committees--one for regulation of the animal market and one for its management.

The District Animal Market Monitoring Committee--whose members would be the district collector or magistrate, chief veterinary officer, jurisdictional divisional forest office, two representatives from animal welfare organizations, and a representative of the Society for the Prevention of Cruelty to Animals (SPCA)--would, among other things, ensure that an animal market has adequate shade, lighting, toilets, non-slippery flooring, and sand pits for rolling of equines, before any new animal markets are registered.

The second committee, called the Animal Market Committee, would include the chairman of the local authority, the chief municipal officer, a tahasildar member, the jurisdictional policy inspector, a veterinary officer, a representative of the SPCA, and two representatives from animal welfare organization, and is responsible for the “upkeep of a market or for the provision of fixed facilities there and for ensuring the welfare of the animals being traded”.

“For effective implementation of this Rule, both these committees have to function efficiently,” said Sharma of PETA.

The rules empower the state board and local committees to enter at any reasonable time into any market, ask for any record from any person with respect to the market, seize any animal they have reason to believe is being treated cruelly, and take photographic and video proof of the cruelty to animals.

“The rules could allow some abuse and by the committee,” said Darshana Mitra, an advocate with the Alternate Law Forum, but that it depends on how the law would be implemented. Further, “the scale and diversity of animal markets might make it tough to regulate and monitor them”, said Mitra.

“Having elected representatives, and members from different departments reduces the chance that any one of them could misuse the law,” said Jayasimha.

Questions on the constitutionality of the law

Petitions have been filed against the new rules for going against the original 1960 Act, and for infringing upon state’s rights. The Tamil Nadu High Court has suspended these restrictions for four weeks to determine their constitutionality, according this article in the Financial Express.

“The Centre is not empowered to make laws on livestock markets” which is a state subject, said Mitra.

The government said the new guidelines were a response to a Supreme Court order, passed in a case filed by an animal rights activist Gauri Maulekhi, to frame guidelines to prevent animals from “being smuggled out of India for the Gadhimai Festival held in Nepal where large scale animal sacrifices took place”.

These animals would be stopped by police or border security forces and no one would know what to do, as it wasn’t the role of security forces to take care of these animals, said Jayasimha of Humane Society International, who was also involved in drafting the rules as part of a member of the Animal Welfare Board of India. “The solution to this problem was regulating livestock markets.”

He said one of the main aims of the law was to create pressure on big slaughterhouses, which have the power to create backward linkages for the animals they buy and improve traceability of cattle and prevent abuse. The aim of the rules was not to manage the small farmer markets in villages, but the big intermediary markets run by commission agents where the abuse of animals takes place, he added.

(Shah is a reporter/writer with IndiaSpend. Delna Abraham, a public relations major from Symbiosis Centre for Media & Communication, contributed to this story.)