Nipah Contained, But More Than 80% Cases From Similar Brain Fevers Are Undiagnosed

New Delhi: Kerala health minister KK Shailaja announced on June 10, 2018, that the state’s Nipah virus infection (NiV), which killed 17 out of 19 affected over 21 days and has no cure, had been contained, with the recovery of the last two patients who tested positive.

“The virus has been stalled,” union minister of state for health Ashwini Choubey told the news agency PTI on June 9, 2018. “There has been no cases of Nipah reported from anywhere in the country. This is a good sign. Nipah is no epidemic. There is nothing to be scared of.”

An emerging disease, NiV spreads from animals to humans, and there is no vaccination. The virus primarily causes fever and headaches and after five to 14 days causes symptoms similar to encephalitis--drowsiness, disorientation, mental confusion and even coma--and has a mortality rate of 40-75%. Kerala’s public health officials were lauded for detecting the Nipah virus in time and containing it. 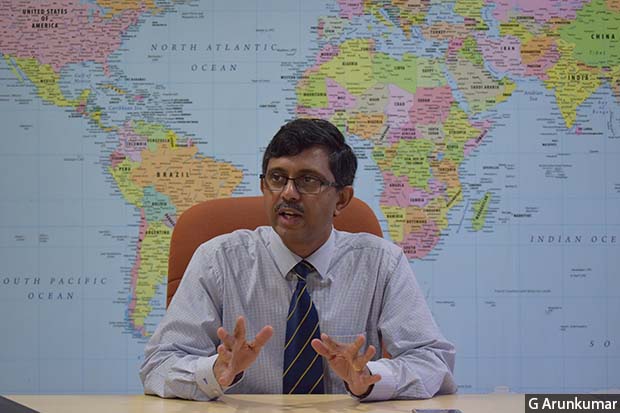 India cannot be complacent about its response to other cases of acute encephalitis syndrome or AES cases including Nipah, said G Arunkumar, 47, professor and head of the Manipal Centre for Virus Research (MCVR) of the Manipal Academy of Higher Education (Deemed University), Manipal

One of the scientists at the forefront of the identification and diagnosis of NiV was G Arunkumar, 47, professor and head of the Manipal Centre for Virus Research (MCVR) of the Manipal Academy of Higher Education (Deemed University), Manipal. Arunkumar received the first samples and detected the virus.

But India cannot be complacent about its response to other cases of acute encephalitis syndrome or AES--the collective term used for a variety of diseases with related symptoms and various origins, including the Nipah virus--Arunkumar told IndiaSpend.

AES symptoms include an acute onset of fever and a change in mental status, including confusion, disorientation, delirium and coma. The term was first applied to the surveillance of Japanese encephalitis (JE) but now includes a wide range of infectious and non-infectious causes, including viruses, bacteria, fungus, parasites, chemicals and toxins.

In India, 375 million people are at risk of contracting AES. Up to 171 districts in 17 states are endemic to AES. However, in more than 80% of about 10,000 AES cases detected each year, the cause of AES remains unknown.

Not all cases of encephalitis can be diagnosed; globally diagnosis is possible in 50-60% cases, which is more than double of India’s current AES diagnosis rate.

“Nipah outbreak should be a wake-up call for AES surveillance,” said Arunkumar.

The NVBDCP records encephalitis cases as JE or AES with deaths and cases noted for each year.

JE is spread by Culex mosquitoes and most JE infections are asymptomatic--meaning there are no symptoms--but in a few cases, they cause inflammation of the brain and headaches, seizures, fever and disorientation. Mortality rates range from 8% to 30% and the neurological effects in children are often permanent.

About 8-17% of AES cases tested positive for JE, according to an IndiaSpend analysis of data between 2010 and 2017. The NVBDCP categorises JE negative cases as non JE-AES, and no further systematic investigation of causes is attempted.

While the JE virus was identified as the main cause of AES between 1975 and 1999, studies published after 2000 identified the Chandipura and entero-viruses as the most common agents in both outbreaks and surveillance studies, according to a 2012 review of AES studies in India.

“JE prevalence varies geographically; for example around 50% of AES in Assam is JE, while in Uttar Pradesh it may be around 18-20%. When you take India as a whole, it is only 10%,” Arunkumar told IndiaSpend. “All the rest remain undiagnosed.”

While the focus is on children, many AES cases in adults go unnoticed.

“Across the country, in intensive care units of tertiary hospitals, there is at least one patient per week who is admitted with AES-like symptoms but the case is not recorded,” said Arunkumar.

“Many of the diseases clubbed into the ‘basket of AES’ are eminently treatable with specific therapies,” observed a 2017 study that called for “new thinking on AES”.

When a case is categorised as AES, it is presumed to be caused by acute encephalitis, which is viral in origin, without further investigation, and the patient may not receive life-saving treatment.

While an anti-viral drug is available for herpes simplex encephalitis, other cases of viral encephalitis can only be treated with supportive care--to relieve pain, control and prevent complications and improve patient’s comfort.

To identify the cause of AES requires a blood serum test and a spinal tap to examine the cerebrospinal fluid (CSF) for antibodies against specific pathogens. Some organisms can be tested only on blood and others only on CSF; CSF test is considered to be more accurate to diagnose.

As many as 23% AES case records had “illogical entries”, laboratory entries were complete for JE but not AES, and the vaccination history was incomplete, according to a 2013 review of AES surveillance from 2011 to 2012 in Uttar Pradesh’s Kushalnagar district.

The causes of AES could not be established with these data. “Without evidence to estimate the effect of interventions, AES prevention and control measures may be ineffective and public health resources may be wasted,” wrote Manish Kakkar of the Public Health Foundation of India, an advocacy, and lead author of the review.

Uttar Pradesh is one of the worst JE-affected states in India, and outbreaks occur every year during the monsoons.

In 2005, a JE outbreak infected 5,737 and resulted in 1,344 dead. In 2006, the government launched a vaccination programme that reduced incidence, but the number of AES cases remained high.

While the disease patterns of AES changed, the surveillance did not.

Since 2014, scrub typhus, an infection caused by a bacteria called Orientia tsutsugamushi and spread through mites, has been found to be a leading cause of AES in UP. Scrub typhus, in its early stages, causes fever, rashes, headache, body ache and can be easily treated by antibiotic doxycycline.

In 2016, 61% AES cases studied in Gorakhpur tested positive for scrub typhus, according to a study by Indian Council for Medical Research (ICMR).

For decades, scrub typhus diagnosis had not reached the ground, so child after child died.

“The challenges that we face include weak lab diagnostic facilities, which forces doctors to go through guesswork for early diagnosis,” Soumya Swaminathan, director, ICMR, had said in an interview with The Hindu on August 18, 2017.

Now, doxycycline and azithromycin are stocked and prescribed at local health centres.

The problem is not just in Uttar Pradesh or restricted to AES cases, experts said.

So separate agencies collect seperate disease data. For instance, the central TB division collects data on tuberculosis, and the NVBDCP collects data on vector-borne diseases. So disease patterns are rarely analysed together.

Despite an Integrated Disease Surveillance Programme (IDSP), most disease outbreaks in India are first detected by clinicians, who go to independent laboratories for diagnosis and not by the IDSP.

“What India needs is a comprehensive public health surveillance of all important diseases, covering public- and private-sector healthcare institutions,” said John. “Timely reporting” should be received and collated, analysed by a "health protection agency", independent of the healthcare system, he added.

Since 2014, V Ravi, professor of neurovirology, National Institute of Mental Health and Neuroscience (NIMHANS), Bengaluru, has been working to improve AES surveillance in 20 districts of UP, Assam, West Bengal and Karnataka that have 80% AES burden in India.

The project, funded in part by the US Centres for Disease Control and Prevention, hopes to expand capabilities of existing state laboratories so they can diagnose AES.

“We transport the samples thrice a week so the results reach the doctors within 48 to 72 hours,” said Ravi. This has ensured that 43% cases of AES were diagnosed and mortality due to diseases has gone down in BRD Medical College and other district hospitals.

NIMHANS has shared the algorithm for AES detection with the NVBDCP and the ICMR, allowing for more cases to be diagnosed and treated. “It’s up to the government to implement the new algorithm, we are not sure when it will be,” Ravi said.