Mount Abu (Rajasthan): It is an innocuous-looking worm with four black spots near its tail and an inverted ‘Y’ mark on its head, no larger than a matchstick. But when Indian agricultural scientists spotted it in the maize farms of southern Karnataka mid-2018, they panicked.

“The fall armyworm [as the worm is called] is a destructive pest never sighted before in India,” said Sushil K Jalali, a member of that team and principal scientist and head, division of genomic resources, ICAR-National Bureau of Agricultural Insect Resources, Bengaluru. “So when we heard it may have reached maize growing areas in and around Bengaluru, we rushed to investigate.”

The fall armyworm is a native of the Americas. After making its way to Africa in 2016, it now appears to have found a home in India. The voracious pest, known to devastate a 1-acre field in a week, could endanger the agricultural output of not just India but the rest of Asia, particularly China, the world’s second largest producer of maize, if it migrates further east.

The scientists found the larvae of the fall armyworm feeding on maize in every one of the five southern Karnataka districts they surveyed--Chikkaballapur, Hassan, Davanagere, Shivamogga and Chitradurga. In some fields in Chikkaballapur, the pest had affected more than seven in 10 plants, which led to a nationwide pest alert.

Since then, identifying and speedily implementing measures to curtail the spread of the Spodoptera frugiperda, the scientific name of the fall armyworm, has become priority for India’s agricultural scientists.

“The fall armyworm has a huge appetite and is capable of feeding on more than 100 plant species,” said Jalali. “Its favourite foods are maize, millet, sorghum, sugarcane, rice and wheat, while it is also capable of feasting on cowpea, groundnut, potato, soybean and cotton--all important food or cash crops in India. And it has a tendency to spread to new territories fast.”

The crops Jalali named--plus the area under oilseeds, another crop the insect preys on--occupy 82% of India’s farmland, as per the land use records of principal crops in the Agriculture Statistical Year Book 2017. This means it can inflict considerable damage on Indian agriculture if it is allowed to multiply.

The fall armyworm’s widespread occurrence in Karnataka--where maize farmers reported losses in August 2018 (see news reports here and here)--was “likely to be soon followed by spreads to Tamil Nadu and Andhra Pradesh, major regions for hybrid maize seed production in India”: This was a prediction made by the International Institute of Tropical Agriculture (IITA), a not-for-profit generating agricultural innovations for Africa on August 4, 2018.

This has already happened.

Pest threat could spread to rest of Asia

“The fall armyworm has spread to states neighbouring Karnataka in barely one month,” Gopi Ramasamy, country director for India of the Centre for Agriculture and Bioscience International (CABI), told IndiaSpend. CABI is an international not-for-profit that provides scientific expertise to deal with agricultural and environmental problems.

The insect “has not only invaded the maize crop in Maharashtra, the area adjoining the borders of Odisha and Chhattisgarh, West Bengal and Gujarat but also sorghum and other millet crops in Telangana and the northern part of Karnataka”, said Jagdish Jaba, an entomologist with the Theme Integrated Crop Management (Research Program—Asia) at the International Crops Research Institute for the Semi-Arid Tropics (ICRISAT). 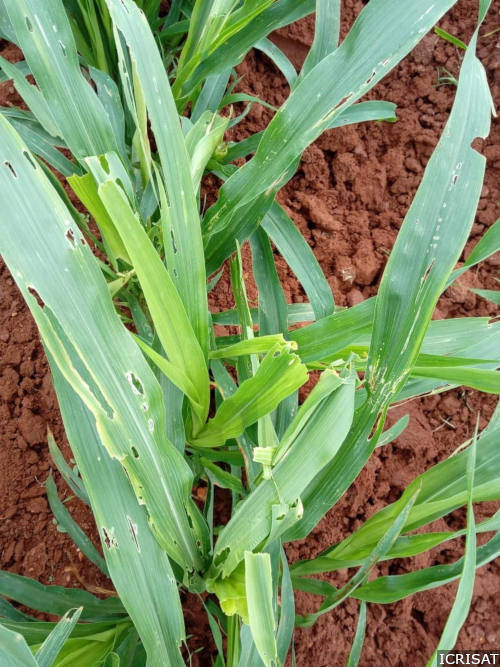 In Africa, the fall armyworm has invaded and cause heavy damages to a one-acre field in just a week. The current India invasion is of concern because the fall armyworm has an appetite for crops occupying 82% of the country’s farmland. If it crosses the border to other South Asian countries, the fall armyworm could “put the maize production of the whole Asian continent seriously at risk with dire economic consequences,” to quote the International Institute of Tropical Agriculture (IITA), a not-for-profit generating agricultural innovations for Africa.

The IITA has also predicted that further expansion of the fall armyworm to Bangladesh, Nepal, Pakistan and other countries “will put the maize production of the whole Asian continent seriously at risk with dire economic consequences”. This spread is “highly likely” due to the “favourable climate” in Asia “with southeast Asia and south China most at risk”, said the Food and Agriculture Organization (FAO).

A fall armyworm invasion in Asia “could have a devastating impact on Asia’s maize and rice producers--mostly small-scale farmers who depend on their crops for food and to make a living”, Kundhavi Kadiresan, FAO assistant director-general and regional representative for Asia and the Pacific, said in an interview to UN News.

From Africa to India, the fall armyworm’s long journey

Samples of the larvae picked by Jalali and his colleagues from maize fields were subjected to DNA sequencing--a scientific test that establishes the order of the four chemical building blocks making up the DNA molecule. “Testing helped match the larvae with species found in Canada and in Costa Rica, essentially in the Americas, the fall armyworm’s native habitat,” Jalali said.

So, how did the fall armyworm make its way to India all the way from the Americas?

Until 2015, the fall armyworm was confined to its native habitat, mostly the tropical regions of the Americas, where it was known to prefer maize but also devoured rice, sorghum, millet, sugarcane, vegetable crops and cotton. In Brazil, the world’s third largest producer of maize, it is considered the most problematic pest to invade that crop.

In early 2016, strains of the Spodoptera frugiperda were first seen in Nigeria, probably having crossed the Atlantic at Florida “as stowaways on commercial aircraft, either in cargo containers or airplane holds, before subsequent widespread dispersal by the wind”, estimated an October 2017 report by CABI, Fall Armyworm: Impacts and Implications for Africa.

With the capacity to travel hundreds of kilometres in a day, the fall armyworm moth, the adult form of the larvae, made its way to 44 sub-Saharan countries--an area exceeding 22 million sq km, equivalent to the combined area of the European Union, Australia and the United States--where it demonstrated a growing appetite for other crops such as millet and sorghum, according to the FAO.

“Our research colleagues in Africa have seen the fall armyworm invade and cause heavy damages to a field in just a week,” said Jaba.

One view on how the pest made its way to India is that the it took the trade and travel route between Africa and Asia. “With the liberalisation of trade, the movement of foodstuffs has considerably increased and this raises the possibility of pests (including the fall armyworm) being carried to new destinations, even across oceans,” P K Chakrabarty, assistant director general, plant protection and biosafety, Indian Council of Agricultural Research, told IndiaSpend.

Another view is that the monsoon weather system may have been carried the insect across the Indian Ocean. “The fact that the insect reached Karnataka at more or less the same time as the monsoon raises the possibility of monsoon winds having brought it over from Africa,” said Mamta Sharma, a theme leader of an Integrated Crop Management Research Program—Asia at ICRISAT.

Once in India, the pest could naturally migrate to new parts in the country and to other parts of Asia over the land route, since it has strong flying abilities, said Ramasamy.

Why India, other nations can expect higher pest activity

The fall armyworm invasion is not the first time a pest from overseas has caused agricultural losses in India. In the five years to 2018, India has experienced two other instances of pest infestation, said Chakrabarty.

Tuta absoluta, or the South American tomato moth--since the 1960s it has caused devastation in that continent--first appeared in tomato-growing districts in Maharashtra and Karnataka in 2014. It caused moderate to severe infestations. Then in 2016, coconut plantations in south India were affected by the rugose spiraling whitefly, an insect native to Central America.

Could global warming be responsible for the acclimatisation of invasive pests to newer geographies? Insects are ectothermic, which means their caloric needs and metabolism depends on the external air temperature. When the climate warms, their metabolic rate accelerates which, in turn, makes them hungrier.

Research has established that global warming will increase the overall pest population and create favourable habitats for them in temperate regions that were earlier too cool for their spread. Scientists at the University of Washington recently modelled the potential losses of staple crops to higher insect activity from global warming. Corn, rice and wheat alone are staples for about 4 billion people worldwide and account for about two-thirds of the food energy intake.

“It appears that under virtually all climate change scenarios, pest populations will be the winners, particularly in highly productive temperate regions, causing real food prices to rise and food-insecure families to suffer,” said co-author Rosamond Naylor, a professor in the Department of Earth System Science at Stanford University and founding director of the Center on Food Security and the Environment, when the study was published.

Globally, about one-fourth of crops are routinely lost to insect pests, pathogens and weeds. India loses roughly 20% of the various crops it produces annually to biotic stresses including insects, pathogens, weeds, rodents, higher vertebrates and so on, said Chakrabarty.

The farm sector is estimated to lose crops worth Rs 90,000 crore annually to pests, weeds and insects, according to this report published in The Hindu. Farmers need to prepare for rising insect pressure to mitigate the impact on the already fragile global food supply, scientists estimate.

India had successfully managed to control the pest invasion of coconut plantations and tomato crops, said Chakrabarty. But the fall armyworm is a formidable pest. Mozambique lost 50% to 60% of its maize crop to this pest and Malawi 10%. Overall, the damage has been pegged at over $13 billion, prompting the FAO to invest $9 million in managing the invasion.

In 2017, CABI predicted that if the fall armyworm spread was not controlled in Africa, the pest could wipe out between 21% and 53% of the annual production of maize, averaged over a three-year period, in 12 maize-producing countries of the continent.

How is India responding to the present outbreak?

“Biopesticides and biological control agents are at the forefront of our efforts to manage the ongoing fall armyworm infestation,” said Chakrabarty.

Regular pesticides are popular but the FAO has warned against “the heavy use of pesticides, which can be harmful for people, their environment and in the longer run”. Instead, it recommends “the use of biopesticides, including those based on bacteria, virus, and fungus, which have been tested, developed, registered and used successfully in the Americas, where the pest has its origin”. 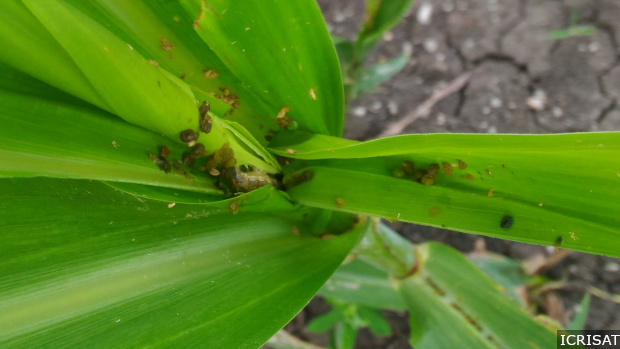 One of the ways to control the population of the fall armyworm is to eliminate the egg mass of the pest from the leaves of affected plants. Farmers are being advised to manually crush egg masses containing a cluster of 150-200 eggs. This photograph shows the egg mass on the finger millet crop.

In India, the Central Insecticide Board and Registration Committee (CIBRC) has declared that botanical pesticides based on neem, pyrethrum and cymbopogon have been found effective against the fall armyworm. But where the infestation is severe, the use of chemical pesticides is also being encouraged, as per ICAR.

However, biological control is a natural approach involving the field release of predators of the invading pests. This is considered essential and effective because migrant pests do not have natural enemies to check their spread in new habitats.

“We have recommended the use of biological control agents like entomopathogenic nematodes, entomophagous fungi like Beauvaria bassiana and Metarhizium anisopliae for larval control, in maize cultivation,” said Chakrabarty.

Other methods include inoculating unaffected crops, baiting the larvae and eliminating the eggs from affected plants. ICRISAT is using (and proposes the use of) recommended insecticides and traps based on pheromones, chemicals that attract living organisms, to capture the adult male moths in huge numbers, thus helping to control the pest population.