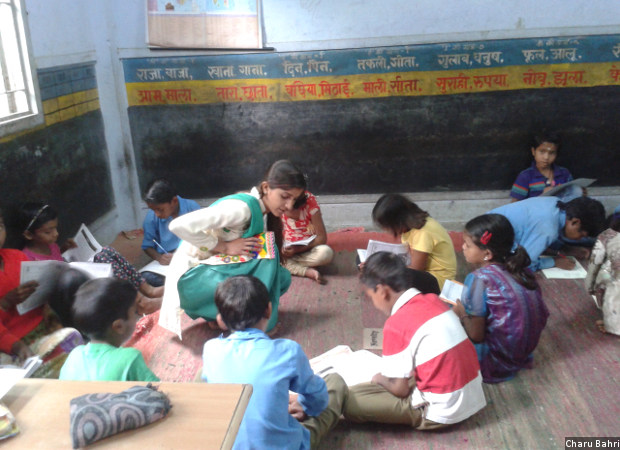 Neeta Rathore, 17, a community volunteer trained in creative learning, designated a Team Balika, implements teaching at the right level in the village Salgaon school, southwest Rajasthan. For maximum learning, class 3, 4 and 5 students are grouped according to their learning level, determined by a test at the start of the intervention, instead of the actual class they are enrolled in.

Salgaon (Sirohi district): In a classroom in the government school here in southwest Rajasthan, about 25 students from standards 3, 4 and 5 standing in a circle, animatedly recited a story spoken by a specially trained volunteer—called a Team Balika (Team Child)—their recitation gradually rising in decibels with every repetition.

Run in government schools by Educate Girls, a nonprofit, the recitation was a prep session for a new style of learning, an attempt to address declining arithmetic and language skills nationwide, despite a Rs 1.2 lakh crore ($17.7 billion) investment in universal education, leaving millions of students ill-prepared for employment.

Instead of the traditional blackboard-and-chalk style of rote learning, the students, like hundreds of others in six Rajasthan districts—Ajmer, Bundi, Jalore, Pali, Rajasamand and Sirohi—learn by pictures instead of words, puzzles that help them find words, alphabet cut-outs they can put together and other uncommon learning aids that whet their appetite to learn.

The programme appears to be working. In 2015, these creative-learning sessions, conducted at least twice weekly during school hours with 79,695 standard 3, 4 and 5 students in 3,399 rural Rajasthan schools, helped record average score increases--irrespective of gender and social background--of 45% in Hindi, 26% in English and 44% in math.

Sitting with other children on a durrie (carpet)--benches and desks are a luxury--Rahul Chauhan, 9, was engrossed in and clearly enjoying a story in his work book, Hathi aur hiran (the elephant and the deer). He explained why. “Because of the pictures and because I like to learn stories to tell [outside of school],” said Chauhan, a broad grin on his face.

After the prep session, students were organised into three groups based on their learning level, which was determined by a test held two months ago at the start of the intervention, instead of by their class. So, a standard 4 student might be in a group with standard 3 students learning to identify alphabets, ensuring that no child is left behind. 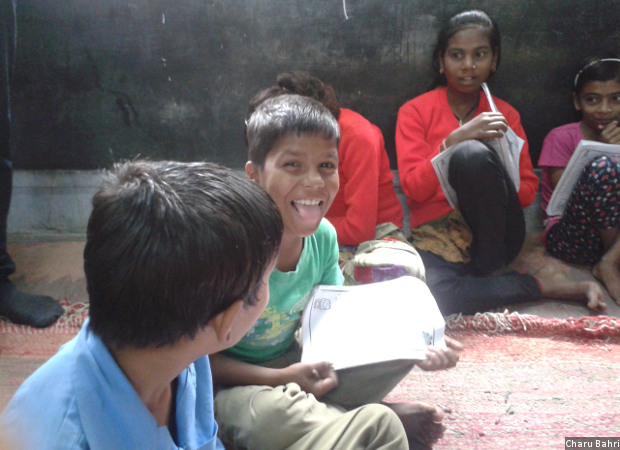 Rahul Chauhan, 9, a class 5 student from village Salgaon, clearly enjoying a new style of learning involving more pictorial representation, less words, word puzzles, alphabet cut outs, and more, used by Educate Girls to whet students' appetite to learn. Pictures and the opportunity to learn stories to tell (outside of school) are what Chauhan said attract him the most.

This strategy, developed in 2005 by Pratham, a nonprofit working towards improving primary education, has been adopted by Educate Girls. It is called “teaching at the right level”.

Teaching at the right level helps weak students catch up, a process vital to schools across rural India, where 52% of class 5 students cannot read a class 2 textbook in Hindi, according to the Annual Status of Education Report 2014 (ASER 2014) by Pratham. Barely one in four class 5 children can read simple sentences in English or subtract double-digit numbers.

For ASER 2014, Pratham met 569,229 children in 16,497 villages. It is not as if the IQ levels of half of the class 5 students and thousands of underachievers in other classes are low. They get a poor start to learning because their parents are illiterate. A cycle of slow learning then plays out: Weak foundations, especially in language comprehension, keep them from understanding their teachers and they fall further back.

India is getting every child in school, but the education they get is failing them

Between 2000 and 2015, India increased its net enrolment rate—a measure of the primary school age children enrolled in either primary or secondary school—from 86% to 99%, thus achieving universal enrolment, according to this 2015 United Nations Educational, Scientific and Cultural Organisation (UNESCO) report.

At least half of all Indian children aged six to 14—about 100 million—are at least two to three years behind their expected math and Hindi and English reading and comprehension skills, Rukmini Banerji, CEO of Pratham, told IndiaSpend.

Essentially, students are being promoted to the next grade without actually learning. “Learning trajectories are flat," said Banerji. "Each additional year in school is not matched by value addition in learning.”

With 66% of India’s primary school students in government schools or government-aided schools, there can be no improvement unless education is transformed here.

Initiatives such as Educate Girls work around primary education shortcomings. Back in the classroom in Salgaon, it was not a school teacher but Neeta Rathore, 17, a community volunteer associated with Educate Girls, who led the children in the recitation and helped them with assignments.

Educate Girls trains both volunteers such as Rathore—whom it designates Team Balikas—and teachers in creative teaching methods, but Salgaon school lacked a trained teacher, reflecting the fact that less than one in five primary school teachers is adequately trained, IndiaSpend reported in May 2015.

The Educate Girls programme, too, is affected by India’s general teaching inability. English improvements, for instance, trail those in maths and Hindi because the language is not spoken in rural Rajasthan. “So, the Team Balika’s own understanding of the language is poor,” said Pallavi Singh, regional manager of Educate Girls.

Rathore, an alumnus of the same school, was eager to be a teacher and enthusiastic about volunteering. While her poor English speaking and comprehension skills were a drawback, there is no one else available.

Of the teachers available, many stay absent or are assigned non-teaching jobs. Almost 24% teachers were absent during random visits to rural schools, found this 2015 study by the University of California, IndiaSpend reported in September 2016.

“We are assigned all sorts of duties, from making election voter lists to counting livestock,” said Dalpat Singh Rathore, a school teacher.

Until August 2016, Ankit Bairwa, 9, from Merma Talab village, in Baran district, southeast Rajasthan, could not recognise letters and numbers above nine. A class 2 student should be able to read simple stories and identify numbers upto 100, according to the curriculum. Bairwa is a class 4 student.

That was when Pratham introduced Merma Talab’s government school to Read India, a 30-day intensive learning camp--now running in 10 Rajasthan districts and 115 more nationwide--to help students strengthen their foundations in math and the official medium of instruction—Hindi in Rajasthan--to better cope with learning.

After 30 days of intensive coaching, Ankit Bairwa could read a short story fluently, recognise numbers till 999 and perform additions and subtractions. 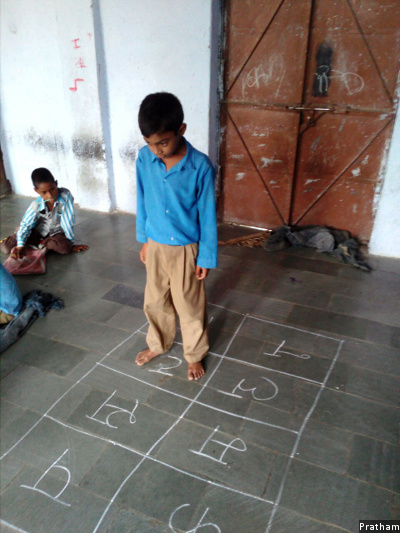 Over 30-days of intensive learning by Pratham, Ankit Bairwa, 9, from Merma Talab village, in district Baran, southeast Rajasthan, learned how to identify numbers from 10 to 999, read a short story fluently, and perform simple additions and subtractions. In catching up with the level of learning expected of him, Bairwa also developed an interest in studies.

“The biggest change from the coaching is his interest in learning,” said Dayaram Bairwa, Ankit’s father, a daily-wage worker, who has studied upto class 8. “I simply don’t have the time to check on him during the day, nor teach him, and his mother has not schooled. Ankit used to play truant from school but now he enjoys studying.”

In bringing Bairwa up to scratch, Pratham has reduced the chances of him dropping out of school.

When children were asked—why did you drop out of school—23% cited lack of interest in studies, according to a 2013 Azim Premji Foundation report, Who Drops Out Of School, based on a study conducted in Yadgir district, Karnataka.

“Students with a weak foundation cannot engage with the teacher and the classroom teaching and as a result, perform poorly, lose interest in studies and look for excuses not to go to school,” said Viplow Shivhare, head of Rajasthan operations, Pratham. “Teachers teaching only the top of the class is a common situation in government schools.”

Innovative learning is good for teachers too. Can it be scaled up across India?

“When students are keen on learning, the teacher’s job becomes easier,” said Khatri. “I have seen how an interest in learning helps teachers, especially those posted in schools in tribal areas, such as Pindwada and Abu Road (both in Rajasthan), where student development levels are low and teacher vacancies are high, putting pressure on the available teachers.”

For the best results, Khatri felt district authorities must get involved with new learning initiatives. Indeed, or possibly own them, as states such as Himachal Pradesh and Jharkhand have done.

Last year, the state of Himachal Pradesh piloted Pratham’s intensive-learning programme in Hamirpur district. Encouraging early results, including 14% improvement in students who could read a text with two or fewer mistakes and 12% improvement in division skills—simple division was considered a problem area for class 5 students despite being taught in class 3—led the state government to own the concept, albeit with some customisation.

“We have increased the length of the learning programme to 45 days and start the day with a two-hour learning session before switching to the regular curriculum,” said Ghanshyam Chand, state project director for Himachal Sarva Shiksha Abhiyan and the Rashtriya Madhyamik Shiksha Abhiyan (National Middle-School Education Programme).

“We have also expanded the scope of the initiative to include assessment of students, to remove any teacher bias from the process and to encourage regular grading,” he said.

“With Program for Result Enhancement, Resource Nurturing and Assessment, as the expanded state government programme has been called, for which Pratham is a technical advisor, we expect to put a stop to primary students being promoted to the next level without imbibing basic language and math skills,” said Chand.