New discharge policy may increase ‘recoveries’, but could lead to new infections

COVID-19 patients with mild and moderate symptoms need not be tested before discharge, according to India’s revised discharge policy for COVID-19 patients. While this reduces the strain on health facilities, the infectiousness of patients after symptoms subside is uncertain, experts warn.

The new policy allows for mild and moderately-ill patients to be discharged from hospital 10 days after onset of symptoms, if there is no fever and no need for oxygen therapy for three days, without testing them before discharge.

Severely-ill patients should test negative once after clinical recovery, as per the new policy.

All categories of patients were earlier required to test negative on two consecutive RT-PCR tests conducted at a 24-hour interval, before they could be discharged. This was based on an April 2 interim guidance from the WHO that said monitoring of a confirmed patient could stop if two negative tests are recorded “more than 24 hours apart”. 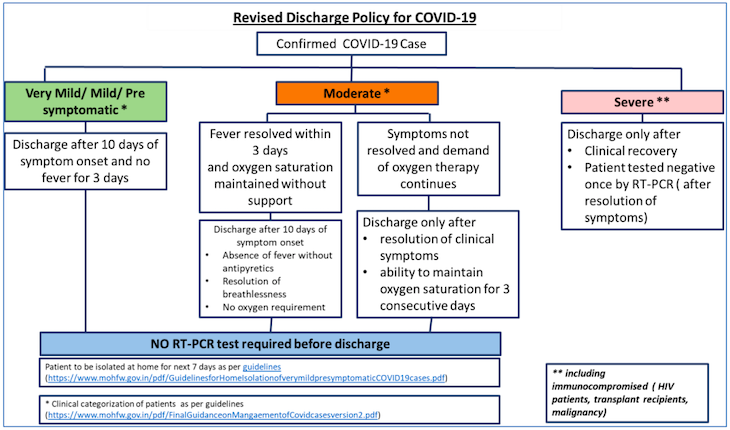 “Available evidence does not indicate any increase in the risk of transmission from patients discharged based on the revised discharge criteria,” the health ministry said in a list of FAQs released on May 10. The revised criterion specifies that such patients “will follow home isolation for a further seven days”.

Several countries have changed the criteria for discharge from ‘test based strategy’ to ‘symptom based strategy’ or ‘time based strategy’, the FAQs said. “A review of ICMR [Indian Council of Medical Research] laboratory surveillance data also indicated that after initial rt-PCR positive results, patients became negative after a median duration of 10 days,” it said. (Read our explainer on RT-PCR testing here.)

Meanwhile, the number of cases reported daily has reached an all-time high during this period, with six of the seven days reporting more than 3,000 cases, and the highest reported on May 11, at 4,213.

It is anticipated that with the new discharge policy more “recoveries” may be reported, without patients being tested at the time of discharge, experts said. It is incorrect to presume that people can and will self-isolate at home, said Anant Bhan, a researcher in global health, bioethics and health policy, because experience has shown that is frequently not the case in India.

“It seems to be an effort to preserve testing kits, and then hoping that people will remain in isolation,” Bhan told IndiaSpend, “I do not see any other reason to not test.”

India has tested (RT-PCR) more than 1.6 million samples as on May 11, 2020, with 64,651 tests conducted on May 11. The ICMR has not shared the number of positive samples, tests per day, or number of individuals tested for COVID-19, since April 25. The US, which has the most cases worldwide, has tested more than 8.9 million samples. India has consistently tested fewer people per million than other countries reporting high numbers of cases.

“The issue that needs to be addressed is that in some cases, patients may continue to shed the virus after 10 days, and then how much are we able to ensure that they are able to observe strict home isolation,” Bhan said. Patients may let their guard down during home isolation and may infect close contacts. Moreover, home isolation could be difficult for those with large families or living in areas with high population density, in which case a dedicated facility may be required, he added.

Previous March 17 guidelines from the ministry had said that in hospitalised patients with confirmed COVID-19 infection, “repeat URT [upper respiratory tract] samples should be collected to demonstrate viral clearance”. The frequency of specimen collection would depend on local circumstances but “should be done at least every two to four days until there are two consecutive negative results (of URT samples) in a clinically recovered patient at least 24 hours apart”, the guidelines had said.

If India were to follow the earlier protocol of testing a hospitalised patient twice before discharge, it would need to conduct at least 88,058 tests for the 44,029 active patients as on May 11. This would be in addition to thousands of tests needed to find new cases--from which the record high number of 4,213 new cases were detected that day (64,651 tests were conducted to find new cases, based on IndiaSpend estimation.)

A March 17 discharge policy of the health ministry, sourced from the World Health Organization (WHO), said that a patient could be discharged after a “chest radiograph has cleared and two specimens turn negative within 24 hours”. 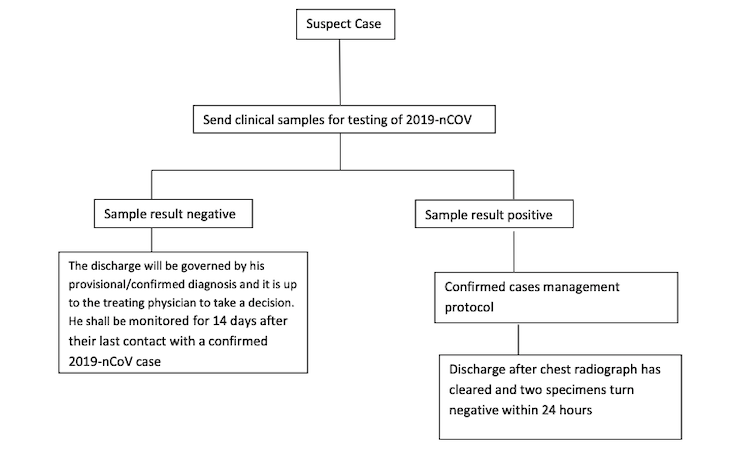 The revised discharge policy is a “good decision” because there is “a huge influx of passengers now and cases will increase”, Nandini C.S., deputy district medical officer and the district surveillance officer in Pathanamthitta in Kerala, said. Kerala is bringing in at least 300,000 migrants from West Asia and the Gulf.

Under such circumstances, “this criteria is better, and only symptomatic cases should be sent to COVID hospitals,” she said. “If there were only a few cases, we can manage it in a hospital.”

Other countries doing the same, but conditions vastly different

In the US, as per April 30 discharge policy, patients with lab-confirmed COVID-19 who have not had any symptoms can be discharged if 10 days have passed since the date of their first positive COVID-19 diagnostic test, if they have not subsequently developed symptoms, or if they have had negative results from at least two consecutive respiratory specimens collected more than or 24 hours apart (total of two negative specimens).

In Europe, as on April 8, the European Centre for Disease Prevention and Control’s technical report said confirmed COVID-19 patients who have never been hospitalised due to mild or no symptoms could end self-isolation eight days after the onset of symptoms and resolution of fever with improvement of other symptoms for at least for three days. It asked for “two negative RT-PCR tests from respiratory specimens at 24 hours interval, at least eight days after onset of symptoms” for hospitalised patients, “[i]f testing capacity allows”.

While each country has to chart its own course, “one test is better than no test”, said Bhan.

While states will be able to discharge more patients based on the new policy, throat swabs of people with mild COVID-19 infections can test positive for days and, in some cases, weeks after their illness, studies have found.

In a study of 16 patients in Beijing, China, the sputum of half of the patients remained positive, even up to eight days after the resolution of symptoms, according to a non-peer-reviewed paper published in The American Journal of Respiratory and Critical Care Medicine on March 23, 2020, by researchers from China’s PLA General Hospital and Yale University in the US.

Another study of nine German patients, with mild COVID-19 symptoms, had similar findings, as per another pre-review paper published in the journal medRxiv on March 8, 2020. To understand if patients recovering from the COVID-19 infection can infect others after their symptoms, scientists tried to grow viruses from the sputum, stool, blood and urine of these patients. While they could grow the virus from the sputum samples collected during the first week of symptoms, they could not grow the virus from the samples taken after day eight after diagnosis, in spite of a high viral load, the German study found. The virus could not be grown in samples taken from the urine and blood, which the study said implied that these patients were unlikely to be infectious.

If the global evidence had said that generally a patient is not infectious after 10 days, India could follow it, but doubts linger that some people could be infectious for longer, said Bhan. “Unless we have our own evidence which indicates that 10 days is adequate based on the experience of testing many patients so far, and we are basing the current decision on that evidence (based on preserving data for all patients across the country after admission/testing prior to discharge), there will be some uncertainty,” he said.

In Mizoram, the state’s only COVID-19 patient was discharged after 46 days on May 10, as per health ministry data, presumably because they took that long to test negative in two consecutive tests done at 24-hour intervals.

Similarly, in Kerala, a 62-year-old woman who had been under treatment for COVID-19 for 42 days in Pathanamthitta, finally tested negative, OnManorama reported on April 22. She had been tested 22 times, the report added. “In the case of the patient who was admitted for more than 40 days, we had to take a sample every alternate day which was difficult. So this change [in policy] is good in my opinion,” said Nandini.

In the high-profile case of singer Kanika Kapoor, she tested negative on her fifth test.

One way of controlling the possibility of a discharged patient infecting others “is to have a longer isolation period in a dedicated care facility”, but this may have “a cost implication, particularly in a public sector facility. It might be cheaper to test patients”, said Bhan.

(Paliath is an analyst at IndiaSpend. Bhasker Tripathi and Sadhika Tiwari provided inputs for this story.)