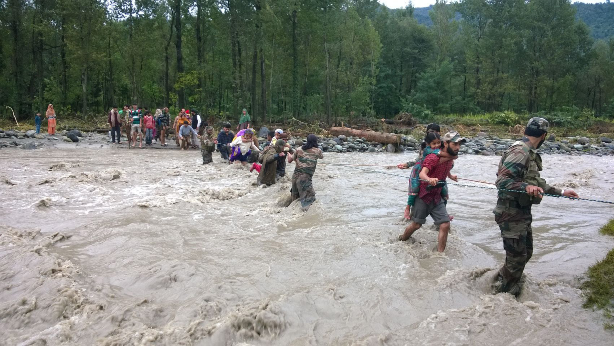 As scientists ponder future trends at the Lima Climate Change Conference, which ends on 12 December, 2014, an international team has warned of more frequent and worse floods in the Brahmaputra and theIndus.

In a warming globe, a wetter Himalaya could increase the flow of rivers originating there, changing flood patterns in their drainage areas (basins) in India and elsewhere.

"There are some indications that the downstream part of Brahmaputra basin, e.g., Assam, might experience more frequent and stronger flood events in the future," said Arun Bhakta Shrestha, Regional Programme Manager, River Basins, at the International Centre for Integrated Mountain Development (ICIMOD) at Kathmandu. Shrestha draws from unpublished research of ICIMOD's Himalayan Climate Change Adaptation Programme (HICAP). "We studied the Brahmaputra basin to see the impacts of climate change on the hydrological regime," Shrestha adds.

Future changes are expected in the discharge, which is the water coursing through a measuring point at a given time, of the Indus river as well.

"A recent study for the Upper Indus basin indicates that increases in extreme river discharges are very likely in the coming decades," said Shrestha's colleague Arthur Lutz, who works with the consultancy FutureWater, and is a researcher at Utrecht University in the Netherlands.

The recurrent theme in such studies is how global warming leads to more rain and snowmelt in the upper catchment, the upstream areas drained by the great Himalayan rivers. Extreme rain downstream worsens floods.

Flowing from what is called the "Water Tower of Asia", these rivers are all about superlatives.

In its 2,897-km course from a glacier at an altitude of 17,093 feet, the Brahmaputra, for instance, flows through the world's deepest valley, around the largest riverine island and through some of the wettest places on earth, before joining the Ganges and then the Meghna, weaving a mesh through the world's largest delta, before meeting the Bay of Bengal.

The Brahmaputra is 9.7 km wide and 120 feet deep at some places, has the world's largest average flow rate, equivalent to 100,000 bath tubs – 15.1 million litres – being flushed out in a second. When it floods, the figure could grow four-fold or more.

The catchment of the Ganges-Brahmaputra-Meghna system is one of the largest in the world, spreads across the great Gangetic plain of northern India and southern Nepal and the Nepalese Himalayas. The Brahmaputra basin extends northwards through Assam and Bhutan, then westward between the Himalayas and the Tibet Plateau. Precipitation, or water that comes down or forms as rain, snow, sleet, or hail in this vast area, could influence the river flow.

The new projection of floods comes as a follow up to a paper that Lutz, Shrestha and colleagues published in Nature earlier this year. This paper projected more runoff – all the water that comes – into five great Himalayan rivers as precipitation increases in upstream mountains of Indus (Sindhu), Ganges (Ganga), Brahmaputra, Salween and Mekong.

For this Nature paper, Lutz, Walter Immerzeel, and Marc Bierkens of Utrecht and Shrestha made high-resolution computer models that represents how snow and water form, fall, flow freeze and evaporate in the upstream area of these rivers.

The team analysed the impacts of climate change on future availability water in these river basins using what scientists call a "climate model ensemble". Climate models use numbers to simulate how the atmosphere, oceans, land surface, and ice interact with one another and impact the climate system. They use these data to project future scenarios. An ensemble involves a large set of copies of a system, each slightly different, showing a range of plausible climate responses to factors ­that "force" the climate system to change. These factors could be natural or human-made, such as solar radiation or the presence of dust and soot, in the air.

The team found differences between the river basins and even between tributaries within each basin, but overall projection shows an increase in runoff till 2050. That is due to an increase in the precipitation in the Upper Salween, Ganges, Brahmaputra and Mekong basins and more snowmelt in the upper Indus basin.

The problem with forecasts

Distant scenarios, however, are uncertain.

Until 2050, the overall glacier melt will increase even when glaciers might shrink due to increased temperatures. For the Indus basin, some models predict an increase in precipitation, but others show a decrease. As for the other four rivers, all models generally agree that precipitation will increase.

Other scientists have earlier noticed that extreme rain events are also on the rise in the Himalayas, and elsewhere in India. In a 2009 paper, Shouraseni Sen Roy at the Department of Geography and Regional Studies of Miami University analysed hourly precipitation data from 1980 to 2002 across India.

Sen Roy used a set of 16 indices, including frequency of rainfall greater that 20 mm in one hour and seasonal hourly maximum amount for each year and made a composite index to understand patterns of intense rain over short periods of time. Overall positive trends were observed across India during the dry-summer and wet-summer monsoon season. This trend, was reversed in the winter.

However, during every season, the north-western Himalaya and northern parts of the Indo-Gangetic basin along the foothills of the Himalaya showed increasing trends in extreme precipitation.

These patterns were similar to findings from earlier studies that analysed daily heavy precipitation across the subcontinent during the monsoon. One such study (in 2008) linked increasing trends of extreme rainfall events in the last five decades with a rising trend of India Ocean sea-surface temperatures and the flow of heat from its surface into the atmosphere.

A flutter in Hawai, a flood in the Himalayas

Now, common sense dictates that increased precipitation could cause more riverine floods. But the trends are hard to predict. The available instrumental records of stations that measure water level and flow are limited across space and time, and changes in land use and structures make such predictions even more difficult.

As Peter J. Webster, professor at the school of School of Earth and Atmospheric Sciences, at Georgia Institute of Technology, Atlanta, noted in a paper it is not just the sea-surface temperature of the Indian Ocean that influences flow of these rivers but also faraway oceans.

Seasonal discharges of the Ganges have been found to be connected with the phase of the El Niño–Southern Oscillation (ENSO). ENSO is a disruption of the ocean-atmosphere system in the tropical Pacific; it influences global weather and climate and affects all the rainfall over India. Summer flows in the Brahmaputra show a relationship with sea-surface temperature in the Indian Ocean as well as Northwest Pacific and snow depth during the previous spring.

With complex global connections and wide local impacts, scientists have called for a deeper understanding the Himalayan ecosystem, its sensitivity to climate change, and better disaster preparedness. As Rajeevan puts it in the India Disasters Report II: "…realtime forecasts and warnings of extreme weather must be disseminated rapidly in the most efficient way".

and climate. He can be contacted at mm584@sussex.ac.uk)