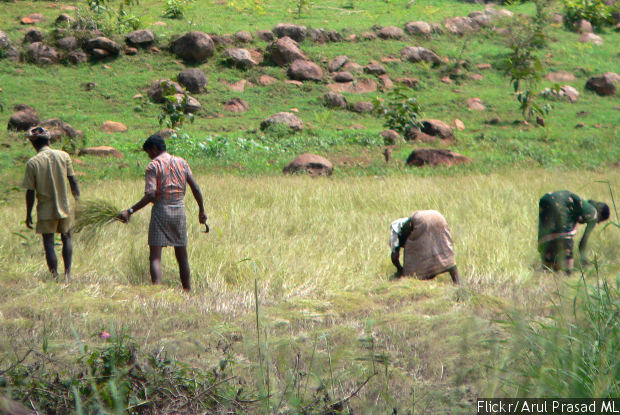 The Tamil Nadu government declared a drought on January 10, 2017, after 144 farmers ended their lives (according to media reports here and here) between October and December, 2016. As many as 106 farmers were reported to have committed suicide in one month, according to this notice issued by the National Human Rights Commission to the state government on January 5, 2017.

The retreating northeast monsoon—usually unnoticed in India owing to the singular importance of the larger southwest monsoon—in 2016 was the worst ever over the last 140 years, according to Indian Meteorological Department (IMD) records, since 1876.

“Tamil Nadu celebrates Pongal on January the 16th,” said Panneerselvam. “It is when the harvest begins, but the yield this time is going to be the worst the state will see.”

On January 5, 2017, reservoirs in Tamil Nadu were at less than 20% of their capacity, cited as the worst ever for the state.

Record-keeping began in 1871, but a worse northeast monsoon, which sweeps across Tamil Nadu, coastal Andhra Pradesh, south interior Karnataka and Kerala, between October and December, was recorded in 1876, making 2016 the year of the second-worst monsoon in 145 years.

Overall, the northeast monsoon was 45% short of the average for this period, the state worst hit being Tamil Nadu, where rainfall for the season was 62% short of normal. Although the southwest monsoon--which waters the subcontinent between June and September--was classified as normal across India (3% below average), it was 19% deficient in Tamil Nadu.

Hit by shortages from both monsoons, Tamil Nadu, where the winter crop depends more on the northeast monsoon than in any other Indian state, reported a 33% drop in the winter sowing of rice, according to latest crop sowing situation report, updated weekly by the agriculture ministry.

More than 60% deficit in October-December rains in four states

The northeast monsoon becomes active after the southwest monsoon retreats from the subcontinent. While there is no specific date for the retreat of southwest and the onset of northeast monsoon, October is regarded as the starting period of the lesser monsoon. 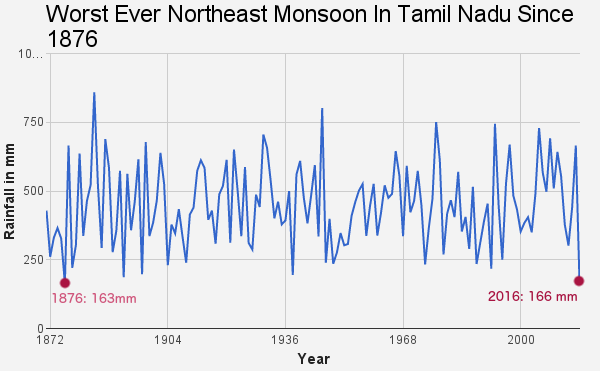 Nagapattinam, Thiruvarur and Thanjavur were the worst hit districts in Tamil Nadu.

“There are 135,000 paddy farmers among the 175,000 lakh farmers in our district, Nagapattinam, which falls in the Cauvery delta. Half the farmers have sown the paddy crop, but less than 20% of the crop has crossed the flowering stage,” said J. Sekar, joint director of the agriculture department in the eastern coastal district of Nagapattinam. “Even this mature crop will yield nothing.”

“Under the Pradhan Mantri Fasal Bima Yojana (prime minister’s crop insurance scheme), about 130,000 (95%) paddy farmers in the district are insured,” said Sekhar. His claim could not be independently verified. “A premium of about Rs 11 crore has been collected. This will provide a safety net to our farmers.”

The failure of the northeast monsoon was evident across the South except Telangana, where farming is mostly rain-fed and dependent on the southwest monsoon.

With the northeast monsoon failing and the southwest sketchy, reservoirs in the southern states are in crisis--or nearing one.

Karnataka declared a drought in 22 districts and some additional talukas in October 2016; the state has received Rs 1,782 crore from the central government. All of Kerala has been declared drought hit.

As 2016 ended, South India’s combined reservoir levels were 34% of capacity, which is 22 percentage points less than 56%, the average water availability over the last 10 years.

In Tamil Nadu, a third of fields not sown

Tamil Nadu had targeted 14.5 lakh hectares under rice in 2016-17, according to the weekly sowing situation report dated January 6, 2017, of the agriculture ministry, more than any other state. But no more than 7.18 lakh hectares had been sown until January 5, 2017, which is 3.5 lakh hectares—or 33%--less than the five-year sowing average of 10.68 lakh hectares.

The lede of this story has been modified to update the death toll.