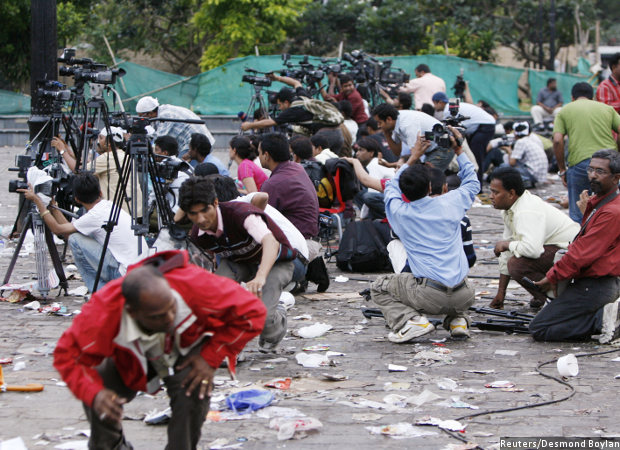 When Karun Misra did die--shot at close range while riding a motorcycle on his way home--it was a shock to his family. He left behind a wife, Payal, and two young children, including a 15-day old newborn. But Karun, a journalist in Uttar Pradesh’s Ambedkarnagar district, was aware his life was in danger, a friend, Manish Tiwari, told IndiaSpend.

From all accounts a driven, idealistic man, Karun, 32, had written stories about a particularly dangerous business--illegal mining. Mafia hit-men first came for Karun after he refused bribes and ignored threats, said the friend. On February 5, “he got information that something was going to happen to him on either the 11th or 12th of February”, said the friend.

A day later, Karun was dead, the fifth journalist murdered in India’s most populous state since March 2015, accounting for half the 10 killed nationwide, according to data independently compiled by The Hoot, a media watchdog, and IndiaSpend. Reporters Without Borders (RSF), a global advocacy, called India “Asia’s deadliest country for media personnel, ahead of both Pakistan and Afghanistan”. Committee to Protect Journalists (CPJ) affirms this statement with their compilation of data showing that for the year of 2015, there were only two deaths of journalists in Pakistan and no deaths in Afghanistan.

Karun’s case is unique because the mastermind behind his murder and the main shooter were arrested. This is rare. As many as 24 journalists were murdered for work-related reasons in India since 1992, Committee to Protect Journalists (CPJ) data reveal. But 96% of the cases are unsolved, ranking India 14th globally for impunity in murder cases against journalists, according to the CPJ impunity index.

“Indian journalists daring to cover organised crime and its links with politicians have been exposed to a surge in violence, especially violence of criminal origin, since the start of 2015,” Reporters Without Borders states. Illegal mining for a variety of sand and minerals--particularly sand for the construction industry--is a crime that is in growing evidence across India.

Two murders monitored by RSF (in 2015) were linked to illegal mining, “a sensitive environmental subject in India”, an RSF report released in 2015 said. RSF’s data are estimates of murders confirmed as work-related; there are four more awaiting confirmation.

“He didn’t like to do stories and leave them just like that,” said another friend of Karun, Anil Dwevedi. “He wanted a result from it... He was soldier-like, he would not call police and say ‘something is happening’ and they should go there.”

When Dwevedi met him four days before he was killed, Karun, a reporter with Jansandesh, a Hindi daily, confessed, “There is some danger, some difficulties... but I have to fight.”

His fight was against a powerful, illegal industry that is steadily expanding despite a new law, promulgated in January 2015, that allows for five years imprisonment and a fine of Rs 500,000 per hectare of land mined illegally.

But illegal mining has steadily increased over the last six years (except for a dip in 2013-14), as this government statement to the Rajya Sabha (the upper house of Parliament) revealed. In UP, where his investigation of illegal mining cost Karun his life, cases registered almost doubled over a decade.

With illegal mining embedded in UP’s economy and politics, Karun's friends and family pointed out that despite arrests, illegal mining in their area has not stopped.

“The reason for which Karun was killed is still going on,” said one of the two friends we spoke to. “Police are not doing what they can to stop the illegal mining business… it’s still going on.”

For Karun's brother, Varun Misra, the shock endures. He has not forgotten how Karun did not answer his phone when he called on February 13. At 11 pm, he received a call from an uncle. “[My uncle] told me Karun was dead. I was so shocked. I could not believe it.”

46% of Indian journalists killed on duty were covering politics

Since 1992, only 3% of journalists in India have died covering wars, according to CPJ data, and as many as 46% of journalists who were killed while working were covering politics; 35% corruption.

India is not alone in this trend, reported RSF: “Two thirds of the journalists killed worldwide in 2014 were killed in war zones. In 2015, it was the exact opposite. Two thirds were killed in countries at peace.”

Death is not the only cause for concern for the Indian journalist. “Human rights defenders, journalists and protesters continued to face arbitrary arrests and detentions. Over 3,200 people were being held in January [2015] under administrative detention on executive orders without charge or trial,” the latest Amnesty International report states.

Journalists face hostile environments across the world: 71 were killed with confirmed motives, with another 25 unconfirmed, according to CPJ’s statistics. RSF records that 43 journalists have been killed for unclear reasons.

Karun’s brother, Varun, said crimes were getting “bigger and criminals bolder” and this is why punishment was important. “This can happen with anyone anywhere,” he said. “My only appeal to the authorities is a speedy trial and severe punishment. Death is inevitable but nobody deserves to die like this.”

(Campbell is a graduate in Film and Media from Otago University, New Zealand.)

Correction: We wrongly stated the name of Karun Misra's friend. It is Anil Dwevedi.