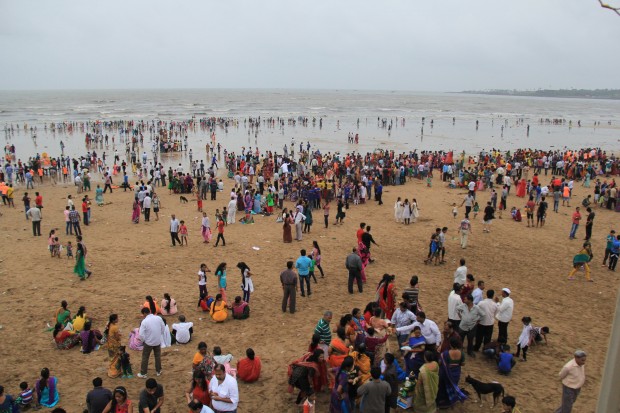 Yet, every year, its treasury remains largely unused, leaving Mumbaikars frustrated with the city’s unending chaos and ponderous pace of development.

Capital expenditure is about 25-30% of the corporation’s budget, MCGM records reveal. Establishment and administration expenses, which include the payment of salaries for civic employees, are estimated to take up 52% of the total budget, as IndiaSpend has previously reported.

Mumbai’s under-investment in public works is reflected in inadequate availability of civic amenities such as water supply, sewerage, transportation networks and stormwater-drainage system. While the share of capital expenditure has been higher than the Indian average, data up to 2012-2013 show that Rs 23,327.27 crore or 39.5% of this provision has been actually spent collectively since 2004-2005.

In these estimates, on average, roads, storm water drains and solid waste management account for about 50% of the capital expenditure, while water and sewerage take up roughly 30%. Other spending priorities include an average 8.2% for public healthcare and infrastructure, and an annual share of 2% to 4% for upgrading fire brigade and disaster management services.

This is particularly poor planning and execution because the BMC budget is largely built on its own funds. The corporation depends on grants and loans for just 10% of its budget. Over 70 per cent of its funds are generated through revenue income and receipts, of which property tax and octroi are the biggest draws, accounting for more than half of the corporation’s earnings.

Jairaj Phatak, former municipal commissioner (May 2007 – October 2009) defended the corporation’s track record. “Delays in capital expenditure cannot be blamed on the deliberative or administrative wings of the corporation. Capital-intensive mega projects undertaken by the municipal corporation seem to face the same problems they would if executed by a state or central government agency,” Phatak told IndiaSpend.

“They cannot proceed at the desired pace if it is found that the bids received on the work tenders are unsuitable or if land clearances or permissions from other state or central government bodies, such as the Ministry of Environment and Forests, are pending. Delays in the deliberative process may at the most minorly affect smaller short-term projects.”

Phatak said in general smaller projects at the ward-level were executed faster, as opposed to capital-heavy projects for the city such as the Rs 3,900 crore Brihanmumbai Storm Water Drains (BRIMSTOWAD) project.

“It would be easier to view these smaller projects together with those executed at the local panchayat level in the rural sector where consumption of the budget is definitely quicker,” said Phatak.

However in the corridors of the MCGM, as the new state government takes its time to take shape, civic officials admitted that the uncertain political climate (there is talk of a possible Shiv Sena-BJP split in the corporation) has also affected the civic body.

Policy decisions on parking, open spaces and licences, among others, have been pending for more than eight months now because of the Lok Sabha and state assembly elections, said a civic official, speaking on condition of anonymity.

“Political parties don’t want to make controversial decisions in the sensitive polling climate but by playing safe, the corporation is delaying on important issues which will require budgeting in the coming year,” said the official. “The heads of various deliberative committees need to be proactive, inexperienced leaders tend to hold back on approvals, and this keeps the administrative engine from running uninterruptedly, ultimately affecting civic services.”

For India’s financial capital, these explanations change nothing.

(Alison is a journalist based in Mumbai. She can be reached on alison.saldanha@gmail.com)