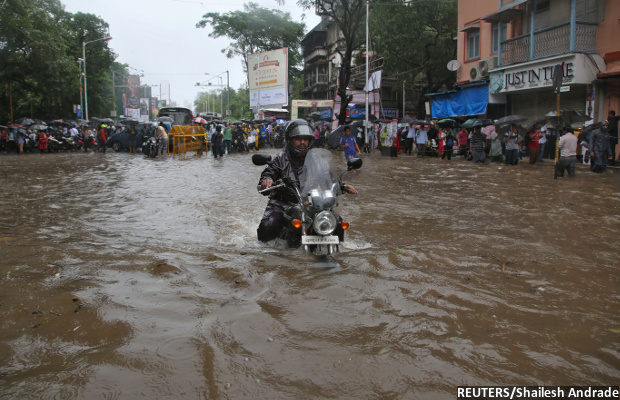 A man rides his motorbike through a water-logged road during rains in Mumbai on August 29, 2017.

Mumbai: As parts of India’s financial capital went under after more than 200 mm rainfall--the equivalent of 11 days of average daily monsoon rainfall in 12 hours--on August 29, 2017, the deluge mirrored similar scenes in other cities this month, a consequence of increased concretisation and increasingly variable rainfall patterns, according to various studies.

As of 8.30 am on August 30, 2017, Santa Cruz in suburban Mumbai received 304 mm rainfall over the preceding 24 hours, Andheri 297 mm, Worli on the city’s western seaboard had received 289 mm, Borivali 211 mm and Byculla 227 mm, according to data from the Brihanmumbai Municipal Corporation.

Typhoon-like weather.Cancelling my flight to Delhi for an Indo Australian meeting.Telling my Aussie friends I'm 'Down Under' water in Mumbai pic.twitter.com/1LBZJBr1Um

This is how Bandra West looked around 5 pm today. Guys please stay indoors till it's absolutely urgent #besafe #MumbaiRain pic.twitter.com/r43GPOjJzk

The rain came down in Mumbai much as it had in Chandigarh on the morning of August 21, 2017. By afternoon, the joint capital of Punjab and Haryana had received 112 mm of rainfall, 23 times the city’s average daily monsoon rainfall. Similarly, on August 15, Bengaluru received 37 times, and on August 11-12 Agartala received more than 11 times its average daily monsoon rainfall of the last five years.

In Chandigarh, a city of 1 million, commuters found it difficult to reach their destinations, and some had to abandon their cars and motorbikes on the roads. Many vehicles floated in the water--a reminder of similar images from Chennai during the November-December 2015 floods. Water entered buildings, and the urban administration of the country’s best-planned city descended into chaos.

Independence Day 2017 was unusually wet and waterlogged for Bengaluru. Heavy rains started around midnight, and by morning, 128 mm of rain had cascaded down on the city of 9 million. Localities in and around Koramangala in the southern part of the city went under water, with parked vehicles nearly submerging.

On August 11 and 12, 2017, a heavy downpour drowned Agartala, the capital of Tripura in northeastern India. While the city of 438,000 received 102 mm of rainfall in one day, on the next there was 94 mm, and 196 mm in two days was more than the city could take. The city’s systems collapsed, and normal life was disrupted.

On July 26-27, 2017, the downpour was in Ahmedabad, where within 24 hours the city of 5.5 million received 200 mm of rainfall. To make matters worse, due to heavy rainfall in the upper part of the Sabarmati river catchment, the authorities had to release water from the Dharoi dam. With the river hemmed in by perpendicular, concrete riverbanks as it flowed through Ahmedabad, there were serious threats of heavy flooding, and the administration reportedly evacuated more than 10,000 people.

Increased rainfall intensity in a time of climate change

“Though it is difficult to attribute any one event to climate change, there is much research results from across the world that is showing that the pattern of multiple extreme events in a season is happening due to the changing climate,” Mujumdar told indiaclimatedialogue.net, a website dedicated to climate-change reportage.

Chennai had a series of five “extreme precipitation events”, in scientific parlance, between November 8 and December 4, 2015. Before the city could recover from one event, it was battered by the next. The climax was the release of water from the Chembarambakkam reservoir upstream of the city, causing the Adayar river to jump its banks in Chennai.

The secondary runway of the Chennai airport, built over the Adayar river, was flooded and airport services were paralysed for days. To evacuate those who wanted to leave the city and were stuck at the airport, the Indian Navy helped operate civilian flights from the naval air base at nearby Arkonam.

ICWaR has been studying the urban flooding events in Chennai, Hyderabad and Bengaluru in recent years. For Bengaluru, the team compared 26 general circulation models (or global climate models) along four “representative concentration pathways”--greenhouse gas emission scenarios up to year 2100, used by the Fifth Assessment Report of the Intergovernmental Panel on Climate Change (IPCC). The conclusion: Climate change projections clearly indicate an increase in high-intensity rainfall.

Rainfall Intensity In Chennai During The December 2015 Floods 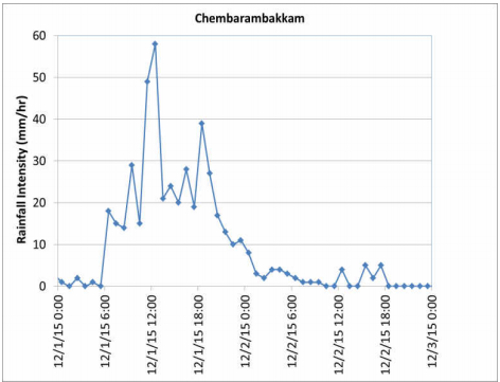 Another report, published by the Ashoka Trust for Research in Ecology and the Environment (ATREE), Bengaluru, confirms similar findings: Rain events greater than 100 mm have increased in number in the past 100 years, researchers Jagdish Krishnaswamy and Srinivasan Vaidyanathan wrote. There is an overall increasing trend of events exceeding 100, 150 and 200 mm since the 1900s. But there is an increasing variability in recent decades.

However, attributing a single event to climate change remains problematic.

It was not possible to attribute the extreme rainfall in Chennai on December 1, 2015, to climate change, a team of researchers from the Indian Institute of Technology, Delhi, and the University of Oxford in the UK, said in a 2016 study.

Taken by surprise, cities struggle to predict rainfall intensity and its impact

It is this variability in rainfall that takes cities by surprise. Professional weather watchers of the India Meteorological Department and private individuals and agencies are able to say that it is going to rain over a particular city, but they cannot foresee its intensity and impact.

To improve prediction, global climate models developed by the IPCC need to be reconstructed for cities, said scientists.

Extreme rainfall also leaves cities at greater economic risk. The economic loss to Chennai from the flood of 2015 was estimated to be $3.5 billion (Rs 21,381 crore), according to annual estimates compiled by global reinsurance major Munich Re.

If extreme rainfall events become more frequent, cities need to be prepared for extreme flooding. They do not appear to be.

Why cities are not prepared for extreme rainfall

In Bengaluru, storm water networks are either blocked or not adequate, according to Veena Srinivasan, fellow at ATREE. Many of these drains also carry sewage, which should be separated and treated. With sewage mixing with stormwater, it is difficult to channel the excess rain water into local lakes. 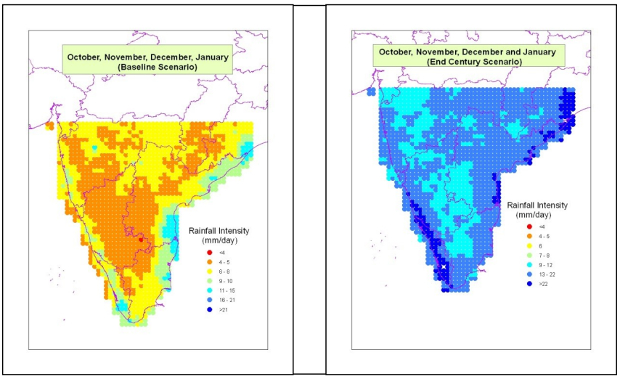 Garbage also finds its way into and obstructs stormwater drains, floating out when they overflow.

Changing urban land use disallows water from soaking into the ground. “In normal grounds outside the city, nearly 80% of the rain is absorbed,” G K Bhat, chairman of Ahmedabad-based Taru Leading Edge, a development think tank, told indiaclimatedialogue.net. “Today, with concrete and tarmac all around, we are creating almost a near-total impervious area. Thus, the flood gets amplified in urban areas because of change in land use.”

While the July 2017 flood in Ahmedabad was not the most severe in the city’s history, it had a greater impact than in the past because of growing concretisation of open land.

In Chennai, the release of water from the Chembarambakkam reservoir upstream of the Adayar river on December 1, 2015, was thought to have triggered floods along the river. However, later studies proved that the reservoir water only added to water flowing in from the southwestern suburbs of the city beyond Tambaram.

“The main flow in the Adayar river was coming from these suburbs, and the Chembarambakkam flow only added to this,” Balaji Narasimhan, associate professor at the Indian Institute of Technology, Madras, told indiaclimatedialogue.net. “In future, when these suburbs have more buildings and roads, the amplification of the flood could be even higher.”

Existing infrastructure is inadequate and prone to collapse

With the exception of planned cities, such as Chandigarh, and industrial townships, such as Bhilai and Jamshedpur, most Indian cities grow organically from a cluster of villages and small towns. Cities grow without adequate infrastructure, and whatever exists is inadequate for extreme rainfall.

“The existing infrastructure collapses quickly because it is designed for minor floods and not the kind of extreme events that we are seeing in the recent years,” said Bhat. “Even though guidelines have been laid out by the National Disaster Management Authority, urban planners and managers go for designs calibrated for milder events to reduce cost.”

Ironically, when Chennai flooded in 2015, it was the stormwater infrastructure laid down by the British more than a century ago in the older parts of the city that withstood the brunt better than drains installed in the newer parts of the city.

Without redesigning their infrastructure and preparing for extreme weather, India’s cities will increasingly succumb to its ravages.

A version of this story first appeared here on indiaclimatedialogue.net.