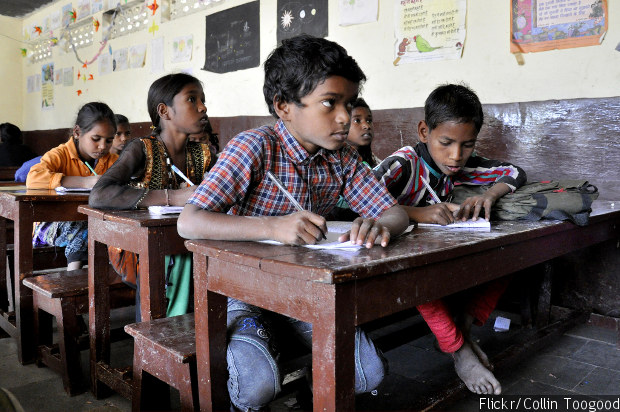 Reading and some math skills of Madhya Pradesh (MP) students are among India's lowest, the transition rate to higher classes is lower than the national average, a majority of classrooms are shared by students of different grades, and government elementary schools are 17.6% short of school teachers, according an IndiaSpend analysis of various government data.

As the first part of this series observed, literacy rates and learning outcomes are some of the lowest in the BIMARU (Bihar, Madhya Pradesh, Rajasthan and Uttar Pradesh) states. By 2020, India will have the world's largest working-age population--869 million--but an IndiaSpend analysis of these four states--with 43.6% of India's school-age population between the age of five and 14--revealed that India is unprepared to educate and train its young population.

The literacy rate in Madhya Pradesh--with 72.6 million, India's fifth largest population--was India's ninth lowest, 70.6%, in 2011. This was an increase of 6.86 percentage points from 2001--the second-lowest increase among BIMARU states, according to Census 2011.

Learning levels in rural MP are among India's worst. Only 34% of all children surveyed in grade V in rural MP could read a grade II level text, the second lowest across all states--only behind Assam--according to the 2014 Annual Status of Education Report (ASER), and the proportion of grade V children who could at least subtract was 31%, the lowest in India.

The transition rate from primary (grade V) to upper primary (grade VI) in Madhya Pradesh was 88.67% in 2014-15, according to the Unified District Information System (U-DISE) Flash Statistics 2015-16--below the all-India average of 90%.

At the upper primary level, learning levels are worse. Only 18% of grade VII students could read English sentences--the lowest in the country. Of those who could read, only 43% could tell the meaning of the sentence--again the lowest, indicating that even students who transition to upper primary perform poorly in comparison with students in other states.

Shortage of teachers, infrastructure in MP

As many as 78% schools surveyed had children from grade II sharing a classroom with other grades, an increase from 67% in 2010, according to the ASER 2014 report.

Similarly, the proportion of schools where grade IV children shared a classroom with other grades increased from 57% in 2010 to 69% in 2014.

As several grades study in one classroom with the same teacher or teachers, more training, and different kinds of pedagogy would have to be used to reach every child, according to an ASER 2011 report. The Right To Education Act does not specify any regulations for multigrade classrooms, and it is possible that schools provide few teachers with special training to equip them to teach in multigrade classrooms.

Public expenditure on elementary education (grade I to grade VIII) per student increased by 50% between 2011-12 and 2014-15, but this increase was mainly due to the decline in enrolment than any increase in real expenditure, the Economic and Political Weekly reported in September 2016.

The enrolment at primary level (grade I to V) declined from 10.7 million in 2010-11 to 8.67 million in 2014-15, a decline of 18.97%, according to U-DISE data, mostly because fewer children enrol in primary school at the wrong age--raising the per student spending in the state.

70% of seats reserved for the poorest not filled

As many as 70% of Right to Education (RTE) quota seats were not filled in MP, Hindustan Times reported in October 2016. The RTE Act (2009) requires that one quarter of all seats be reserved for free schooling to the poorest students in all private, unaided primary schools.

Only 170,000 students were admitted on the RTE quota in 2016, although more than 420,000 seats were reserved. The shortfall is attributed, in part, to an online lottery system that parents found hard to use, according to the Hindustan Times report.

Seats were left vacant because parents want to enrol their children only in selected schools, an education department official told Hindustan Times.

Delhi and Maharashtra also adopted a similar centralised online allotment of seats in private schools, according to this report on the status of implementation of RTE. The report states, citing other news articles and reports, that "although going online with the admission process appears to be a good move to improve transparency and efficiency… not all parents would be able to apply online for admissions, especially the ones coming from the lower strata of the society".

MP also revoked the 'no-detention policy' in October 2016, as the Times of India reported in October 2016, allowing all government and private schools to hold back students in the same grade after grade V, due to the state's declining quality of education, according to Deepak Joshi, minister of state for school education. Earlier, students would not repeat grades until grade VIII, except in schools affiliated to the Central Board of Secondary Education.

This is the fourth of a five-part IndiaSpend series that looks at progress in education in the states of Bihar, Madhya Pradesh, Rajasthan, and Uttar Pradesh. You can read the first part here, the second part here, the third part here and the fifth part here.