Sonipat: Lok Sabha constituencies reserved for the scheduled castes (SC) and scheduled tribes (ST), and constituencies in areas affected by left-wing extremism saw a higher percentage of voters choosing “none of the above” or NOTA in the 2019 Lok Sabha polls, while states that saw a multi-party contest saw a lower share of votes cast for NOTA, our analysis of polling data has revealed.

The option to choose “none of the above” was put in place by the Supreme Court in its 2013 judgement following a writ petition by the People’s Union for Civil Liberties, a human rights body. NOTA was envisaged to help voters express dissent while still maintaining the secrecy of their ballot to help achieve greater participation in the exercise of democracy.

“When the political parties realise that a large number of people are expressing their disapproval with the candidates being put up by them, gradually there will be a systemic change and the political parties will be forced to accept the will of the people and field candidates who are known for their integrity,” the then Chief Justice P Sathasivam wrote in the judgement.

On October 29, 2013, the Election Commission of India announced that even if the NOTA votes were higher than any other candidate in a constituency, the candidate with the most votes will be declared the winner.

“This provision made the NOTA option almost redundant,” Jagdeep Chhokar, founding trustee of the Association for Democratic Reforms, wrote in this December 2018 comment in The Hindu. “...the provision clarified that a NOTA vote would not have any impact on the election result, which is what interests candidates, political parties, and voters. Soon after this, candidates began campaigning against NOTA, telling voters that choosing the option meant wasting a vote.”

To look at the impact of NOTA on the 2019 election result, we compared the winning margin in a constituency against the NOTA vote-share. Twenty-six of 543 constituencies saw a higher vote-share for NOTA than the victory margin. That is, if those who voted for NOTA had chosen the runner-up in a constituency, he/she would have won the race.

NOTA will also help “wide participation of people”, the Supreme Court had said in its 2013 judgement. However, election data do not show such correlation: Of the top 10 constituencies with the highest NOTA vote-share, three recorded a turnout greater than the national average.

“So NOTA remained a toothless tool,” Ajit Ranade, economist, political analyst and a founding trustee of ADR, wrote in December 2018 in the Pune Mirror. “The NOTA button is a vote of discontent and must have teeth.” He cited the Maharashtra state election commission’s decision, applicable to local body elections, as an example. Under the order, if NOTA got the most votes in a constituency, the election would be cancelled and a fresh election would have to be conducted.

This is in line with earlier elections, according to this June 2019 analysis by Factly.in, a data journalism portal, which studied from 43 different elections and 6,298 constituencies (both Lok Sabha & assembly) that went to polls after the introduction of NOTA in 2013. 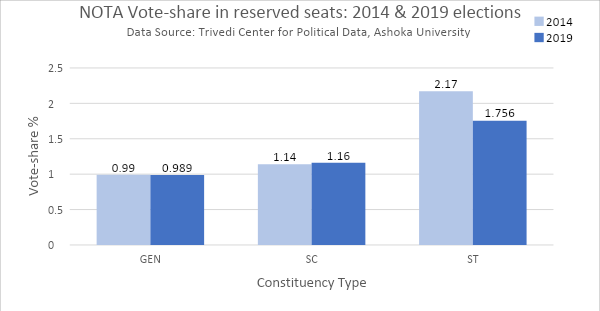 Anecdotal evidence from Gadchiroli in Maharashtra and Bastar in Chhattisgarh suggests a mobilisation of Other Backward Classes (OBC) vote favouring NOTA against the ST candidates, according to this August 2018 paper in the Economic and Political Weekly.

In Bastar, OBCs formed the Pichda Varg Kalyan Manch (Backward Class Welfare Front), to protest against ST candidates, who according to them were getting unfair rights due to enforcement of the fifth schedule which grants special rights to tribal communities.

Since the inception of NOTA, areas affected by left-wing extremism have, on average, seen a higher NOTA vote-share as compared to other parts of the country, our analysis showed.

Of the top 10 constituencies with the highest NOTA vote in 2019, six are in areas affected by left-wing related violence, according to our analysis. This includes Bastar in Chhattisgarh where 4.56% of votes cast were for NOTA--second only to Gopalganj which recorded a 5.04% NOTA vote. 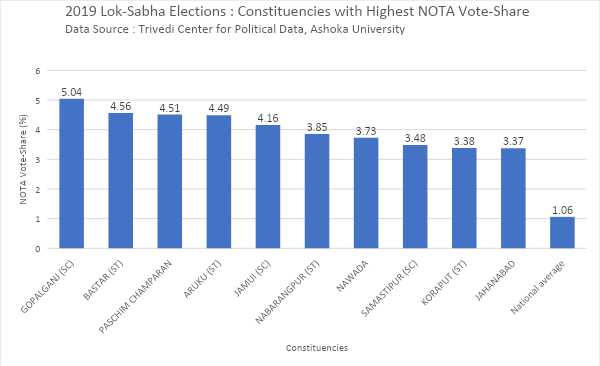 The high NOTA vote-share in the areas affected by Naxal and Maoist insurgencies points to a possible use of NOTA as a means to protest against state machinery.

The outlawed Communist Party of India (Maoist) used NOTA to “buttress their assembly election boycott call in Chhattisgarh” ahead of the 2013 state assembly elections, according to this October 2013 Times of India report. The rebels conducted training camps with dummy EVMs in Bastar to acquaint voters with NOTA and explain its significance as a tool to “protest against the government’s oppression and exploitation,'' the report said.

States which saw a direct bi-polar contest between the two main national parties--the Indian National Congress and the Bharatiya Janata Party or their allies--saw a higher NOTA vote-share as compared to states where there was a third alternative, our analysis of 2019 election data showed.

Uttar Pradesh and Delhi, which saw three-way contests, recorded 0.84% and 0.53% NOTA vote-shares, respectively. While Delhi had the third alternative of the Aam Aadmi Party, Uttar Pradesh saw the alliance of the Samajwadi Party and the Bahujan Samaj Party as an alternative to the national parties.

(Bansal and Marathe are students at Ashoka University.)