More than 56% of India’s COVID-19 cases have been detected in the last six days, our analysis shows. As a result, several Indian states are considering an extension of the nationwide lockdown. 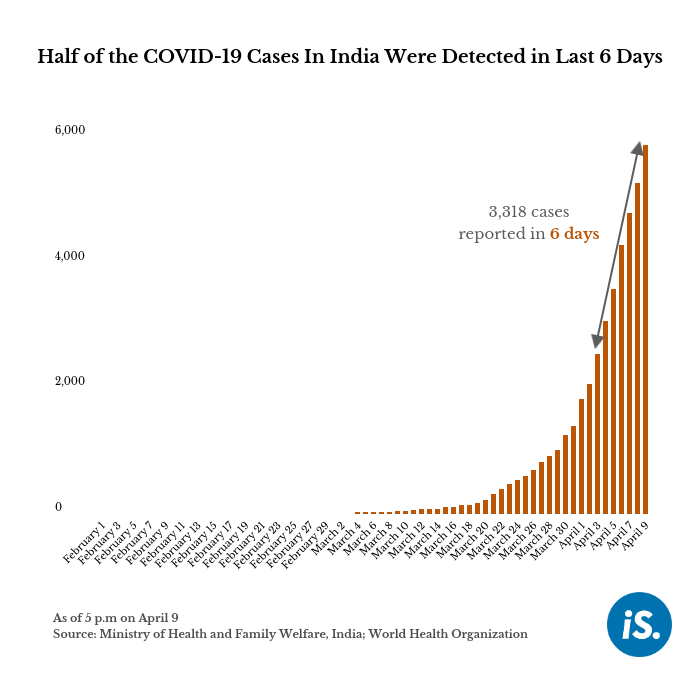 Since 5 p.m. on April 8, India has reported 591 new cases--the second highest 24-hour increase so far. The highest increase was on April 6, when 704 new cases were reported.

The Indian Council of Medical Research has today expanded COVID-19 testing criteria in ‘hotspots’, clusters and migrant gatherings or evacuee centres to test everyone with an influenza-like illness (ILI, or showing symptoms such as cough and fever).

The total COVID-19 samples tested in India nearly doubled in the eight days of April. That is, in the last eight days, India has tested nearly as many people as it did in the two preceding months. Yet, India is conducting fewer tests (95 per million people) compared to Italy (13,363) and the US (6,359), which have reported among the highest cases globally.

Odisha became the first state to extend the 21-day nationwide lockdown by 15 days to April 30. The state has recommended the Centre do so as well. Hyderabad, which had 161 cases as of April 8, has identified 12 COVID-19 hotspots for lockdown to contain spread, after Uttar Pradesh and Delhi sealed districts and hotspots on April 8.

The Centre has approved a Rs 15,000-crore ‘India COVID-19 Emergency Response And Health System Preparedness Package’, to support the procurement of essential medical equipment, consumables and drugs, and surveillance.