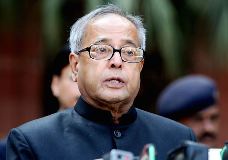 Finance Minister Pranab Mukherjee has reiterated his government's commitment to Goods & Service Tax. He also said, that a National Information Utility for the Central Board of Excise and Customs has been approved by the Government on the recommendation of the Technology Advisory Group.

As we know, there are a few other such proposals from the TAGUP which are awaiting green signals. All of which mean billions of dollars of hardware/software contracts are yet to flow from Government in the federal governance space alone.