More Indians Die Of Poor Quality Care Than Due To Lack Of Access To Healthcare: 1.6 Million

New Delhi: Some 2.4 million Indians die of treatable conditions every year, the worst situation among 136 nations studied for a report published in The Lancet.

Poor care quality leads to more deaths than insufficient access to healthcare--1.6 million Indians died due to poor quality of care in 2016, nearly twice as many as due to non-utilisation of healthcare services (838,000 persons).

“For too long, the global health discourse has been focused on improving access to care, without sufficient emphasis on high quality care,” Muhammad Pate, co-chair of the commission that produced the report, who is also chief executive of Big Win Philanthropy and former minister of state for health in Nigeria, said in a statement. “Providing health services without guaranteeing a minimum level of quality is ineffective, wasteful and unethical,” he said.

As the Indian government readies to roll out its ambitious national health protection scheme, the Ayushman Bharat Yojana, by the end of September 2018, the study’s findings are crucial.

“We need to better measure the quality of our health system as a composite entity rather than be merely content with certifying hospitals and laboratories,” said Srinath Reddy, president of the Public Health Foundation of India, a Delhi-based think tank, about the lack of mechanisms for monitoring quality in India. “Some elements of quality, mainly in maternal and child health, are being monitored under NRHM [National Rural Health Mission]. However, composite measures of the health system overall are unavailable,” he said.

The Clinical Establishments (Registration and Regulation) Act, which could go some distance to address this lack, is yet to be adopted by many states even though it was passed by parliament way back in 2010, Reddy said.

An estimated 8.6 million deaths in low- and middle-income countries every year are due to conditions treatable by healthcare, of which 5 million result from poor quality of care and 3.6 million from insufficient access to care, according to The Lancet Global Health Commission on High Quality Health Systems, whose report has been published in the medical journal The Lancet on September 6, 2018.Source: The Lancet

These deaths led to economic welfare losses of $6 trillion (Rs 429 lakh crore) in 2015, the commission estimated.

The total number of deaths from poor-quality care globally--5 million per year--is estimated to be five times as many as the annual global deaths from HIV/AIDS (1 million) and nearly three times more than deaths from diabetes (1.4 million), according to the study that was part of a two-year project that brought together 30 academics, policy-makers and health systems experts from 18 countries to examine how to measure and improve health systems’ quality worldwide.

Given the current global focus on universal healthcare (UHC), the commission found that expanded healthcare coverage does not always mean better quality. “The central role of quality is not yet sufficiently recognised in the global discourse on UHC and is underappreciated in many countries,” the report says.

“The impact of poor quality care goes well beyond mortality, but can lead to unnecessary suffering, persistent symptoms, loss of function, and a lack of trust in the health system,” commission chair Margaret E. Kruk of Harvard T. H. Chan School of Public Health, Boston, USA, said in a statement.

“Other side effects are wasted resources and catastrophic health expenditures,” Kruk said, “Given our findings, it is not surprising that only one quarter of people in low and middle income countries believe that their health systems work well.”

More than one million of 8.6 million preventable deaths were from neonatal conditions and tuberculosis in people who accessed the health system but received poor quality of care in 2016. An estimated 81% of cardiovascular deaths, 81% of vaccine-preventable diseases, 61% of neonatal conditions and half of maternal, road injury, tuberculosis, HIV and other infectious deaths were due to poor quality of care, the report says.

Just access to healthcare is not enough and good quality care is needed for better outcomes, the report says, citing the example of India’s Janani Suraksha Yojana (Maternal Safety Scheme). Started in 2005, the programme offers cash incentives to encourage women to give birth in health facilities. It has “increased facility delivery but did not measurably reduce maternal or newborn mortality”, the report notes. While it led to 50 million births in health facilities, many of them occurred in primary care centres that did not have sufficiently skilled staff to address maternal and newborn complications.

High-quality care involves thorough assessment, detection of asymptomatic and co-existing conditions, accurate diagnosis, appropriate and timely treatment, referral when needed for hospital care and surgery, and the ability to follow the patient and adjust the treatment course as needed.

This is often found lacking in middle- and low-income countries.

Adherence to evidence-based guidelines is low across countries--on average, healthcare providers only fulfill 47% of recommended care duties, with the median performance ranging from 44% in family planning and 64% in labour and delivery care.

In Uttar Pradesh, facility-based birth attendants perform only 40% of the tasks on the World Health Organization’s safe childbirth checklist in a typical birth, the report says.

Poor worse off than rich

While the quality of care is generally low in low- and middle-income countries, it varies between certain population groups and across conditions in the same area. Poor-quality care is more common among the vulnerable in any society.

In Madhya Pradesh, poor people living in poor communities received especially poor-quality care compared with richer communities even though both visited equally knowledgeable healthcare providers, the report notes. Additionally, poor people throughout the world live and die with little or no palliative care or pain relief.

On the other hand, the wealthiest women attending antenatal care sessions are four times more likely to undergo blood pressure measurements and urine and blood tests as the poorest women; adolescent mothers are less likely to receive evidence-based care; and children from wealthier families are more likely to receive antibiotics.

People with stigmatised health conditions, such as HIV/AIDS, mental health and substance abuse disorders, as well as other vulnerable groups such as refugees, prisoners and migrants, are less likely to receive high quality care, the report notes.

Across 41 countries, only 41% of women delivering in a healthcare facility said someone had checked on their health within one hour of delivery. Meanwhile, a 2018 Indian study conducted in Bihar had found that attending to would-be mothers within 10 minutes of their arrival at a facility could have prevented 37% of recorded stillbirths. 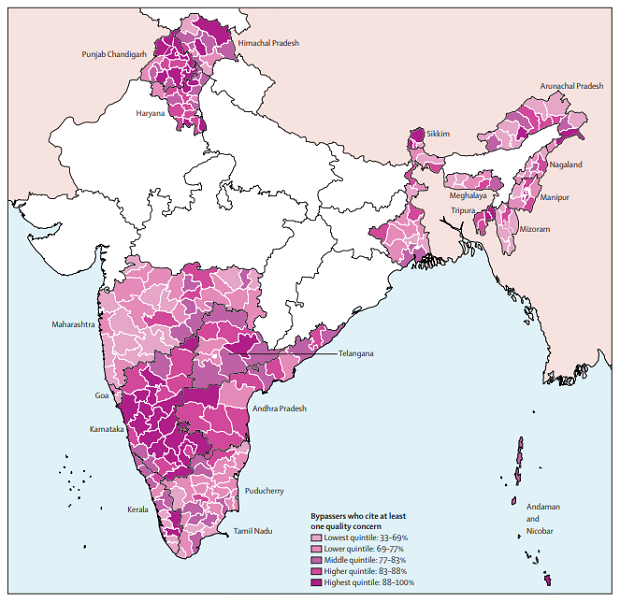 Figure 8: Proportion of households that report quality concerns as reason for bypassing public facilities in districts in India. Data are from the fourth cycle of the District Level Household and Facility Survey done by the International Institute of Population Sciences from 2012 to 2014, in 21 states of India. A quality concern was defined as mentioning any of the following as a reason for bypassing government facilities: inadequate infrastructure, doctor not available, absent health workers, poor quality, drugs not available, inconvenient hours, long wait time, or distrust. In darker coloured districts, a higher proportion of households cited quality concerns.

This kind of treatment further pushes people to seek care elsewhere. Half of households (51%) in India went to private facilities for healthcare, with 80% citing at least one quality concern, the commission said, citing India’s District Level Household and Facility Survey.

“Initial and continuing professional education of health care providers must emphasise care, concern, compassion, courtesy and respectful communication as essential elements of health service provision--whether it is individual patients they are dealing with in clinical care or with communities in public health,” Reddy suggested as possible ways to reduce discrimination.

“For this to be actualised, we need technical and financial audits to be supplemented by social audits measuring people’s levels of satisfaction with and utilisation of health services,” he added. 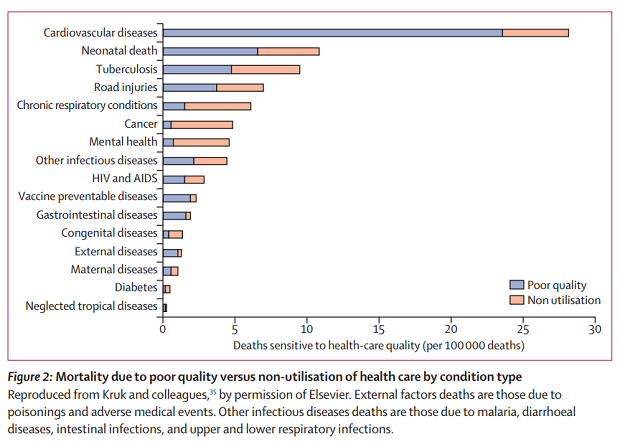 The right to high quality care

Public accountability and transparency on health system performance are two ways to improve the quality of healthcare, the commission recommends.

Commonly used health metrics such as the availability of medicines, equipment and skilled attendants do not reflect quality of care and even “lead to false complacency about progress”, it says, proposing a dashboard of metrics that should be implemented by countries by 2021 to enable transparent measurement and reporting of quality care.

Policy-makers must commit to reforming the foundations of health care systems, Pate, co-chair of the commission, said in a statement. “This includes adopting a clear quality strategy, organizing services to maximize outcomes not access alone, modernizing health worker education, and enlisting the public in demanding better quality care,” he said.