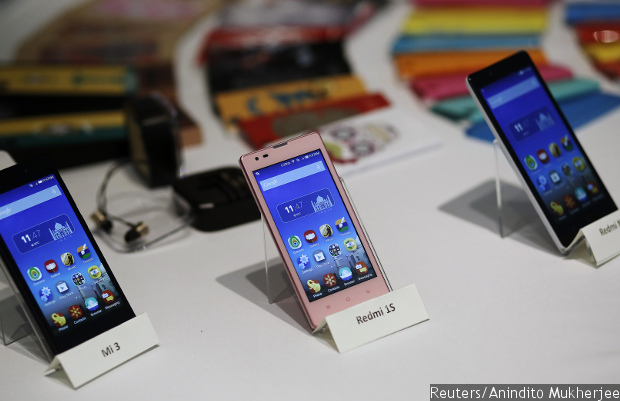 Models of China's Xiaomi Mi phones are pictured during their launch in New Delhi in July 2014. Xiaomi now assembles one phone every second at a new factory in India, as Chinese foreign direct investment inflows to India touched $1 billion in 2016.

China has emerged as one of the fastest-growing sources of Foreign Direct Investment (FDI) into India--it was the 17th largest in 2016, up from the 28th rank in 2014 and 35th in 2011, according to India’s official ranking of FDI inflows.

In 2011, total Chinese investment in India was $102 million. Last year, a record $1 billion of Chinese FDI reportedly came to India, but official Indian and Chinese statistics differ on cumulative figures. The Department of Industrial Policy and Promotion (DIPP) last year estimated that total FDI from China between April 2000 and December 2016 was $1.6 billion. Indian industry analysts and media reports have estimated the figure to be over $2 billion.

Source: Department of Industrial Policy and Promotion; *As percentage of total FDI inflows

“China will be one of India’s top 10 investors shortly,’’ Pai said. He recalled his experience of building a clientele in Beijing in 2010. The Indian firm he worked for had no clients in China. He would drive up and down Beijing’s best-known road, Changan, noting down companies’ names on buildings along the way. Later, he would track down those companies online and approach them for business. In six years, his firm’s Chinese clientele grew from zero to 120 companies (the firm has since merged with the one he works with now).

Six years ago, investors from the world’s second-largest economy were hard to find in India. Today, India’s largest digital payments company Paytm is 40%-owned by Chinese e-commerce firm Alibaba and its affiliates, and Alibaba is reportedly raising its stake to 62%. China’s fourth-largest mobile phone company Xiaomi assembles one phone every second at a new factory in India.

Sixty percent of Chinese FDI is concentrated in the automobile industry. Several companies’ regional offices are located in Ahmedabad, although Chinese companies are gradually moving away from an initial preference for Gujarat towards Maharashtra, Andhra Pradesh, Tamil Nadu and Haryana. Seven smartphone companies from China have launched, or plan to launch, factories in India, according to a February 2017 Chinese media report, Rise and Coexist.

This is higher than other BRICS countries’ investment in India--Brazil chalks up 0.01% and Russia 0.37% despite historically robust relations. Yet, China’s 0.5% share pales in comparison with fellow Asian powerhouse Japan (7.7%). Meanwhile, the US, which China recently replaced as the world’s largest economy in purchasing power parity terms, has a 6.13% share in total FDI in India.

While China’s FDI flow into India last year showed a relatively significant rise, the figure was negligible when viewed against China’s outbound investment of over a trillion yuan or $170 billion across 164 nations last year--including $45.6 billion in the US alone.

Chinese FDI in India has increased even as India and China have picked new points of political disagreement in the last two years. India objects to China’s $46 billion investment in the China-Pakistan economic corridor that passes through parts of Pakistan-occupied Kashmir. Last year, Beijing obstructed India’s efforts to get membership of the Nuclear Suppliers Group, and China has repeatedly blocked a proposal at the United Nations to blacklist Jaish-e-Mohammed chief Masood Azhar, implicated in terror strikes in India including the 2016 Pathankot attack.

“There is no drop in the activity of Chinese companies evaluating India because of political relations between the two countries,’’ Sridhar Venkiteswaran, CEO of Avalon Consulting in Delhi, told IndiaSpend. “Increasingly, the Indian political establishment too does not want to place any roadblocks on Chinese investment into India… but Indian companies tend to push back when there is negative news about the Sino-Indian relationship.”

The bilateral tension in their relations is reflected in public opinion. Last year, 31% of Indians and 26% of Chinese had a favourable view of each other, according to the Pew Research Centre. A senior Chinese official recently remarked to the media that India’s investment climate is improving and laws are more “sorted” … but “when something (negative) happens in India, our investors get worried”.

Chinese commentary on India today reflects this combination of geopolitical rivalry and enhanced commercial interest. China’s government-backed newspaper Global Times published a record-setting 80 opinion pieces on India in 2016, and its coverage of India is on the rise. The articles are a mix of political warnings against antagonising China and business reports evaluating investment in India. Though New Delhi has refused to endorse China’s One Belt, One Road initiative to build infrastructure to link Asia with Europe and Africa, sections of the Chinese media have projected an upcoming industrial park in India’s Gujarat as part of the same Chinese initiative.

Faced with double-digit increases in labour costs, an ageing workforce and a record slowdown in economic growth, Chinese companies have been searching for alternative manufacturing destinations and new markets since the economic downturn of 2008.

India is a “hot investment opportunity”, Li Bojun, a counsellor at the Chinese embassy was quoted saying in the People’s Daily in February 2017. Chinese companies are showing more confidence in the Indian economy as it grows faster than their own and narrows the gap in competitiveness between the two Asian giants. India ranked 39th compared with China at 28th in the World Economic Forum’s Global Competitiveness Report on 138 nations in 2016-17, raising its rank by 16 positions from the 55th in 2015-16.

“The fact that the Indian economy is now the fastest-growing has had a positive signalling effect in China,’’ Pai said.

A 2015-16 joint report by Indian industry association Confederation of Indian Industry (CII) and Avalon Consulting estimated that labour costs for manufacturing personnel are 1.5 to 3 times higher in China than in India. The report noted that China is “losing competitiveness” to India in several light engineering-related industries, which is attracting Chinese investors to India.

“The relative competitiveness of India compared to China is increasing, especially for Chinese companies to shift production from China to India in the automotive, chemical and electronics value added chain,’’ Venkiteswaran said. For example, he said, imports from China have been 35% costlier since 2013, and the cost of labour in China is increasing by 18-19% since 2014, compared with 8-10% in India.

Chinese businesses have noticed. One of the most-shared articles in March on the Global Times website warned: “China should pay more attention to India’s increasing manufacturing competitiveness”.

Coverage of India’s economy and manufacturing competitiveness is increasing in China since the Bharatiya Janata Party came to power in 2014. Prime Minister Narendra Modi is known better in China than his predecessors, partly due to his Weibo account, which was launched in 2015. Modi’s image as a decisive political leader and promoter of economic reforms is viewed positively by Chinese investors.

Modi was recently termed a “man of action” and a “hardliner”, qualities that the Chinese Communist Party is known to respect, in an article on the Uttar Pradesh assembly elections in Global Times.

However, it is far from smooth sailing for Sino-Indian investment. India’s attempts to gain market access in China for its information technology, agricultural and pharmaceutical industries have hit a wall for over a decade. India’s deficit in trade with China bloated to $46.56 billion last year. Bilateral trade remains below the target of $100 billion that both sides were aiming to achieve in 2015. At $70.08 billion in 2016, bilateral trade was 2.2% lower than the $71.63 billion in 2015. The CII-Avalon study forecasts that the trade deficit will hit $60 billion by 2018-19.

For mainland Chinese companies, India is not an easy place to do business, for several reasons. First, they are relatively unfamiliar with the business environment, as against firms from the US, Europe, Japan and South Korea, which have decades of experience in India.

Second, India trailed at 130th while China was ranked 78th in the World Bank’s latest (2017) ease of doing business index. Proposed industrial parks funded by China, including a reported $10 billion investment in Haryana, are stuck due to land acquisition and other complexities. Shanghai Fosun Pharmaceutical (Group) Co.’s move to acquire 86% stake in Indian drug-maker Gland Pharma Ltd has been dogged by uncertainty and delays regarding government approvals, as The Economic Times reported.

Chinese companies indicate a lot of interest in investing in India but “many are uncertain about sealing the deal due to the complex labyrinth of regulations and financial hoops”, Nazia Vasi, CEO of Mumbai-based Inchin Closer, an India-China language and business consultancy, told IndiaSpend.

“While larger, strong investors like Alibaba are making calculated strides in familiar territory,” Vasi said, “it will be a while until Chinese companies see their rate of return rise higher than their risk of being in India.”

Third, there are differences in business cultures. These differences emerge sharpest during negotiations, Pai said, due to a lack of communication skills to understand each other. Both sides struggle to identify suitable partners and prefer to focus on “intangible criteria such as trust and familiarity”.

“Indians who are more familiar with Western practices tend to adopt a straight-talking no-nonsense approach,’’ Pai observed, “whereas the Chinese prefer an indirect and subtle approach which comes across as ambiguous and non-serious. Most business negotiations either end up in a never-ending loop or fail. Those which reach a satisfactory conclusion falter a little after execution because consensus was reached by overlooking several potential dead-lock issues.”

In 2014, Chinese president Xi Jinping committed to a $20 billion investment in India over five years. If fulfilled, this would increase China’s economic footprint in India. But it would still be a small percentage of Xi’s more recent promise that China will invest $750 billion overseas in five years.

(Patil is the author of Strangers across the Border: Indian Encounters in Boomtown China.)