More Children Are Staying Put In School Than Ever Before 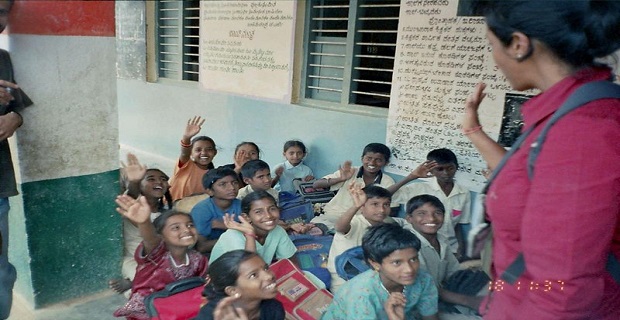 The UNICEF Millennium Development Goals (MDG) target for 2015 asks that all boys and girls complete a full course of primary schooling.

Considering that is now a year away, the target seems like a cruel dream, particularly for the millions of young boys and girls who could have been in schools but are not.

India has had a poor record in getting children into schools in the past. That’s changed with Gross Enrollment Ratio (GER) at the primary & upper primary level rising sharply over the years. Outcome is, of course, an issue but we will come to that shortly.

But more interestingly, it is now evident that larger numbers of children are staying back in school at the 'upper primary level’. Put simply, more children in primary grades are sticking to their classrooms and not abandoning them as they were wont to in the past.

Before we come to the how and why, let’s break down the numbers some more.

Quick definition: Gross enrollment ratio (GER) is the total enrollment in primary/upper primary level divided by the total population of children in the corresponding age group while NER considers only enrollment of children who are eligible for a particular level.

Let’s now pose two questions to try and establish how this is happening:

An increase in the first and reduction in the second can explain growing enrollments. Now, let us look at some basic enrollment numbers.

The north-eastern states had the highest GER at the primary level for 2012-13 with Manipur recording a GER of 150%. Mizoram, Sikkim, Arunachal Pradesh and Meghalaya are the other states with high GERs.

Experts say the unusually high GER numbers in some states could be due to flaws in the data capture methods employed or the population data used for calculations or enrollment numbers being inflated by some states.

Dr. Manjistha Banerji of ASER Centre, an autonomous unit of Pratham, the largest NGO working in the field of education in India, says a higher GER for a state means there are over-age children (children are more likely to be overage than underage in India on account of grade repetition or being enrolled at Grade 1 at slightly older ages) at the primary level in that state than lower GER states.

The bottom 5 states in terms of GER for the primary level are Kerala D&N Haveli, Bihar, Daman & Diu and Jammu & Kashmir. Kerala is a peculiar case here: the state has the highest literacy rate in the country but low GER. As per DISE, data coverage in Kerala is not complete and hence the recording of low GER.

Like we said earlier, upper primary level enrollments have grown at a much quicker rate compared to primary level between 2006 and 2012, growing 27.5%.

Sikkim had the highest upper primary GER in 2012-13 at 114.8%followed by Lakshadweep, Goa, Chandigarh and Delhi.The bottom five states in terms of GER in 2012-13 are Andhra Pradesh, Rajasthan, Jammu and Kashmir, Uttar Pradesh and Bihar. However, almost all the states have shown improved enrollments since 2006 at this level.

Mathematically, transition rate is the ratio between the number of children who are new entrants in Grade VI/Vdivided by enrollment in Grade V/IV in the previous year taken as a percentage.

* States that recorded above 100% transition rate have not been reported.

The state with the lowest average drop-out rate at the primary level was Tripura with 0.8%. Maharashtra, Tamil Nadu and Puducherry also have low drop-out rates.

States with high drop-out rates are Arunachal Pradesh with 18.7% and Bihar. It would be worth examining the reasons for the high drop-outs in these states.

Reasons for the higher retention at the upper primary level (and attraction to primary school too) could be Government schemes like the SarvaShikshaAbhiyan, the Government of India's flagship programme for Universalisation of Elementary Education (UEE)andthe Mid-Day Meal (MDM) scheme, the world’s largest school meal programme reaching out to about 120 million children across the country every day. Though we’ve not studied the reasons for the purpose of this article.

Parth J Shah, Founder&President, Centre for Civil Society, a non-profit organisation in the field of education, says the Government has done well in terms of increasing the number of schools and the capacity of schools in the last 15-20 years. “Moreover, enrollment has been incentivised by providing schemes like the Mid-Day Meal (MDM) and providing uniforms and textbooks,”he says.

The larger issue now is outcome. Says Dr. Banerji: “Enrollment in India has been above 90% for some time now. As per ASER 2012, overall enrollment was over 96% for children in the ages 6- 14 years. But enrollment, per se, does not ensure quality learning outcomes or regular attendance in schools.”

According to her, for instance, ASER 2012 shows that more than 50% children in Class V cannot read a simple Class II level text. Similarly, in states such as UP, attendance is only around 50%. “Given that enrollment is close to universal, it is time we shift focus to learning. For this, we need to ensure that children attend school regularly and have realistic learning goals in terms of what we expect children to be able to do at the end of each class,” she says.

Adds Mr. Shah: “Improving quality of education is the next frontier in education in India.”