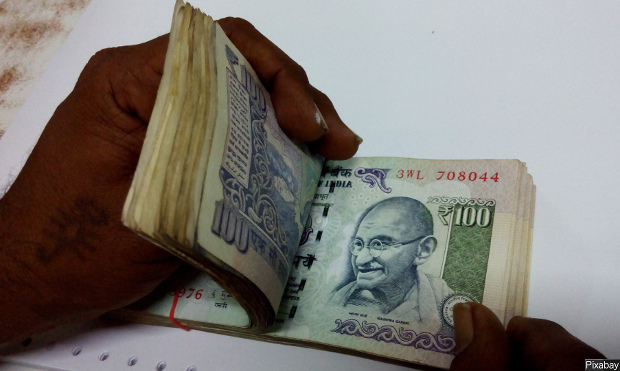 About Rs 5.3 lakh crore (at the current exchange rate of Rs 64/US dollar) flowed out of India illegaly in 2007, a government-commissioned report on black money has revealed. The amount is 5% less than the water resources ministry’s estimates (Rs 5.6 lakh crore) of the cost of linking the country’s rivers to address water scarcity and flooding.

Economic & Political Weekly, in collaboration with Business Standard, recently uploaded the National Institute of Public Finance and Policy (NIPFP) report on black money. The 1,200-page report, whose highlights Business Standard reported on May 3, 2017, and The Hindu reported in August 2014, is yet to be made public.

The report was commissioned in 2012 by and presented in 2013 to the Central Board of Direct Taxes (CBDT) under the Congress-led United Progressive Alliance (UPA) government. The report has not been released even by the current National Democratic Alliance (NDA) government.

The pharmaceuticals sector generated Rs 46,200 crore black money in 2009-10--about the same as the amount Air India’s chairman said the airline needs in 2017 for a turnaround, according to this report in The Indian Express on May 15, 2017.

In 2010, under- or over-billing exports from or imports to India cumulatively generated about Rs 2.3 lakh crore (at the current exchange rate of Rs 64/$) of black money, 28% more than what the government plans to spend on the rural sector (Rs 1.87 lakh crore) and 4% less than what it has budgeted for roads, railways, shipping and other modes of transport (Rs 2.4 lakh crore) in 2017-18.

The flow of black money abroad ranged from less than 1% to 7% of India’s gross domestic product (GDP) between 2000 and 2010, according to the NIPFP report. 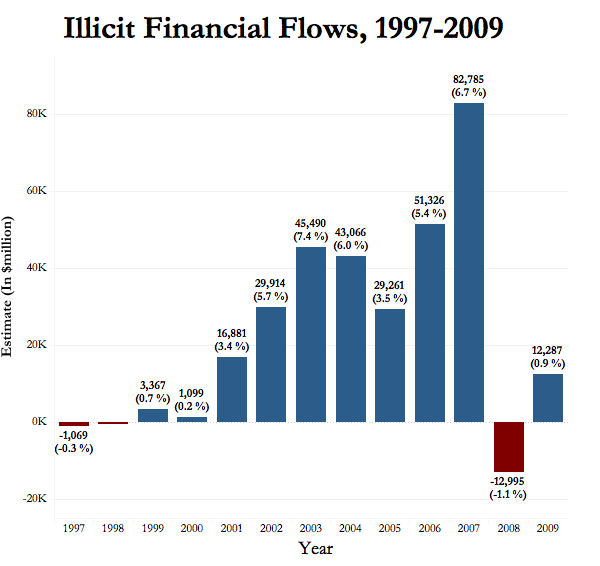 Real estate and gold and jewellery were identified as the sectors where major unaccounted incomes might be held as wealth.

“At least for medical professionals, fashion designers, legal professionals,” the NIPFP report pointed out, “there is large scope for under/non-reporting income due to high incidence of cash/without-bill transactions.”

There is no relation between returns of income and service tax filed by professionals, clearly indicating rampant non/under-reporting of incomes and inflation of expenses, the report argued.

The report has suggested measures such as establishing benchmarks for likely range of professional expenses and improvements in tax forms to improve linkage between service tax payments and income.

“Inadequate monitoring and regulation has resulted in extensive misuse of licences resulting in over-mining supported by widespread corruption,” the report said.

“The average unaccounted incomes as a percentage of reported GDP from the minerals… for the decade 2001-0 [sic]” has been estimated to be 10.32%, excluding illegal mining.

An earlier committee set up under Justice M B Shah by the UPA government to study illegal mining in seven states was abruptly wound up three years after it was constituted in 2010. The Shah committee could submit a final report only on Karnataka. 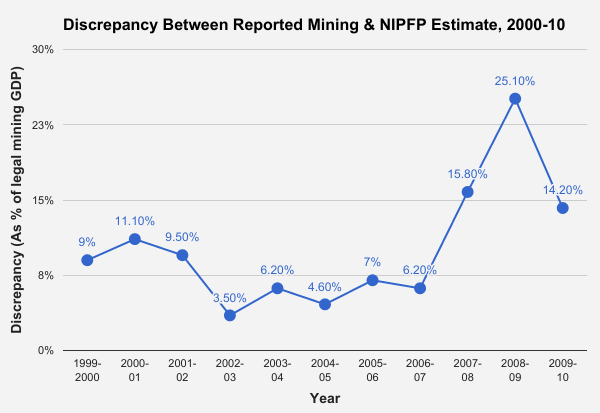 Lack of coordination between multiple regulatory agencies in the pharmaceutical

sector--a representative for the chemicals industry--has led to substantial under-reporting of sales and sale of spurious drugs between 2000 and 2010, the NIPFP report argued. 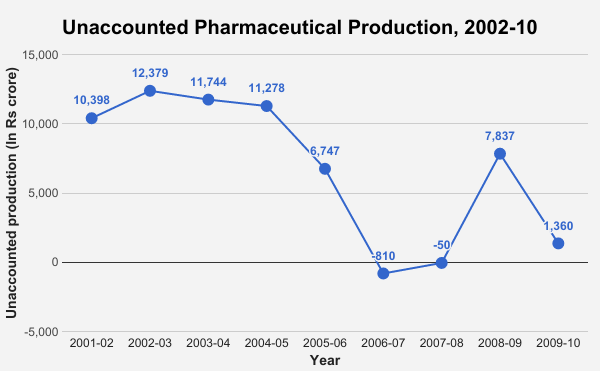 The share of substandard and spurious drugs (at licensed retail outlets and government stores, put together) has been estimated to be 3.16% and 0.0245%, respectively, according to The National Drugs Survey 2014-16 based on tests of 47,012 drugs samples.

The large presence of small-scale units has also made monitoring difficult in the pharma sector, the NIPFP report noted.

Pharma companies should be issued single-use stamps to be pasted on each unit they produce, the report suggested, citing the use of prepaid tax stamps in American states to control drug trade.

Public distribution system (PDS) kerosene diverted to adulterate diesel (36% of total sales by volume, according to NIPFP estimates) created Rs 11,910.1 crore unaccounted income in 2011-12, the report estimated. The amount is 8% more than the government’s budget for the drinking water and sanitation ministry (Rs 11,005.24 crore), and 6% less than its budget for the women and child development ministry (Rs 12,733 crore) in 2011-12. Price control of kerosene and tax structure of both products are blamed for this diversion.

The leakage of PDS kerosene allocated in 2013-14 was 41%, according to data presented by petroleum minister Dharmendra Pradhan to the Rajya Sabha in July 2015.

The size of the black economy

Defining “unaccounted incomes as incomes not reported for the estimation of GDP”, the report estimated black money to be 41.7% of total estimated GDP or 71.5% of reported GDP in 2009-10.

One of the ways of estimating black economy assumes that the share of unaccounted incomes is reflected in the stock or flow of money in an economy. Since illicit transactions take place mostly in cash, any evasion from the official economy would raise demand for currency. By looking at the changes in currency demand, NIPFP has estimated the size of GDP from the known stock of money. The estimated GDP is then compared with the reported GDP. The difference between the two GDPs is the black economy, according to the NIPFP report.

India’s black economy was estimated to be 24% of GDP in 2007, according to a 2010 World Bank working paper. Arun Kumar, professor, Jawaharlal Nehru University, who wrote a book-length work on the black economy in India in 1999, has estimated it to have grown to 62% in 2013.

Economists typically use a physical indicator whose consumption is assumed to be related with unaccounted economic activity to estimate the size of the black economy. The NIPFP report used land freight transport because it is used as an input in all sectors of the economy. For instance, output from illegal mining will need trucks for moving extracted ore. In fact, unaccounted incomes in land transport and construction are derived from unaccounted activities in mining, the report argued.

It cannot be definitively said whether high levels of taxation, unemployment etc, create black money or vice versa, the report cautioned, owing to paucity of data.

Among the limitations the report said it faced in analysing policy choices were the lack of organised and consistent data.

For instance, there were large discrepancies in information given by various authorities on mining, pointing to the unreliability of public data.

“The only authoritative figures of the sale and purchase of gold in India are from the World Gold Council,” the report said.

“It appears that most policy analysis would have to be based on hunches and guesses,” the report added.

The report has recommended moving from “the extreme unreliability of the Indian Mineral Yearbook” to technologies such as satellite imagery for the mining sector.