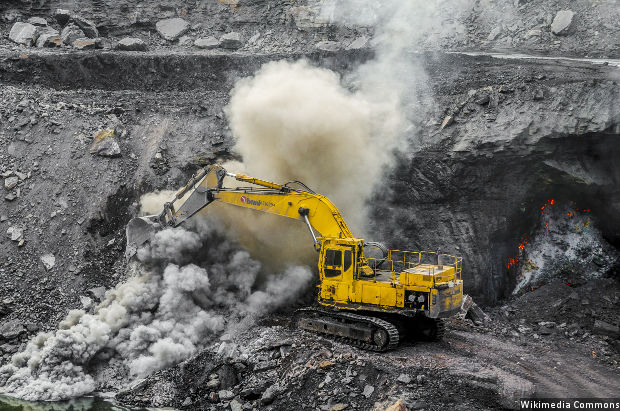 The government has estimated that by the year 2020, India will need 1.5 billion tonnes of coal. But an IndiaSpend analysis of a recent report by Brookings India indicates that even by a generous estimate, the country’s need for coal will not exceed 1.2 billion tonnes over the next four years.

There is another reason to scale down this target: To achieve its target, the government would have to invest around Rs 10 lakh crore ($ 149 billion), according to a June 2016 PriceWaterhouse Coopers (PwC) report. That is four times India’s annual defence budget.

Laying down the government target early last year, Union Coal Secretary Anil Swarup had apportioned coal-production thus: “What we have worked on is that a billion tonnes will come from Coal India Limited (CIL) and 500 to 600 million tonnes (MT) from the private sector.”

A state-owned company that accounts for 80% of India’s coal production, CIL has indeed increased its output by 74 million tonnes over the past two years, as Factchecker reported in August 2016. But it is unlikely that it will get the government the yield it hopes for, we find.

How much coal will we actually need by 2020?

1. Base growth rate: In this case, the report analysed two different scenarios:

a) Scenario 1: Non-power-sector demand was extrapolated based on gross domestic product (GDP) and assumptions were made that demand and production would be elastic--responsiveness of production to rise in demand and prices. Power demand was calculated on upcoming thermal power capacity (examining all plants under construction, their locations, technology, and status, assuming a similar plant load factor (PLF)—or the capacity utilisation of a power plant--as in financial year (FY)’14-15. Assumptions for the non-power sector include the following: 8% GDP growth, respective sectoral GDP changes due to supply and demand and continued imports proportionate to imports in the base year FY’14-15. This scenario puts the estimate at 1,311 MT.

b) Scenario 2: The non-power-sector demand was kept the same as scenario 1. A power-demand calculation was made assuming i) no power cuts by 2020 b) electrification to unconnected rural consumers and reduction in distribution losses. This scenario pegs the estimate at 1228 MT, a more realistic figure, as per the report.

2. High Coal: This method, which pegs India’s coal requirement at 1,291 MT, is optimistic and assumes no imports of thermal coal (coking coal--used to primarily manufacture steel--imports, however, are assumed to continue), a high GDP growth of 8%, 100% electrification with no power cuts, and a modest growth of renewable energy. The assumption is that renewable energy does not displace coal very much as a source of power generation.

Although the health costs to India of using coal to generate electricity are about $4.6 billion (Rs 29,400 crore) annually, which is the cost of setting up five power plants of 1,000 mega watts (MW) each, or 2% of India’s installed capacity, every year, India may have little option but to focus on coal as the primary source of electricity, with the need for coal-fired electricity estimated to increase three times by 2030, as IndiaSpend reported in May 2015.

Coal generates over 75% of India’s electricity and is among the cheapest energy sources available. But its main advantage over other feasible alternatives is that it is largely immune to interference from nature—quakes, floods, droughts—economic vagaries and artificial accidents.

3. Low Coal: This scenario assumes a partial improvement in supply quality with imports in the same proportion as in FY ‘14-‘15, and pegs the requirement at 1,139 MT.

Why are the targets too ambitious?

Today, about 45 MT of India's coal production (7.4% of coal production of India in FY ‘14-15) comes from private miners. Achieving the government target of 500 MT by 2020 would require an unprecedented 11 times growth or a compounded annual growth rate (CAGR) of 61% in the private sector.

If CIL and the other mining PSUs are to reach the 1-billion-tonne target, they will need to grow at an aggregated 12% CAGR. If the growth target is limited to just CIL, then the company’s CAGR will stand at 15%. The report notes that although CIL did achieve 8.5% year-on-year growth in FY’15-16--its best ever--it still missed its target by 12 MT, settling for 538 MT in the last fiscal. 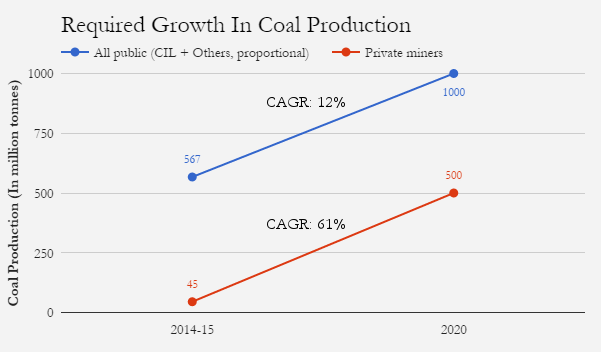 Target will require over Rs 10 lakh crore in investment

The report observed that India would need to reform land acquisition, ensure enough water, augment logistics infrastructures, develop coal washeries, and train workers to create an environment that would ensure the 1.5-billion-tonne target.

“The development of the sector will be critical to India’s economic growth. Major policy changes over the past couple of years have given the necessary impetus to the sector," wrote Kameswara Rao, Energy, Utilities and Mining Leader, PwC India, in the report. "The government will have to lead the growth of the sector by creating favourable conditions in terms of infrastructure, funding, technology upgradation and skill development.”