India’s lower house of parliament the Lok Sabha is now witness to something not seen in a long time- a one-party majority Government.The Bharatiya Janata Party (BJP), led by its Prime Ministerial candidate Narendra Modi, won 282 seats out of the 543 Lok Sabha seats in the 2014 elections, and the National Democratic Alliance (NDA) led by the BJP won 337 seats.

The last time it happened was in 1984, 30 years ago when the Congress won a complete majority in the house. Since then, no single party has had a majority and alliances had to be worked out to stay in power. One obvious question could be: Whose loss was BJP’s gain?

The dissatisfaction with the incumbent Government was clear in most assembly elections held in the past year, especially in the National Capital Territory of Delhi. But the Modi wave turned out to be so strong that it even managed to decimate parties like the Samajwadi Party (SP) or the Bahujan Samaj Party (BSP) that were very strong in India’s most populous state, Uttar Pradesh. The table below shows, party-wise, the seats BJP won in 2014 over 2009 from other parties across the nation.

Table 1: BJP Gains At Others Cost 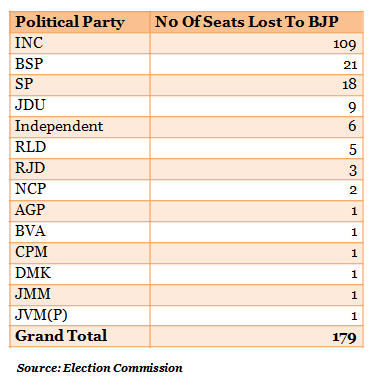 Obviously, the largest chunk of seats the BJP won over the last elections came from the Congress. But that would not have been enough for BJP’s “Mission 272”or the half-way mark. Even if they had retained all the 116 seats they had won in the 2009 pools (of which they lost 13 this year) they only captured 109 from the Congress.And that’s where the victory in UP assumes its importance.

The BJP was able to take away all 21 of BSP seats and 18 from SP. With 80 seats to offer, UP is no doubt the state that decides the outcome of the Lok Sabha polls. And the BJP won 71 to become the second party after the congress in 1984 where they won 83 out of the 85 seats. Modi’s decision to stand from the town of Varanasi in UP evidently paid off. The INC managed to save only two seats of namely Sonia and Rahul Gandhi. The BJP managed to clean BSP out of the state which also meant that they even captured the Dalit vote.

Maharashtra, which is the second state in terms of number of Lok Sabha seats with 48 and a big Congress supporter, also contributed most of Congress’s seats. BJP won 23 seats and their allies Shiv Sena got 18 seats in Maharashtra.

Where the Modi wave did not reach?

Geographically, the Modi wave did not reach the eastern side of the country.Starting from the North-East and following the trail of states downwards to the south- West Bengal, Odisha, Andhra Pradesh and Tamil Nadu – there was no effect of the Modi wave. Starting from Gujarat, the Modi wave could only reach till Bihar and Chhattisgarh. 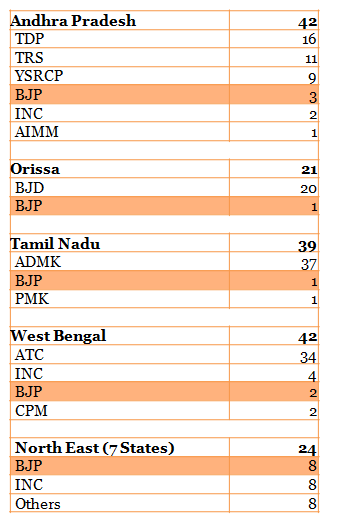 In our pre-election speculations, we had reckoned how a Third Front may come up if neither of the alliances- NDA or UPA - reached a clear majority. BJP did beat SP and BSP in Uttar Pradesh. But the scene for the Third Front was changed because of Bihar too where neither RJDnor JD(U) could cast the old magic.

So, although the Modi wave could not overcome regional issues in four states and the North-eastern region, the Third Front probables lost out on opportunities to rule at the Centre.