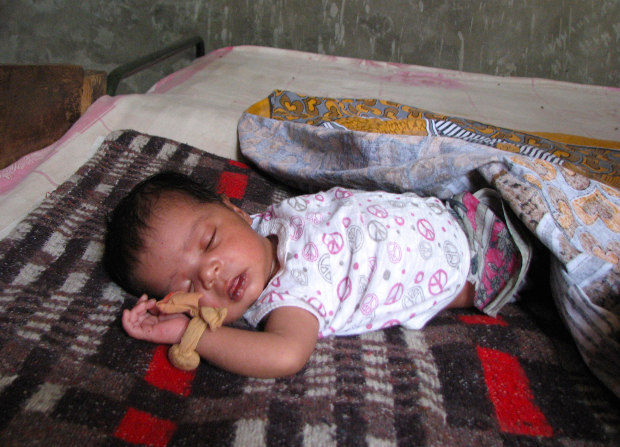 Manseerat Gill, 14 days old, from Amritsar, Punjab. She is one of the lucky ones in a state notorious for female foeticide.

For the next six years—thanks to Prime Minister Narendra Modi's determination to fight the country's bias against daughters—Manseerat’s well-being and survival will be the responsibility of a 6-foot-tall man with piercing eyes and a full, flowing grey beard.

Ranjit Singh Buttar is a rare male gynaecologist here in this holy Sikh city, and as district health officer, he has many other tasks, including running rural health centres, delivering contraceptives and ensuring polio inoculations to every new born.

Amritsar is one of 100 Indian "gender-critical" districts—10 are in Punjab, among India's five richest states by per capita income—included in Modi's "Beti Bachao, Beti Padhao (Save a daughter, educate a daughter)" programme, launched in January to fight the nation's deep-rooted bias against daughters. 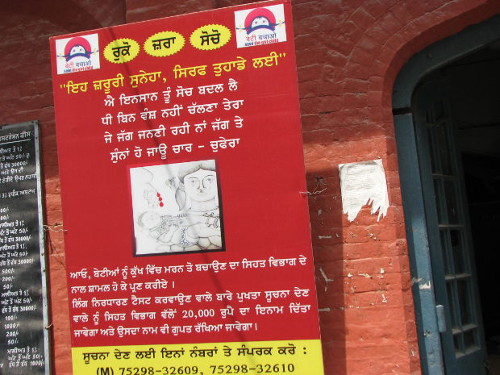 A poster for the ‘Beti Bachao, Beti Padhao’ campaign outside the District Commissioner’s office in Amritsar.

“The discrimination against girls is an illness, an illness of the heart, which leads us to think sons are more important," said Modi at the launch. "Even in feeding, a mother adds ghee to a son’s khichri but will deny this to a daughter.”

Modi is not the first prime minister to realise that India is losing girls. While the 1990s saw three such programmes, since 2005 there have been 11 schemes, one following the other, to ensure that more girls—discriminated against at birth and in upbringing—are born, live, go to school and do not marry early.

Yet, the girls continue to disappear. About 2,000 girls die—aborted or starved, poisoned or otherwise killed after birth—every day in India, according to Women & Child Development Minister Maneka Gandhi, who provided this data in April. The estimates of women so missing range from two million to 25 million.

A minister's dubious claim—and no money for Modi's programme

"Hundreds of girl children are being thrown into orphanages in these 100 districts," she told NDTV in an interview. "I was in Amritsar and the DC (Deputy commissioner) told me they had received 89 girls this month. I thought this is a weird statistic."

The minister got things wrong, IndiaSpend’s reporting indicates. The 82 girls she cites were abandoned in Amritsar not since January but since 2008, not as an impact of Beti Bachao, Beti Padhao but as a general malaise of giving up daughters.

What Amritsar did since 2008 was to collect these abandoned children as part of a Pangura (cradle in Punjabi) programme, housed in an International Red Cross building. Parents can leave children at a cradle here, instead of on the road or in fields. When a child arrives, a bell alerts staff, who place it in a hospital and later with adoption agencies. 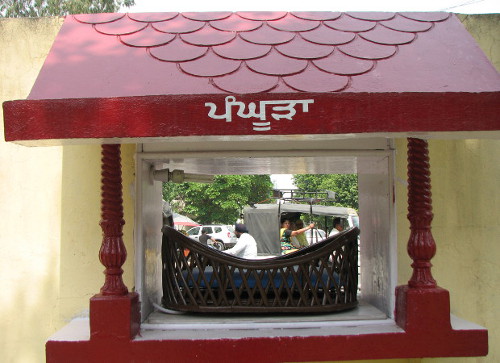 Pangura, which has a physical cradle placed in the International Red Cross building, has collected 82 abandoned girls in Amritsar since 2008.

Pangura received 92 children since 2008, 82 of them girls. The scheme is a reasonable success, but 82 girls saved over seven years will not impact skewed gender ratios. Besides, experts said abandoning daughters is no better than killing them.

What has not reached districts is money.

Buttar’s office is yet to get the first tranche of funds, two months after Jaitley’s announcement. Minister Gandhi’s office did not respond to IndiaSpend’s interview request.

If Modi’s programme has to impact pint-sized Manseerat, money, while important, is not the only factor. The effort, as past experience shows, cannot be piece-meal, split by bureaucracy, confused and uncoordinated.

Amount released so far (based on feedback from districts)

Other leaders, other schemes—and little evidence of success

India's political history is littered with programmes to protect girls such as Manseerat. Most have been of limited or no efficacy, hobbled by a rigid array of conditions and uncertainties about why they have not worked.

"(Our) findings point to the need to simplify the eligibility criteria and conditionalities, and also the procedures of registration under each of these schemes," noted a United Nations Population Fund study.

"Though year after year substantial financial resources have been directed towards promoting these schemes, there is a lack of field-level monitoring. In the absence of a proper grievance-redressal mechanism, the challenges often multiply. In some states, the lack of coordination across different sectors such as health, education and social welfare is adversely affecting programme implementation."

Implementing officers complained that other departments did not cooperate with them. In some states, tardy coordination between financial institutions, such as banks and insurance companies, and implementing departments delayed bonds, certificates and bank accounts. In most schemes, the involvement of local village institutions, NGOs and women's groups was "rather limited", as the study noted.

The Ministry of Social Welfare has been the nodal ministry for some schemes. State governments run parallel programmes they can tom-tom at election time. The Beti Bachao, Beti Padhao programme, managed by the Ministry of Women and Child Development, will be implemented through deputy commissioners and top bureaucrats in each district.

“The effort is fragmented. You need one entity that is then also responsible for results," said Buttar, whose office has written a plan for the scheme’s implementation covering Amritsar district’s 15 towns and 739 villages, home to 2.5 million people, 8.9% of Punjab’s population.

In Punjab, fewer than 850 girls survive to reach the age of six, 68 less than India’s already poor average of 918 daughters to a 1,000 sons, according to the 2011 census. Neighbouring Haryana has 12 districts in the programme. Maharashtra matches Punjab with 10 districts, where fewer girls are allowed to be born or survive compared to India’s average.

States With The Worst Child Sex-Ratios

What Modi is up against: India's desire for a male heir

“How can you expect daughters-in-law if you don’t have daughters?” Modi said at the public gathering on the launch of his scheme in Panipat, Haryana.

Not only do disappearing girls take a toll in terms of fewer number of brides and trafficking of women, India loses workforce talent and diversity. For instance, economists have struggled to explain the fall in women in India's workforce—contrary to global trends—over the 2000s, despite a rise in industrialisation and prosperity.

In Nangli village in Amritsar, Manseerat’s mother, Pinky, fresh-faced and 23, looks too young to have had two children. Both are daughters. 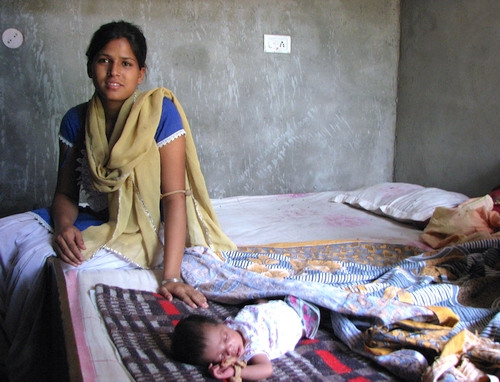 Pinky, 23, looks too young to have two children. Since both are girls, she might try to conceive again in the hope of having a son and “completing the family”.

Thanks to the presence of a trained health worker under the Rural Health Mission run by Buttar’s office, Manseerat was born in a hospital and not at home. She will also be innoculated. Her family of nine —sister, parents, grandparents, three unmarried uncles — live on a monthly income of Rs 15,000.

Pinky, who uses one name, has a ready laugh but it is clear she is disappointed with Manseerat.

“Could have been a son," she said. "Her father says a son will complete the family.” Pinky's conversation with her mother-in-law indicated she would give motherhood another shot—in hope of a son.

It is this desire for a male heir that Buttar’s office is up against.

Buttar, whose office keeps a record of gender ratios in Amritsar, said: “I am an eternal optimist; no effort goes waste.”

Optimism not enough: 31 states have zero convictions in gender testing

Buttar's optimism, in many ways mirroring Modi's, will go only so far.

To begin with, programmes for the girl child need to be brought under one roof, those involved in the programme said. The implementing department or ministry should have money, manpower and jurisdiction to use the carrot and stick: give incentives to have girls, hold awareness drives to change mindsets and prosecute under the law that criminalises female foeticide.

If the office of district family welfare officer is to be given the key responsibility for Modi's mission, then that office needs to be rid of diverse tasks, such as running rural health clinics, distributing contraceptives and family planning programmes. 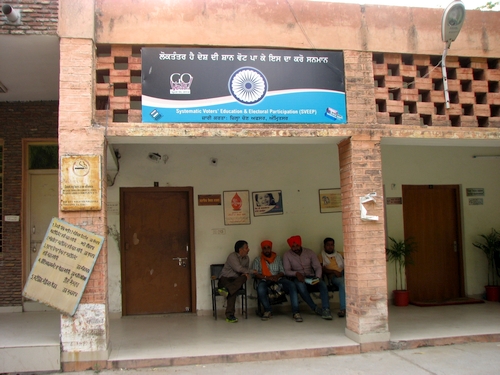 Amritsar’s district family welfare office, headed by Ranjit Singh Buttar. It is already overstretched, serving a population of 2.5 million across 15 towns and 739 villages.

Over two years, 2011-2013, no more than 32 people were punished under the law that criminalises pre-birth gender testing; gender-testing cases reported stood at 563, according to the Press Trust of India. Thirty states have not had even one conviction under this law, noted the Supreme Court of India.

Outside Buttar’s cabin, junior officer Tripta Sharma explained how she successfully played a decoy pregnant woman. She was sent to an ultra-sound clinic that was alleged to have violated the law by offering gender tests. The police made an arrest. But eight court appearances over a year and a half exhausted Sharma. The court dismissed the case.

“We are doctors, not lawyers,” said Buttar, who said his office would appeal the acquittal. He frequently raids ultrasound clinics, checking a third of them by rotation. With reluctant decoys, all his office has by way of checks on doctors and clinics is a document called "Form F", on which clinics must declare the purpose of the pre-birth test and the doctor-in-charge.

Academic research on female foeticide—research which is dated by now, as foeticide peaked during the 2000s and then dropped off—has discouraging findings. Female foeticide increases with easy access to medical facilities, ability to pay doctors and the availability of good roads, which cut down travel time, according to demographer Ashish Bose in his book Sex-Selective Abortion in India, based on fieldwork in Punjab, Haryana and Himachal Pradesh.

In short, progress means more girls could die. Modi's programme could mean a lot to Manseerat's future—but not in its current form. ¦

Kalra is a Delhi School of Economics alumnus who has reported for Reuters, Mint and Business Standard.

With additional research by Prachi Salve. Photography by Aparna Kalra.