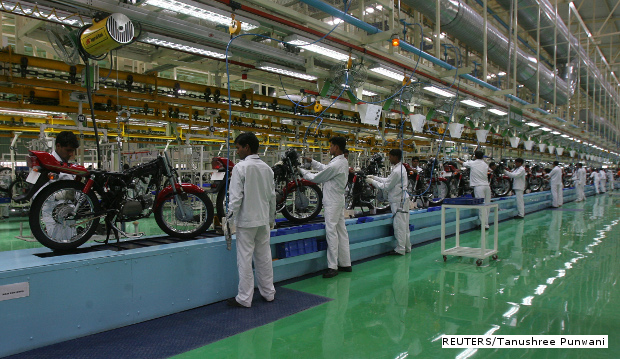 One, there is a slowdown in employment in the formal, organised sector (which in any case employs only 12% of India's labour force), the prime staging ground of Modi's programme. Data released by the Ministry of Statistics and Programme Implementation on Indian factories show that more than 400,000 people lost their jobs during the financial year 2012-13.

This cannot be a welcome development, given the focus on employment of Modi's Make-In-India programme, under which the Prime Minister wants manufacturing to account for at least 25% of GDP from the current level of 16% of GDP. 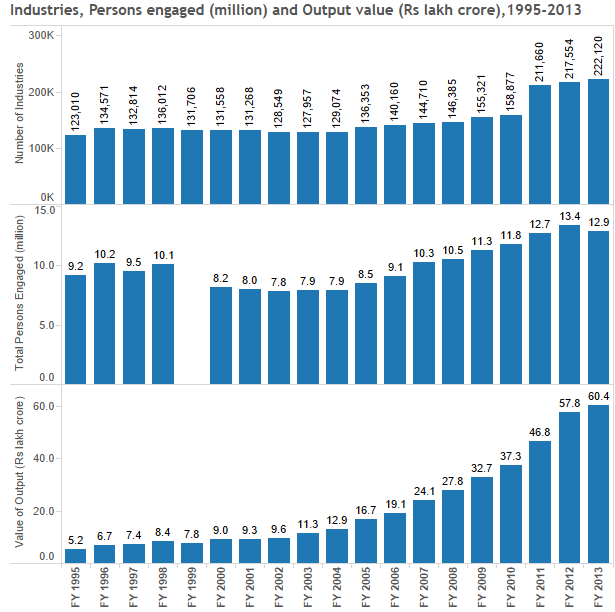 But taken from 1994-95, the growth of jobs in proportion to capital employed and value of output shows a much stronger downward trend.

Over nearly two decades up to 2012-13, this is what happened in India’s organised-sector factories:

Clearly, industrial India is getting more output per person engaged in its industrial activities. In other words, it needs fewer workers to do the same work.

Capital employed has been going up simultaneously across industries, which implies more automation and efficiency, thus reducing the need for workers.

“The unorganised sector, in particular the household sector, accounts for a disproportionately large share of employment but a very small share of value added in manufacturing," a working paper released recently by Indian Council For Research On International Economic Relations (ICRIER) has said.

Employment estimates indicate that between 1999-2000 and 2011-12, Indian manufacturing (organised and otherwise) added 1.4 million jobs each year, against the 12 million now needed. The sector now employs more than 60 million people.

The organised manufacturing sector for the same period increased jobs by 4.5%, employing 12.2 million in 2011-12, according to ASI's results, which record formal employment.

"While this was certainly not a period of jobless growth in the organised manufacturing sector, the rate of job creation falls severely short of the requirements of productive jobs for the 7-8 million youth expected to enter the job market each year in the next ten years,” the ICRIER paper said.

The study goes on to mention that much of the action for improving the business environment needs to be taken at the state level.

"Moreover, factors such as cumbersome product market regulations and infrastructural bottlenecks have also adversely affected the growth of the manufacturing sector," the study said. "The two new factors which have become increasingly important in constraining the growth of organised manufacturing are the difficulties in securing environmental clearances and acquiring land."

Globally, India is the 3rd largest employer in manufacturing, after China and the United States, according to this report by United Nations Industrial Development Organisation (UNIDO). That’s an improvement from the 8th position in 1970 and 5th in 1990.

Source: UNIDO; Russian Federation had 30,352,000 manufacturing jobs in 1991 and was second between China and United States with a share of 11%. The number of jobs has declined since.

Clearly, while employment is stagnant across industries–a cause of concern for those joining the labour force and the job-creation hopes of the Make-in-India programme–Indian industry is doing reasonably well, thanks to capital-intensive production methods and by moving labour from full-time employment to contracts.

This is the dilemma the government will need to address. As yet, it has revealed no such plans.