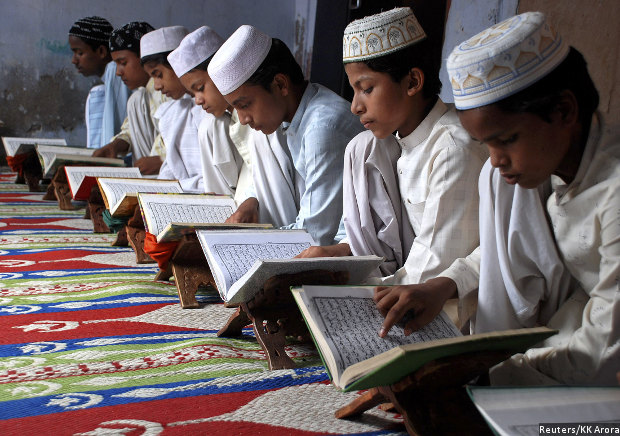 Muslim children read the Koran at a madrasa in the northern Indian city of Mathura. The government increased the spending on the Scheme for Providing Quality Education in Madrasas (SPQEM), launched in 2009-10, from Rs 46 crore to Rs 294 crore–a five-fold increase.

The government increased the spending on the Scheme for Providing Quality Education in Madrasas (SPQEM), launched in 2009-10, from Rs 46 crore to Rs 294 crore--a five-fold increase. Spending almost tripled in one year--2015-16--to Rs 294 crore from Rs 108 crore in the previous year.

"Under the scheme (SPQEM), financial assistance is provided to encourage traditional institutions like madrasas and maktqabs to introduce modern education in subjects such as science, mathematics, social studies, Hindi and English in their curriculum through support for teachers, books, teaching learning materials and computer labs," the minister said in his reply to the Lok Sabha.

Over 48,000 madrasas in Uttar Pradesh (UP) received financial assistance during the last seven years--the highest amongst all states--followed by Madhya Pradesh and Kerala.

"Since 1993, there has been a madrasa modernisation policy, primarily designed for azad madrasas. The idea was to convince them to teach modern subjects in lieu of state grants for books and additional teachers," wrote Arshad Alam, an assistant professor at Delhi's Jawaharlal Nehru University, in The Indian Express on July 25, 2015.

"But the policy treated madrasas as homogeneous, so grants were also cornered by state-funded madrasas," wrote Alam. "Also, a majority of the grants to azad madrasas have been utilised to hire part-time untrained teachers, which defeats the purpose of introducing quality education in these institutions. To top it all, madrasas affiliated to Deobandis and Ahl-e-Hadis completely refused to take part in this initiative."