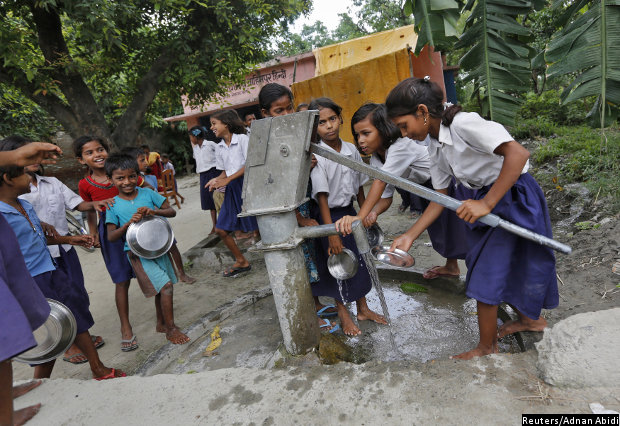 The north eastern state of Mizoram has reported a 13 percentage-point decline in stunting (below normal height for the age) and five percentage points decline in underweight children (underweight and short), according to a new report.

As many as 522 million people gained access to improved sources of drinking water between 1990 and 2000, said the report, published by the Public Health Foundation of India (PHFI).

Open defecation and inadequate hand washing have been cited as reasons for poor health among children, leading to undernourishment.

India’s 40 million stunted and 17 million wasted children below the age of five are a challenge for a country whose health indices lag its economic growth.

This is the third part in our series on child malnutrition in India based on the PFHI report, where we track the states with worst and best nutrition figures and sanitation data to examine the relation between poor nutrition and hygiene.

Not enough being spent on drinking water and sanitation

Poor sanitation makes for unhealthy children, susceptible to water-borne diseases such as diarrhoea, cholera and jaundice.

The United Nations' Millennium Development Goals (MDGs) had set a target of halving the population without sanitation facilities by 2015. UNICEF launched the Water, Sanitation and Hygiene (WASH) programme in 2006 to promote this goal.

The Government of India has been focusing on improving drinking water and sanitation facilities across the country since 1999.

The Total Sanitation Programme was launched in 1999 by the Atal Bihari Vajpayee government. It was changed to Nirmal Bharat Abhiyan (Clean India Mission) in 2012 and renamed Swachh Bharat Mission in 2014.

Almost 90% of child deaths from diarrhoeal diseases are directly linked to contaminated water, lack of sanitation or inadequate hygiene, a UNICEF report said.

Only 47% households in India had toilets, according to the 2011 Census data, an improvement of 11 percentage points over 2001 figures.

As many as 181.5 million rural households were surveyed in 2012 to assess the requirement of toilets in individual households; this survey served as the baseline for the Swachh Bharat Mission.

As on December 22, 2015, 93.1 million households in rural India had no toilets, according to government data.

As many as 46% households in India defecated in the open as of 2013-14, according to data from the Rapid Survey on Children (RSoC). This was an improvement of nine percentage points from 2005-06 data, when it was 55%

The states that were better-off in terms of child nutrition show a strong co-relation between sanitation and child nourishment.

The worst states in terms of nutrition parameters had fewer households with toilets.

After the Swachh Bharat Mission, since 2014, Bihar, Jharkhand and Chhattisgarh have managed to fulfill about 44%, 52% and 50% of the requirement as per the baseline survey.

Sanitation is only one factor affecting nutrition; for instance, data from what was once Andhra Pradesh show that the proportion of wasted children increased by six percentage points between 2006 and 2014, despite an improvement in sanitation.

Studies conducted in the past decade have emphasized on the need for sanitation to improve nutrition.

The example of Bangladesh is often cited. Between 1990 and 2012, open defecation dropped from 34% to 2.5% in that country, accompanied by a reduction in undernourishment, according to a report by International Food Policy Research Institute (IFPRI), the Washington-based think-tank.