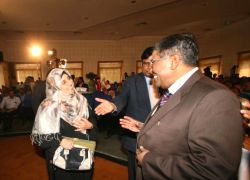 India’s Vice President Hamid Ansari speaking in Mumbai recently said ‘The Muslim segment of India’s population has lagged behind, is educationally backward and because of it cannot avail all the benefits that are available to its fellow citizens.”

He further highlighted the fact that the community had a lower literacy rate of 59.1% as compared to the national average of 64.8%. The community constituted only 31.1% of the organized labour force once again because Muslim youth have lower levels of educational qualifications.

The Government on its part has been steadily hiking the outlay for the recently created Ministry of Minority Affairs – from Rs 143 crore in 2006 when it was set up to Rs 3,531 crore in 2013, a several-fold increase. And yet, the outcomes don’t seem to match the increase in budgets, except in the case of education scholarships. Which possibly highlights the lip-service nature of the budgeting, rather than execution focused intent.

This is not the first time such concerns have been raised for the well-being of the Muslim and other minorities. Prime Minister Manmohan Singh had also launched a 15-point program based on the Sachar committee findings (2005) targeting mainly minority communities and their welfare.

This eventually led to the formation of the Ministry of Minority Affairs in January, 2006 for the welfare of the five centrally notified minorities i.e. Muslim, Christian, Buddhist, Sikhs and Parsis. The main objective of the ministry was to ensure a more focused approach towards issues relating to minorities and the formulation of overall policies as well as planning and coordinating them. 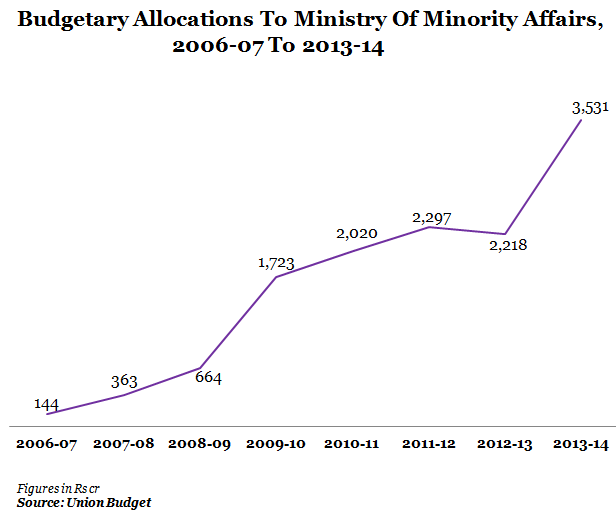 The ministry has been using the increased allocations by implementing programs like the scholarship schemes and also has been allocating money for the PM’s 15-point program which hopes to build social infrastructure like health care centres under the Integrated Child Development Scheme (ICDS) and housing like Indira Awas Yojana (IAY) schemes in minority dominated districts all over India.

Scholarships schemes are the biggest absorbers of the funds being given out by the Government. It must also be pointed out that several states have found bogus recipients for such scholarships. The scholarships are funded through a partnership of 75:25 between the centre and states. They are divided into 3 parts: Pre-matric scholarship, post-matric scholarship and merit-cum means scholarship.

The following graph shows the achievement of the schemes since launch: 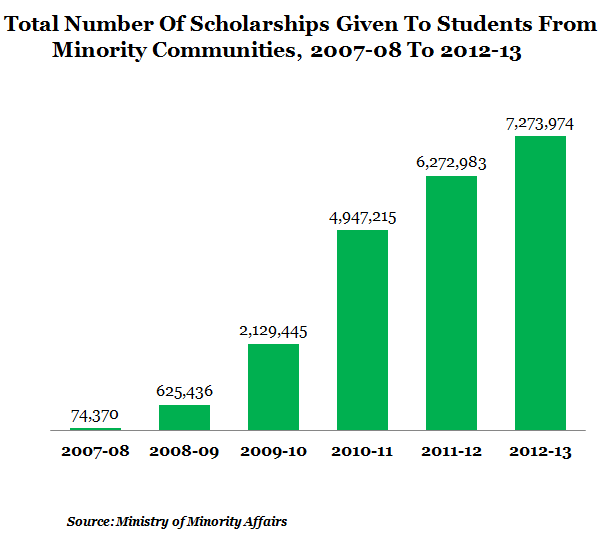 It can be seen from above that the total number of scholarship awarded to students has increased from 74,370 in 2007 to over 7 million in 2013. Moreover, the pre-matric scholarships have a larger share compared to other scholarship schemes while the merit-cum-means scholarship has the smallest share. The pre-matric (class I to class X) scholarship which was introduced a year later (i.e. 2007-08) went from 457,794 students to more than 6 million. This was the highest recorded increase among all the scholarship schemes.

The 15 point programme for minorities was launched by the Prime Minister Manmohan Singh in 2006. The program targets minority groups according to the Section 2(C) of the National Commission for Minorities Act, 1992 are the Muslims, Christians, Sikhs, Buddhists and Zoroastrians (Parsis).

In order to ensure that the benefits of these schemes like the IAY, ICDS or SJRSY flow equitably to the minorities, this program envisages location of a certain proportion of development projects in minority concentration areas and wherever possible, 15% of targets and outlays under various schemes such as the ICDS, IAY etc should be earmarked for the minorities. 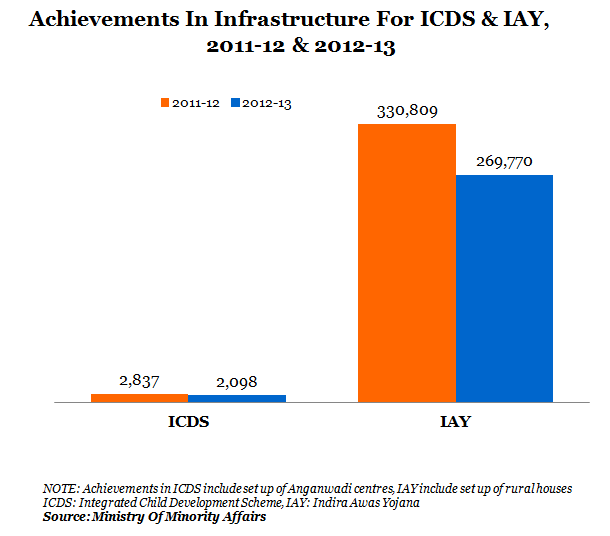 It can be seen from above that almost all the major programs under the PM’s 15 point programme have seen a reduction in their physical or financial achievement except the bank credit schemes from 2011-12 to 2012-13.

The ICDS has seen a reduction in the number of anganwadi’s or health & education care centres operationalised in minority concentrated districts (MCD) from 2,837 to 2,098.

The funds disbursed through Swarnajayanti Shahari Rojgaar Yojana have also seen a reduction of 18% during the same time period. Similarly, the Indira Awas Yojana has seen a reduction both in the physical achievement as well as financial disbursals.

The number of houses built in the MCD has come from 330,809 dwelling units to 269,770 during the same time period. This could be explained by the reduction in the financial allocation under the scheme has also come down from Rs 996.8 crore to Rs 644.4 crore in the same time period.

Evidently, the Minority Affairs Ministry does not have too much show in terms of outcomes. Equally, there is no specific study that has been done in recent years which would show whether the increased spending on Minorities through special schemes is benefiting and how.